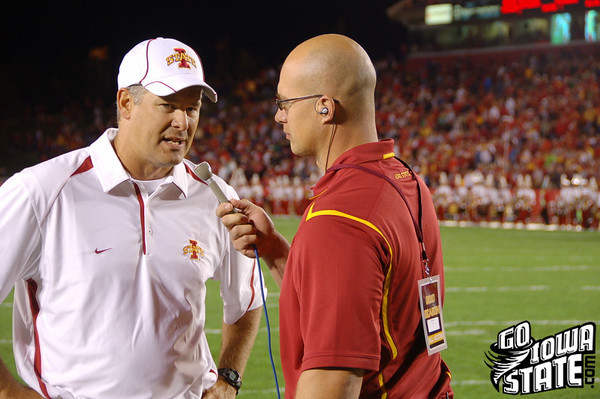 What a week for the Cyclones. That road trip to Norman was far from fun. While a loss is just a loss, and no one thought preseason that we would win that game, not much good happened on Saturday. Taking on the BCS number one in its homecoming game is hard…really hard. What’s even more hard, unfortunately, is that we didn’t improve. The goal for the season, as professed by the Cyclones, was to improve each week. While there has been progress in some areas, it is hard not to feel like the last two Saturdays were steps backward.

The thing that is tough for me is that I’m not sure you can or can’t take a step forward against a team with so many more tools than ISU has. I went into the game thinking we could take things further against the Sooners, so I was disappointed with the rout that I saw Saturday. While OU played flawlessly, ISU just had no spark. Our guys played hard. Our coaches had a game plan and tried to adjust to slow the Sooners. Unfortunately, our offense is just plain anemic. Our defensive line misses Nate Frere and Christopher Lyle – A LOT. Our secondary…well, they have to cover so long they’re being scouted by the cross country team.

Living through a beating like Saturday’s makes you feel like you may never get back up again. When we were building the program under Coach Mac in the late 90’s, we went through a lot of this kind of thing. People lost interest in us. We had to watch the guys across the way get all the press. Each week was a test of your resolve and manhood.

So how did we climb out of the hole we were in? In my first year playing, 1997, I was on a team that went 1-10. We got absolutely destroyed – by Wyoming. By the time I was a senior, we went 9-3 and won a bowl game for the first time in school history. Was it a BCS championship? No. But from where we were, it was a hell of an accomplishment.

This football team is 3-4 with five games to go. They went to a bowl game last year – and won it. Our coaching staff is fantastic. But our offensive system right now is like that old car that only runs really well when you least expect it to. This team doesn’t have the talent to beat the best of the best on our schedule unless our opponent makes huge mistakes; going into the season, I thought we would. It kind of takes me back. I’d hoped we wouldn’t be here again, but we are. And the Big 12 isn’t getting any easier next season.

My team agreed that we were going to eliminate the mistakes that had held us back. We agreed we were going to work harder than our competition. We agreed that we weren’t going to listen to people who said we weren’t good enough to compete…to beat Iowa, to go to a bowl game, to win a Big 12 north crown. Dan McCarney finished a couple of kicks short of our goal. How different the conversation today would have been had one of those blocks, tackles, catches, runs, etc., been made. But I wouldn’t change anything I did, and wouldn’t ask anything else of my teammates or the men that came before or went after me and my group.

Of the current Cyclones, I’ll ask this: Do what we did. Listen to your coaches. Believe in what they are preaching. Keep buying in. Work to be the strongest guy on the team, every time you walk in the weight room. Play smart. Treat the young recruits coming in the door with respect and hold them to the highest standards possible. Expect more from yourself than anyone else. Be willing to admit you were wrong. Lead from the front of the line. Learn the game so you know what is coming before it arrives.

If you’re a prospective student-athlete and want a chance to play early, want a chance to be part of something different, and want to play for a coach who will coach you to be your best because he wants to see the best for you (not because he wants to build a new palatial home outside of town), come to ISU. The road won’t be easy…nothing in life is. But I’ll promise you this: When you finally hang up your cleats, you won’t regret a thing.

I love ISU. It made me a man. Better days are ahead for the Cyclones, and the journey is the part my letterwinner brothers will remember more than the destination.