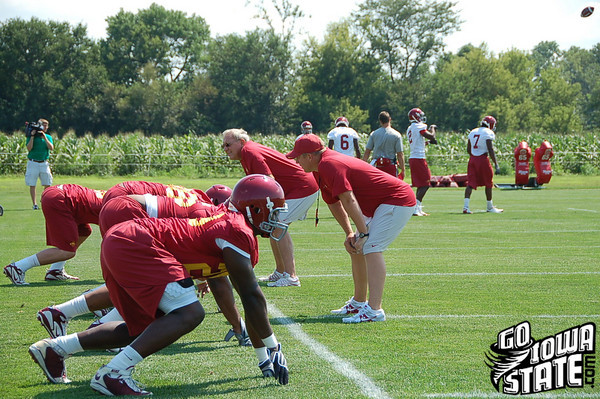 Iowa State officially began football practice today. Camp is now a thing of the past. You fanatics have read all of the stories. You’ve seen all of the interviews. You’ve taken part in all of the discussions. Fact or fiction? Contender or pretender? Here are my thoughts on a few of the hot topics that we’ve all been breaking down since camp began a few weeks ago.

…Iowa State’s defense averaged 1.23 sacks per game last season, a number that ranked them last in the Big 12 in that particular category.

I don’t think that Iowa State will be in the upper half of the league in this category at the end of this season, but I am sold that the defensive line will be better in Ames in year two of the Paul Rhoads era.

Chris Lyle led the team in sacks last season with an average of .38 per game. This year, Rashawn Parker will replace him. After last Saturday’s scrimmage, defensive coordinator Wally Burnham called Parker the “inspirational leader” of this defense. Physically, this is probably a wash. I don’t see one guy having much of an advantage over the other. Lyle had a better body but Parker brings other intangibles to the position. Parker is just so valuable to this defense from a leadership standpoint. That helps replace All-Big 12 linebacker Jesse Smith. So to me, this is an upgrade.

In the middle, there is no question to me that Jake McDonough is going to turn some heads. From what I hear, he’s very good. McDonough now weighs 288-pounds. That’s 20-pounds heavier than he was during spring ball. Read more about his weight battles in THIS STORY by the Ames Tribune’s Bobby La Gesse.

According to Paul Rhoads and Wally Burnham, Stephen Ruempolhamer had a beast of a camp at the nose guard position. Entering camp, I thought that senior Bailey Johnson at the very least had a shot to leapfrog “Rump” on the depth chart. That didn’t happen. Based off of what I’ve been told, Ruempolhamer has significantly gotten better at the point of attack. And keep in mind that he has been going head-to-head with some quality Big 12 linemen in Ben Lamaak and Hayworth Hicks. He hasn’t been feasting on true freshmen. I’m buying into the Ruempolhamer hype here, specifically since I think we all saw glimpses of how good he could be a season ago.

On the other end position, Patrick Neal and Roosevelt Maggitt will more than likely tag team that spot. They have to have gotten better than they were a season ago right?

In the end, it will all come down to depth on the line for Iowa State. I am buying into the starters being much better than they were a season ago. But they can’t do it on their own.

Guys like Taylor Mansfield and Bailey Johnson need to perform.

I’m still on the fence about…

…Sedrick Johnson finally producing on a consistent level at Iowa State. If you stand next to Johnson, you can’t help but notice that the guy is a freak of an athlete. At the very least, he looks the part. At 6-foot-3, 211-pounds, this junior just looks like an NFL wide receiver. He is healthy now after suffering from a high ankle sprain in game number one of last season. All reports coming out of camp state that he’s been outstanding over the last few weeks.

Will he stay healthy this season?

How consistent will Johnson be going up against Big 12 competition?

Those questions are still legitimate but all signs point to Johnson having a big season.

I fully expect Austen Arnaud to utilize the tight end position more in 2010 and in my mind, that makes Franklin due for a big season.

…Jeff Woody and Jake Williams. These Iowa boys are not flashy, but they are solid. Discussing who Alexander Robinson’s backup will be and Iowa State’s depth at wide receiver have been popular topics concerning Iowa State’s camp lately and the funny thing is that these guys are rarely mentioned. It’s because they aren’t flamboyant.

But when it comes to consistency, it is tough to beat these central Iowa natives.