Last Thursday night, 1460 KXNO’s Jon Miller emailed me about getting my "five most indispensable" Cyclones together Friday’s installment of Miller and Deace in the Morning. I was set to fill in for Steve Deace that next morning.

You shouldn’t be surprised when I tell you that Miller and I never got to that in last Friday’s program. Some other things came up. That tends to happen quite a bit in radio. So here we are now. I’ve put this list together in a column format. Feel free to post your own list as well and we can compare. This list can certainly be debated.

5 – Jake Knott, LB – This is a total leap of faith right here but I am going off of what people have told me more than what 2009’s numbers looked like. As a true freshman, Knott didn’t see a ton of time at linebacker, only totaling 23 tackles on the season. But if you look at Iowa State’s roster at linebacker for this fall, depth is hard to find. I think that Jake Knott will be the best linebacker on the team this year and he is a player that Iowa State just cannot afford to lose. Knott is now listed at 6-foot-2, 237-pounds and I predict that he’ll lead Iowa State in tackles. For the record, A.J. Klein gets an honorable mention on this list.

4 – Ben Lamaak, OL – Do you remember the game that Reggie Stephens missed last year at the center position for Iowa State? That was Iowa State’s 35-10 loss to Texas A&M on Halloween. Iowa State’s offense mustered up only 324 total yards of offense that day in College Station. In that contest, the line looked like a total mess and the loss of their leader was the main reason why. The head man on the 2010 offensive line will be Ben Lamaak, a 315-pound senior, who will replace Stephens. Lamaak has "pro prospect" written all over him.

3 – David Sims, SS – Well that was a close one. While 2009’s Big 12 Defensive Newcomer of the Year could very well miss some time in 2010 after his recent run in with the law, nobody anticipates his punishment to be more than one or two games. The reason Sims made this list is simple. He’s a playmaker. He’s really the only guy on Iowa State’s defense that puts the fear in an opposing offense. He’s a guy who can make a pick and then take it to the house. Leonard Johnson has the ability to join Sims in this company, but hasn’t yet due to some inconsistencies.

2 – Austen Arnaud, QB – This is all about leadership here fanatics. Austen Arnaud had a rough 2009 from a turnover standpoint. Throwing 13 interceptions in 2010 just won’t cut it and Arnaud, a fifth-year senior, knows that. But Arnaud is due. He’ll be in Tom Herman’s system for the second straight season and remember that Iowa State was a different team without him in 2009. If you think back, you’ll remember Arnaud’s lingering hand injury that probably impacted his play more than most fans realized at the time. While Jerome Tiller appears to have a great future in Ames, Austen Arnaud is a true leader on this football team. That is what makes him so valuable.

Poll: Who leaves the biggest hole? 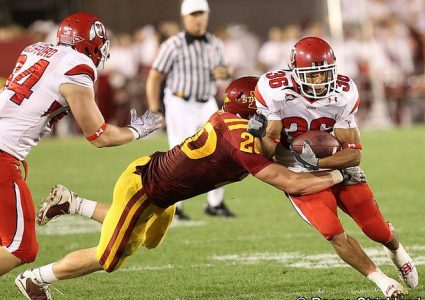