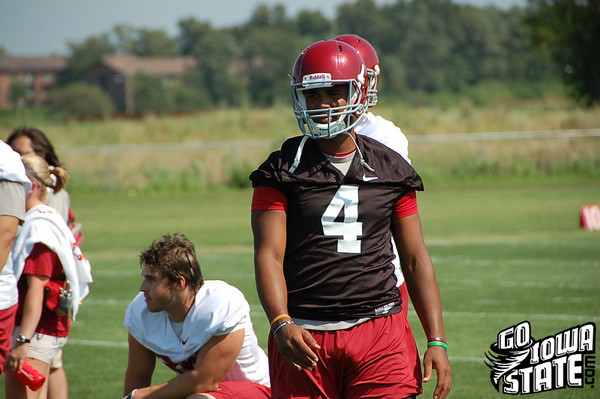 The defense won round one. That was the word coming out of Iowa State’s first scrimmage of the 2010 fall football camp on Saturday. But don’t panic Cyclone fans. That was the message that offensive coordinator Tom Herman sent out to the media afterwards.

“I think that we all forget sometimes that this is scrimmage one. This isn’t practice 28 of spring practice. This is still just practice 13 of the 2010 fall camp,” Herman said. “Our effort was there. I think that our guys understand the offense. I was much more pleased with the play of our quarterback in terms of understanding and not panicking and not making any stupid mistakes.”

Good and bad news came out of the scrimmage regarding Iowa State’s passing game. I’ll start with the bad and work our way to the positives.

Iowa State’s wide receivers have had a bad case of the dropsies over the past two weeks, especially on Saturday.

“Way too many dropped balls,” Herman said. “That was a display out there. I think that they are still out there right now doing ball drills. That was something that we have been bitten with during training camp, dropped passes. Boy, everybody had the bug today.”

A lot of those dropped passes are coming from Iowa State’s newcomers at wide receiver. Still, senior quarterback Austen Arnaud sees a lot of potential in guys like Jarvis West, Albert Gary and Chris Young.

The good news? It appears that Iowa State quarterbacks Austen Arnaud and Jerome Tiller have more of a grasp of Herman’s offense in August number two.

Running back battle heats up

Heading into Saturday’s scrimmage, Jeff Woody was listed as Iowa State’s second-string running back. If he’ll be number two when practice begins on Monday is a question. And trust me. Woody didn’t do anything wrong. The Iowa State coaching staff is as high on him as ever. Its just that the gap appears to be closing, as guys like James White, Shontrelle Johnson and Duran Hollis are having outstanding camps.

One reporter came out and directly asked Herman if the often talked about Johnson will be in the mix for number two.

“No doubt. Him and Duran Hollis,” Herman said. “Duran has been a very pleasant surprise this fall camp. He probably came in a little out of shape but has worked himself into shape. He ran the ball well these last few practices.”

Paul Rhoads also went out of his way to praise Hollis during post-practice interviews.

Watch Rhoads’ session with the media below.

Johnson and Hollis do different things well according to Herman.

“I think that Duran is probably very smooth and patient. He has good vision,” Herman said. “I think that Shontrelle is a little more of a slasher and a cutter. He can make guys miss maybe a little bit more in the open field.”

A young defense is making strides

Negative comments were hard to come by after Saturday’s scrimmage regarding Iowa State’s young defense.

“They are getting better. They really are,” Burnham said. “I tell you that first three will give some great effort and make some plays.”

Watch and see what Burnham had to say about the scrimmage below.

Depth is the big issue at Iowa State for linebacker. Freshman Jeremiah George has picked up a lot of headlines so far this summer but another rookie has stood out to Burnham so far. That’s Florida native C.J. Morgan.

“If you had to pick one of them, he (Morgan) would be the one that you would play,” Burnham said about Iowa State’s freshmen linebackers. “He has great athletic ability. We need that at that position. He just has to get in the weight room and get a lot stronger. He’s the most ready.”

–       Paul Rhoads told reporters that backup quarterback Jerome Tiller “tweaked” his ankle in the scrimmage. Rhoads went onto say that the injury is very minor and that Tiller should be ready to go for Monday’s practice.

–       Senior defensive end Rashawn Parker told reporters that his knee felt good after the scrimmage. “He (Rashawn) had a really good day,” said Burnham. Burnham and Arnaud also commented on Iowa State’s defensive line getting more pressure on the quarterback than they did at this time a year ago.

–       Burnham said that junior cornerback Leonard Johnson had an interception in the scrimmage. That’s just more evidence that Johnson has improved immensely since his sophomore campaign.