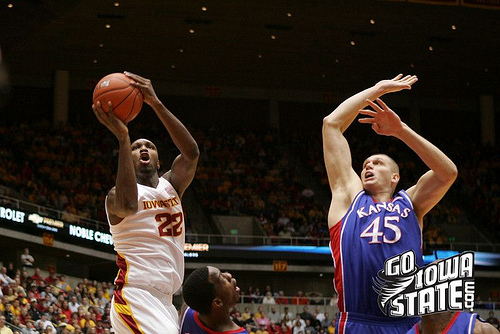 It is time for a positive right? It’s Valentines Day weekend! How does an upset of the top-ranked Kansas Jayhawks sound? Pretty good right? Is that possible?

Kansas has beaten Iowa State nine straight times in this series with the last Cyclone victory coming in Lawrence on Feb. 19, 2005. On Jan. 23, Kansas rolled into Ames and beat up on the Cyclones by an 84-61 final.

In that game, Kansas’ frontcourt dominated. The combination of Cole Aldrich and Marcus Morris scored 35 points while tearing down 18 rebounds. Then, there was Sherron Collins, who dropped 11.

On that day, the biggest difference between Iowa State and Kansas was depth. The Jayhawks had nine players play 10 or more minutes in the contest compared to Iowa State’s seven.

Not that there is ever a good time to play Kansas, but the Cyclones couldn’t have timed this game out any worse. The Jayhawks have won nine straight games heading into tomorrow, after defeating Texas 80-68 on Monday, in Austin.

Kansas will be motivated for another reason on Saturday as well. Bill Self is currently sitting on win number 399. He’ll get that milestone 400th victory with a win over Iowa State.

– Freshman Xavier Henry is averaging 13.3 points a game, a mark that is third on the team. Henry is widely regarded as one of the best rookies in America.

– Kansas shoots 48.9 percent from the field as a team. That’s the seventh-best mark in America

Breaking down the Cyclones
Randy Peterson of the Des Moines Register is reporting that LaRon Dendy will be back in Iowa State’s lineup on Saturday. That’s a relief. With an ill Scott Christopherson, Iowa State was essentially playing with six and a half players in Columbia on Wednesday. Dendy would have helped a lot in a contest that Iowa State had a legitimate chance to win, until the final minute. So that’s a positive.

Despite the losses that continue to pile up, Iowa State has been playing better as of late, especially defensively. The Cyclones only shot 32.8 percent from the field against Missouri, yet still had multiple chances to take the lead in the last 10 minutes of the game. Rebounding and free throws have improved for Iowa State over the past two weeks as well.

Now, the team’s strength at the beginning of the season has become a glaring weakness. The Cyclones can’t hit a 3-pointer. The Cyclones went 2-of-14 from behind the arc on Wednesday. It was only two weeks ago when Iowa State was the nation’s second-best 3-point shooting team, at 42.6 percent. In the past four games, the Clones have gone 13-of-64 from that distance. That is 20.3 percent.

Say what you want about the status of this program. Iowa State is 2-7 in the Big 12 and there doesn’t seem to be a whole lot of light at the end of the tunnel. Fans began the season dreaming of an NCAA Tournament run. Now, the NIT isn’t even a lock.

However, this team keeps playing hard. They aren’t winning, but the effort is there. I anticipate to see the same thing tomorrow but once again, Kansas’ depth will be too much. I expect the Jayhawks to outrebound Iowa State by 10-plus and have their way with the undermanned Cyclones. If Iowa State wants to have any chance in this thing, they absolutely have to start making some threes.