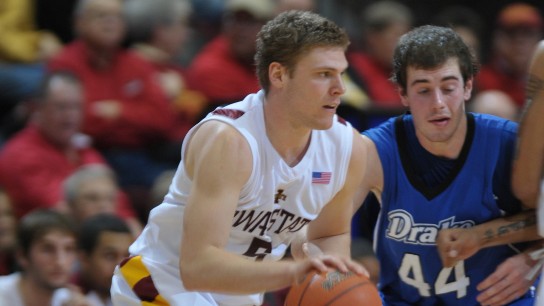 Coach Greg McDermott and the Iowa State men’s basketball team will tip off 2009 this evening when Black Hills State will invade Hilton Coliseum for an exhibition competition.

Below is everything you need to know about Black Hills State.

– Black Hills Sate is an NAIA school located in Spearfish, S.D. The Cyclones and the Yellow Jackets have never met on the hardwood before this evening’s contest. – Paul Sather, Black Hills State’s head coach, has some Big 12 experience. He worked as an assistant at Colorado in 2004. He was Greg McDermott’s assistant at Wayne State in the late 90’s. He also assisted McDermott for a time at Northern Iowa.

– Three All-Americans highlight the Yellow Jackets, who made it to the NAIA Final Four a season ago. At one point during last season, Black Hills State won 15 games in a row. They won 30 total on the season.

– Black Hills State has already picked up a win this season. The Yellow Jackets defeated Rocky Mountain College on Saturday night by a score of 91-87.

– Keep an eye on junior guard Cain Atkinson. He scored 26 points in Saturday night’s victory, while going 15-for-16 from the charity stripe.

– Will John Johnson, a 6-foot-8 junior will look to challenge Iowa State’s front-court this evening. Johnson tore down 348 rebounds last season, while averaging 10 a game.