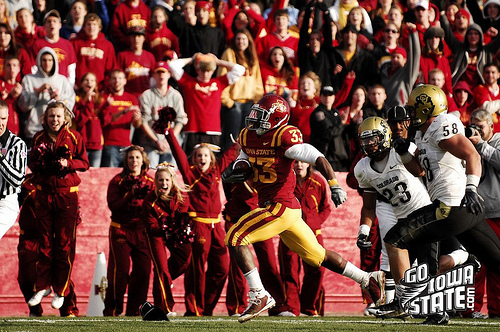 The Iowa State football team will hit the road and head to Columbia on Saturday for their final regular season game of the year. Both Iowa State and Missouri are coming off of wins last week over Colorado and Kansas State perspectively.

Here’s a look at this Saturday’s match-up, strictly through the statistics.

We’ll start with the positive news for Iowa State’s offensive performance, in their 17-10 win over Colorado. Alexander Robinson became the first Cyclone running back to rush for 1,000 yards in a season since Stevie Hicks did so back in 2004. Robinson ran for 138 yards against the Buffaloes, while also catching a 20-yard touchdown pass.

Iowa State netted 194 rushing yards against the Buffaloes as Austen Arnaud chipped in with 60 of his own. That puts Iowa State’s rushing yards per game average at 186.45, which is good enough to be ranked 28th nationally. With that average, the Cyclones are the second best rushing team in the Big 12, just behind Oklahoma State.

Iowa State’s play on the offensive line has visibly declined over the past couple of weeks and it’s showing in the stat book as well. Just weeks ago, the Cyclones boasted the top-ranked line in America as far as the stats show. They’ve now dropped to a tie for 14th, averaging one sack per game by opposing defenses. That’s still a very respectable number but due to injuries and maybe other circumstances, the offensive line’s production has dropped off.

Colorado’s Tyler Hansen threw for 258 yards and one touchdown against an opportunistic Iowa State defense. Meanwhile, the Buffaloes ran for 132 yards. Still, Iowa State’s defense forced three turnovers and played with authority in the red-zone to assure victory for the good guys.

After the Colorado game, Iowa State’s total defense is ranked 92nd nationally giving up an average of 403 yards per game. The Cyclones are 88th against the rush and 83rd against the pass.

Individually, Jesse Smith continues to be one of the top tacklers in America. His seven tackles on Saturday dropped his average to 10.64 per game, which ranks him 11th in America.

Missouri at a Glance

There’s good news and bad for Iowa State in this contest. The positive is that throwing the football has been Iowa State’s glaring weakness as of late. Missouri is pretty bad against the pass. This will be a nice opportunity for Arnaud and Co. to get the ball rolling.

The negative is that Missouri matches up well with Iowa State’s strength, which is running the football. Pick your poison.