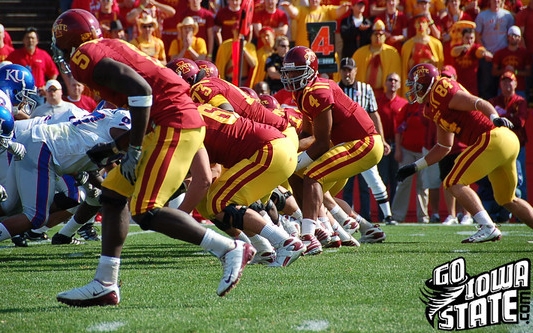 The grizzled broadcasting veterans took the young guns behind the woodshed in last week’s edition of our CycloneFanatic.com Experts Pick’em.

Ken Miller and Steve Deace of kXnO both went 7-2 on the week while Eric Murphy, Bret Meyer and myself all brought home respectable 5-4 marks.

Miller now has a seven game lead on the field! I might as well hand over the imaginary trophy now.

Oklahoma State @ Iowa State – Another heartbreaker for the Clones, Pokes win it late.

Kansas @ Kansas State – Bigger game than we thought it would be, JHawks.

Oklahoma @ Nebraska – No Bradford, no problem, Sooners open up a can.

Oklahoma State @ Iowa State – Yes, Okie State has better athletes than us, but on gameday, a team that plays together can overcome a team with talent and I’ve been really impressed with that aspect of the Cyclones this year. Give me the Clones but the question is do we rush the field after this game?

Kansas @ Kansas State – Hard to think this Wildcat team is atop the North after their early season struggles, but I think Kansas will play spoiler and get the W.

Baylor @ Missouri – Baylor continues to go winless in the conference

LSU @ Alabama – After the wake up call from Tennessee and a bye week, I’m liking the Tide in this one.

Washington @ UCLA – Give me the home team in this one.

Texas A&M @ Colorado – I heard Kenny Miller say that this one is the lock of the week. He obviously knows what he’s talking about so I’ll take A&M.

Baylor @ Missouri – Even the rebuilding Tigers will feast on the hapless Bears.

Oklahoma @ Nebraska – The lights of Memorial Stadium will only magnify the horrified faces of Nebraska fans as they sit through another home defeat.

Washington @ UCLA – Fading bowl hopes on the line. The Bruins win at home

Oklahoma State @ Iowa State – I suspect Arnaud’s timing will be off after missing two games, so Cowboys win, 27-17

Kansas @ Kansas State – Jayhawks are coming apart and K-State has some confidence after playing with Oklahoma so the home team wins, 31-24

Oklahoma @ Nebraska – Sooner defense too much for freshman quarterback, 26-14

LSU @ Alabama – Tide makes a statement after slipping in the BCS, 28-10

Kansas @ Kansas State – I’ve finally bought into K-State. Maybe Bill Snyder isn’t as old and washed up as I thought he was. Cats 27, Jayhawks 24.

Texas A&M @ Colorado – A&M by at least 20. That team is on a serious roll right now and Colorado can’t do anything right. Aggies 35, Colorado 13.

Oklahoma @ Nebraska – Should be an exciting evening in Lincoln. A lot of great defense will be played. Nebraska just might keep this closer than most thing. Oklahoma 21, Nebraska 17

Oklahoma State @ Iowa State – Beautiful weather, ABC telecast, top 25 team coming to Ames, bowl eligibility one win away. Too many reasons not be a great win for the Cyclones. Offense comes alive and wins a shootout. ISU 41- OSU37

Kansas @ Kansas State – Kansas State played OU tough on the road, has been the more consistent team all year. K-State wins at home.

Texas A&M @ Colorado – A&M has been playing well since the KState debacle, Dan Hawkins farewell tour has yet another bump in the road. A&M wins big in Boulder.

Baylor @ Missouri – If Robert Griffin were healthy, Baylor would be in every game they play. Unfortunately he’s not, Missouri wins at home.

Oklahoma @ Nebraska – Would be an intriguing matchup if Nebraska’s offense had a pulse. OU has a top 10 defense with NFL talent all over the place. OU hands Nebraska their third straight home loss.

Washington @ UCLA – Jake Locker and the Huskies win a close one at the Rose Bowl.