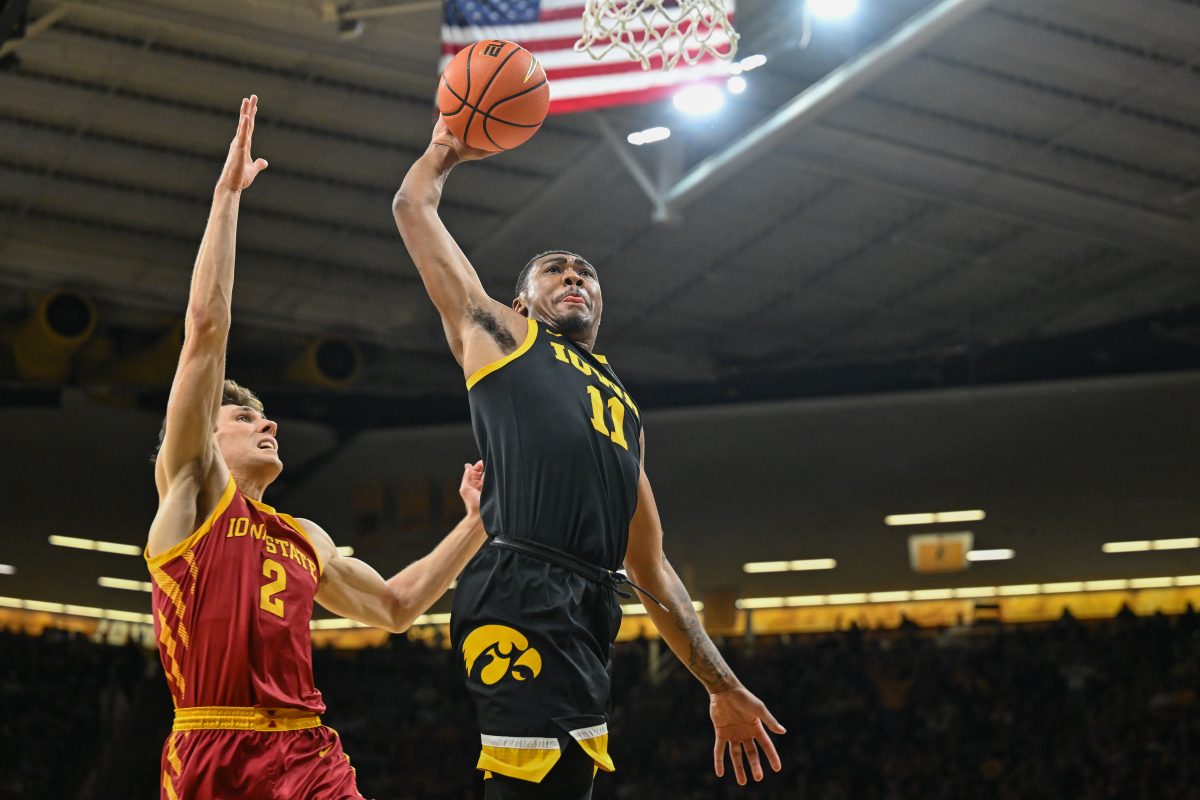 IOWA CITY — One minute and 11 seconds.

That’s how long Thursday night’s Cy-Hawk men’s basketball tilt in Iowa City was in doubt. That’s how long it took before Iowa’s Tony Perkins connected on a 3-pointer for the game’s first points.

Four minutes and 13 seconds later, the Hawkeyes held a 15-0 lead over the rivals from Ames. The Hawkeyes led by 20 at the half and by as much as 29 points in the second half on their way to a 75-56 win.

Iowa State was out-executed, out-hustled and out-everything’d. If it could go wrong for the Cyclones on this night, it did, and it wouldn’t be hard to make a case for this night being the worst of the T.J. Otzelberger era in Ames.

“For whatever reason, we came out defensively and were tentative,” Otzelberger said after the game. “We talked a lot going in about being the aggressor and our ball pressure that we do every single day. First time on the road for our group, and it seemed like it got to us. We didn’t set the tone with our defensive physicality and intensity that we usually do. As result, they had great confidence early and, and they carried that over.”

“We’ve got to be who we can be. That’s going to be a physical, tough defensive team. That’s not who we were out there tonight.”

Iowa deserves a lot of credit for what happened in this basketball game. The Hawkeyes were the aggressors from the opening tip and executed their offensive game plan to near perfection.

Fran McCaffrey’s team diced up Iowa State for most of the night with crisp skip passes over the top of the defense with adept shotmaking at a 50 percent clip from the field and 52.2 percent from 3-point range.

Filip Rebraca played one of his best games in an Iowa uniform while tallying a game-high 22 points and 11 rebounds to completely dominate the painted area.

The fact that Iowa did not have do-it-all superstar Kris Murray was totally irrelevant. The Hawkeyes didn’t need him in order to own the middle of the floor.

Robert Jones scored 11 points and grabbed 10 rebounds for Iowa State, but the majority of those came as empty calories once this game was well out of reach.

Iowa State’s frontcourt was completely neutralized and that inability to make plays near the basket was one of the key parts of the Cyclones tallying only two points during the game’s first 10 minutes.

“I felt like (Rebraca) was the more physical guy a lot of the night,” Otzelberger said. “I think when you do when you stack up effort based things, your confidence grows in the course of the game and, and then he was all over the offensive glass. He was effective in the paint. He had great intent to how he played.”

Perhaps, the battle of the backcourt was even worse.

Patrick McCaffrey led the charge for the Hawkeyes on the perimeter, scoring 13 points and knocking down three 3-pointers while his brother, Connor, added 14 points and Tony Perkins posted 10 points of his own.

Meanwhile, the Cyclones’ top guard options, Caleb Grill, Gabe Kalscheur and Jaren Holmes, combined to score 21 points on 9-of-31 shooting from the field and 1-of-15 from deep.

Iowa State’s lone saving grace outside was Tamin Lipsey, who tied for a team-high with 11 points, grabbed five rebounds and dished five assists.

Frankly, nothing about it was close. It was an ass-kicking up and down the floor at every position and will live as a game that Cyclones fans would prefer to forget for the rest of eternity.

“I don’t know. I don’t want to make any excuses,” Lipsey said when asked why things went wrong for Iowa State. “It’s our first true road game, and a rival team. The energy is just different. Obviously, we didn’t plan to go play like that. We practiced just how we practice every day. Today just wasn’t our night.”

How much should we take away from this?

That will be the big question over the next few days before Iowa State takes the court again on Sunday against McNeese State on Sunday at Hilton Coliseum.

Was this a case of Iowa playing its best basketball and just overwhelming an Iowa State team that was buried under an avalanche? Or was this indication of something bigger with this Iowa State team, something that could derail the program’s quest for back-to-back trips to the NCAA Tournament?

We probably won’t really get any further answers to those questions until Baylor visits Hilton Coliseum on Dec. 31 for the Big 12 opener. The Cyclones have three games before that, and they’ll be heavily favored in each one.

The bad taste of this game is going to linger.

Iowa State was so thoroughly out-played. They were physically dominated and looked to be a step slow all night. Iowa punched the Cyclones in the mouth in the game’s opening minutes and never relented.

Iowa State hit the canvas in the bout’s opening rounds and never regained balance until the clock hit zeroes.

“I’d say they just had their night, I guess,” Jones said. “Everybody’s gonna have a good night. There’s people on the scouting report hitting shots that wouldn’t normally hit shots in a game. They’re shooting 55% from three. That’s tough to guard (no matter who) you’re playing. It was just their night and it’s hard to stop that.” 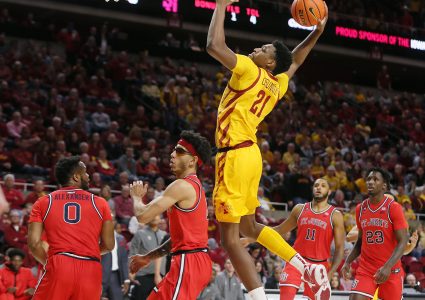 STANZ: Cyclones dominant from start to finish against St. John’s