Iowa State’s spring football period is officially underway and the program is set to bring in its first wave of visits for the period this weekend.

On the list is a priority target in in-state prospect Kai Black out of Urbandale. The three-star wideout and No. 5 prospect in Iowa owns offers from Iowa State, Iowa, Minnesota and Kansas among others.

Black is the only prospect from the state in for a visit this weekend, but there are still some familiar names coming into Ames.

The highest rated prospect taking a visit comes with four-star defensive lineman Edric Hill, who boasts offers from Alabama, Oregon, Iowa State and more. The 6-foot-7, 271-pounder is rated as the No. 7 prospect in Missouri.

The Cyclones will also be bringing in three more defensive lineman for the weekend, as well as an edge rusher. Three-star prospects from Fort Lauderdale, Fla. in Jason Hammond, Belleville, Ill. in Anthony Cunningham and Moorehead, Minn. in Elinneus Davis will each be in attendance.

A three-star edge rusher out of Olathe, Kan. in Jordan Allen will also visit for the weekend.

Two of the other athletes visiting each come out of Wichita, Kan. in 6-foot-6, 220-pound tight end Will Anciaux and 6-foot-2 ATH Wesley Fair.

Anciaux has offers from Iowa State, Kansas, K-State, Memphis and Michigan State while Fair owns scholarships with both Kansas schools as well as Harvard.

Each athlete set to visit this weekend belongs to the 2023 recruiting class, much like 6-foot-7, 270-pound offensive tackle Brock Knutson. The Scottsbluff, Neb. native has been acquiring offers through the winter months, recently being pitched by Wyoming.

Cyclone Fanatic will have more updates on the 2023 recruiting class as they become available.

Recruiting: Group of prospects set for weekend visit to Ames 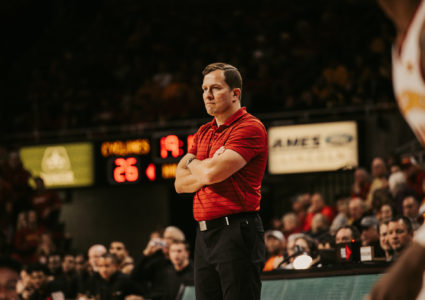