Iowa State opened the Big 12 season at Hilton Coliseum with a 26-9 win over the North Dakota State Bison.

Head coach Kevin Dresser continues to be pleased with his team’s growth but knows they’re capable of taking it even a step further.

“You know, I like our progress. I wish we could have separated ourselves a little bit more in some of those weights,” Dresser said. “I just don’t like winning by six or seven. I think you have to work hard to win by eight.”

Only one guy had that type of performance Dresser was looking for and it was at 184 pounds with No. 9 Marcus Coleman. He was the only wrestler to bring in bonus points for the Cyclones with a perfect 16-0 tech fall win which he secured in 5:15.

But, it was No. 14 Yonger Bastida who had Hilton Coliseum on their feet in today’s dual with a 9-6 win over No. 23 Owen Pentz.

What pushed Bastida in today’s dual can be credited to the confidence he felt while wrestling on the bottom.

In a bold decision, Bastida made the choice to start on the bottom going into the second period. That is something the coaches have shied away from with him when he faces tougher competition. He is more dominant when beginning neutral which is something that comes from his transition between wrestling styles.

“My confidence on the bottom today was really high,” Bastida said. “It’s one of the most important things we’ve been working on.”

Dresser felt a bit hesitant when Bastida made the call but luckily it worked out in ISU’s favor as the Cuban was able to secure a reversal and a takedown in the second period.

“I didn’t know whether I should go kick him in the butt or be excited. He got out so I’m excited,” Dresser said. “But, if he wouldn’t have I would’ve kicked him in the butt. But you know, you can tell he wants to be challenged. He knows where he’s good. But he really wants to ride and he wants to get away and so we’re kind of letting him feel it. That guy’s pretty savvy on top. That’s probably one of the best guys he’s got away from. I think you can see a guy get confidence. And as he gets confident, he’s going to be a threat. I mean he doesn’t like to lose. He’s a competitor. And that you can’t teach.”

No. 10 Iowa State will next hit the road to Oklahoma to face-off against both No. 20 Oklahoma and No. 4 Oklahoma State. 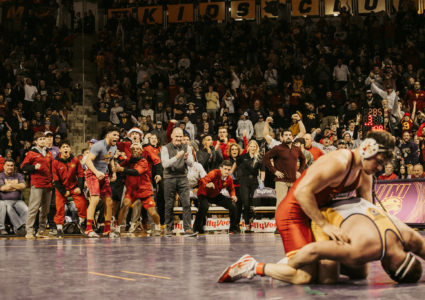 No. 5 Iowa State defeats No. 18 Northern Iowa in Cedar Falls No. 6 Iowa State defeats No. 12 Cornell at Collegiate Duals to face No. 1 Penn State in Championship round.