You could see Brock Purdy’s eyes light up as a broad grin crossed his face.

The fast, powerful and explosive Silas (5-8, 185) stood out as one of several young and promising players for the No. 14 Cyclones who were able to grace the field at Allegiant Stadium in the fourth quarter.

Head coach Matt Campbell and his staff also nodded approvingly as that “we’ve got next” group of freshmen was rewarded for its hard work in the offseason, and offered a glimpse of what’s to come for ISU once its senior-laden starting units exhaust their college eligibility.

“We’re still in the early part of the football season. We’re still trying to identify who this team is. In the past, we’ve gotten to week four, five or six and somebody has to step up into a critical role and play on our football team,” said Campbell, whose team begins Big 12 play Saturday at 2:30 p.m. at Baylor. “To be able to get those young guys game experience shows us a little more about who some of those young guys are. Some of these guys are demanding to be on the football field. You talk about (defensive back) Myles Purchase and what he’s done in three weeks on our kickoff team, then the plays he makes against UNLV — he covers the guy on fourth and one on the out route. He’s growing into a role.”

So is sophomore cornerback T.J. Tampa, who made his first career start in place of injured senior Datrone Young. Young is questionable for Saturday’s game against the Bears, but Tampa’s continued development helps make “Speedy’s” short-term absence manageable.

“T.J.’s a guy when you talk about rising stars in our program, I feel like he’s one of those guys.” Campbell said. “What he’s done in terms of his length, ability and speed, man I thought he was incredible. We’ll need T.J. and we’ll need ‘Speedy’ (a.k.a Young) down the road, but how big for us to get T.J. into the game and to get Myles Purchase in the game and D.J. Miller did some good things for us. We feel really confident about the depth of that secondary unit and we know it’s going to get tested as we get into Big 12 play and as we get into this week.”

That’s true across all three phases of the football team, but Campbell had more to say about one true freshman safety and a handful of others.

“Beau Freyler, man he’s had more kickoff tackles than anybody on our team,” Campbell said. “He’s been physical and he’s earned the right to get time at that middle safety spot. Everybody is really excited about where he’s at. Jaylin Noel, Deon Silas, Eli Sanders, those guys are all exciting. Then you talk about the redshirt guys like Hunter Zenzen, who just continue to do their job on special teams. It’s the natural growth process in our program. If you can handle your role and responsibility, even if it’s small, then we’re willing to help get that guy even more opportunities. I’m really appreciative that our guys have bought into that model and it’s fun to be able to reward them and see them handle the opportunities that come there way. All the guys I’ve talked about have earned the right to get themselves on the field and they’re forcing the hand of the coaches to say, ‘Hey, you have to play me.’”

Silas totaled 32 yards on five carries and was the only one in that group that could celebrate a first career touchdown. But there’s so much more to come from an array of other young talents. They’ll likely be ready, as needed, which is a development within Campbell’s program that largely explains its unprecedented four season-long (and counting) string of success.

“We’ve got guys that can come in and play and compete,” said Purdy, who threw for three touchdowns in Vegas. “I feel like all offseason we’ve been talking about the depth that we’ve got and stuff and Saturday we finally got to see it. … This Saturday, it’s gonna be the same thing. If someone goes down or if we need a young guy to step up, the guys are ready. I think they proved that on Saturday. They can go play college football, so we’re excited about it.”

Baylor ranks seventh in the FBS in rushing yards per game (332.2), but haven’t remotely faced a defense like ISU’s. The Bears’ Abram Smith, Trestan Ebner and Taye McWilliams ran roughshod over Texas State, Texas Southern and Kansas in the first three weeks, but the guys up front have impressed Campbell the most.

“I’m beyond impressed with certainly the offensive structure that they have right now and what’s going on there,” Campbell said. “New hire as the offensive coordinator from a year ago. I think the rhythm that they’re playing with on the offensive side of the football in terms of the ability to run the football really sets their quarterback up to be in really positive situations throughout the football game. I think that whole rhythm of what they’re doing offensively has certainly led to them (being able) to get off to good start. Impressed by the (top) two backs. Both of them are different, but both have the ability to hit the home run ball. You see that not only in terms of offensive production but you also see it in terms of special teams production.”

As noted above, Datrone Young is working his way back to gam-ready status after sustaining an undisclosed injury a week ago, so he’s “day-to-day.” The same could be said for senior MIKE linebacker O’Rien Vance, who hasn’t played since the Cyclones’ 16-10 season opening win over Northern Iowa.

“Sunday we were able to get out there and do a little bit and he was out there with us, which was awesome,” Campbell said. “I fully expect him to be part of practice this week and it’s still the mindset of, man, it’s still the early part of the season, this is a huge football game, if he can play we’ll be glad to have him, but if we’re going to put him in any risk that he can further injure himself, then we certainly won’t do that as well. I’d still say he’s gonna be a game-time decision.”

ISU’s defense has only forced three turnovers through the first three games, but has otherwise been stellar. The Cyclones rank first nationally in total defense (194.0 yards per game) and are in the top five in several other key statistical categories. And even its relatively low takeaway rate requires a nuanced view when it comes to evaluating that stat.

“I think that sometimes that’s hard because one thing that you’ve gotta look at is they played, what, 50-some snaps last week?” Campbell said. “So I think the reality for what we’re doing on defense, I almost equate three and outs with a turnover in the football game. I think what they’re doing getting off the field, they’ve been exceptional for us. The turnover margin in general needs to be better. I think we’re at minus-two right now and two weeks ago (minus-four vs. Iowa) hurt us and hurt that margin, so I think that number is something we talk a lot about in our football program and it needs to be better. But those are things from a defensive perspective, sometimes those hidden things of three and outs, playing less plays because they’re getting three and outs, I think that sometimes skews the turnover margin.”

To wit, in 34 offensive drives by Cyclone foes this season, 15 have ended in three and outs (xx %).

“T.J.’s a long, physical corner that can move. He can cover tight ends, he can cover the small dudes. He can play zone, he can play man. He can do it all.” — ISU senior cornerback Anthony Johnson on fellow corner T.J. Tampa. 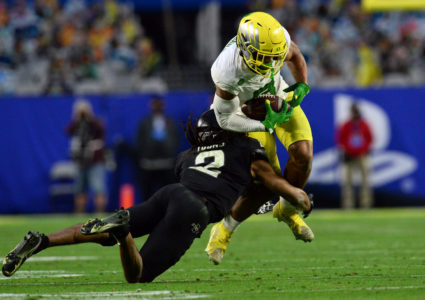