During the month of January, Iowa State played four games against No. 8 Baylor and Texas – two of the top teams in the Big 12.

That’s got to mean that the hard part of the schedule is over, right?

“The good news is that we don’t have to change the game plan completely,” Iowa State coach Bill Fennelly said. “The bad news is that we’re playing a great team on the road and we haven’t seen West Virginia yet.”

After an 0-2 start to Big 12 play, the Mountaineers have gone on a roll.

The team vaulted into the AP Top 25 poll this week after winning its eighth-straight game since losing to Oklahoma State in December. Seven of those games were conference matchups.

“There’s a short turn around, but it definitely helps that Baylor and West Virginia are two very good and similar teams,” Senior Madison Wise said. “They’re both big and aggressive so it helps (us out) a lot.”

One thing that helped the Cyclones in each game against the tall Baylor team that they beat in Waco was having the ability to draw fouls.

It’s become a big advantage for Iowa State when the team can get to that free throw line in games where they face a size disadvantage.

“That’s a huge part of what we want to do,” Fennelly said. “We want to spread the court, create some matchups for (Joens) to get fouled, and we want to do a better job of driving to the basket to get (those fouls).”

That’s not to say that the matchup will strongly favor the Cyclones.

Iowa State gave up 23 offensive rebounds to Baylor in its last game, and it’s become a major focus to fix the issue going forward.

“We out-rebounded Baylor at Baylor and then (Sunday) we got killed,” Fennelly said. “I think it’s just the consistency of the want to do it and not look to someone else when the balls there.”

In fact, Fennelly noted it’s not the post-play where the team will improve in offensive boards.

Iowa State doesn’t have the size for that.

He’ll instead call for the guards to stay back and rebound much more than what was seen on Sunday.

Iowa State will go into Morgantown on Wednesday with this in the back of their minds and a whole lot of heart needed.

It’s what kept the team in the game against Baylor.

“It just starts with heart,” Wise said. “They’re clearly a lot bigger, but just getting in there and boxing out as hard as we can (is huge). Having our guards come in and rebound as well helps the size disadvantage. Just having all five of us going into rebound (will help).”

That’s something that Iowa State at least showed in the pair of games against Mulkey’s squad this season and a big positive to take into the remaining games on the regular-season schedule.

The team shot well, performed at the free-throw line, hung 77 on Baylor – it was by most facets, excluding the offensive boards, a great game.

“Losing is not any fun, but our team showed some competitive spirit and some resiliency that we talked about pregame, so (we’re) pretty proud of that,” Fennelly said.

If Iowa State can keep that up on Wednesday, there is a good chance to record another big win this year.

That doesn’t come, however, if the Cyclones can’t fix the rebounding. 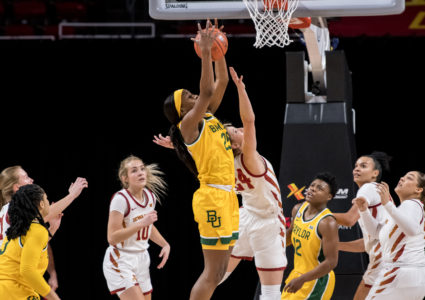