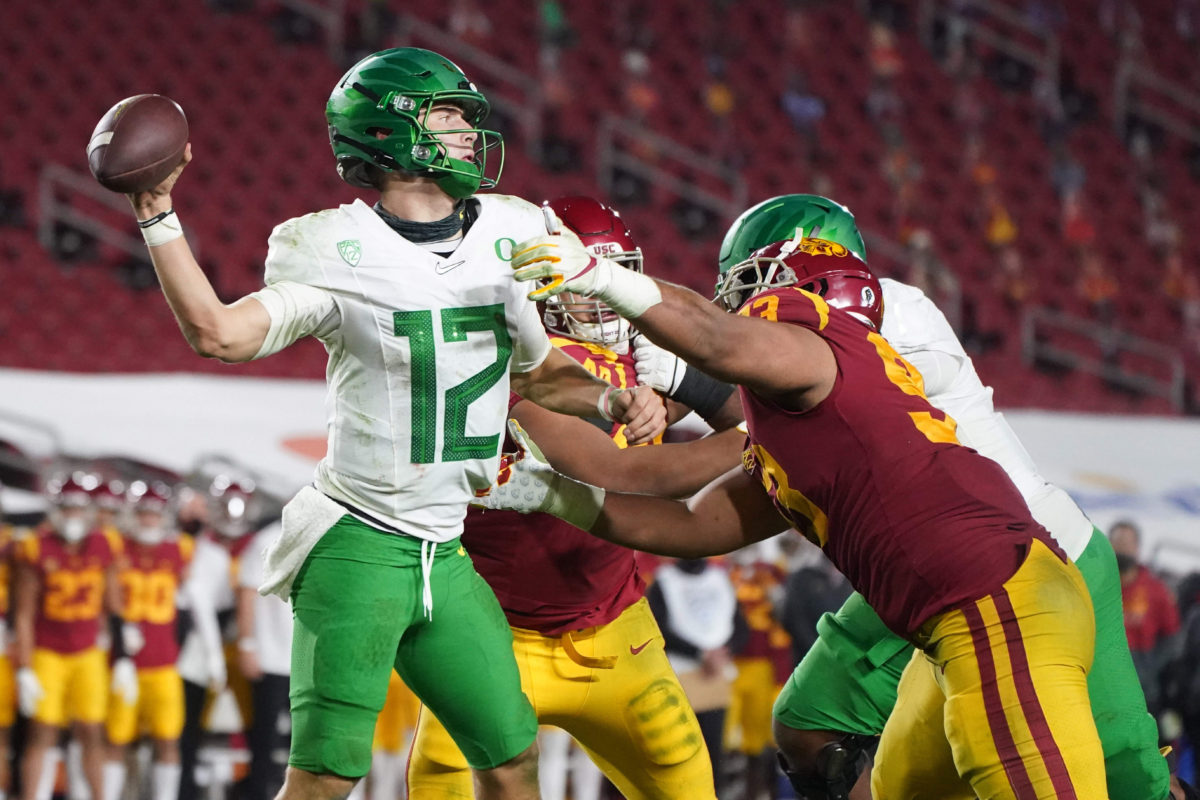 Who’da thunk that the most mysterious team Iowa State would play all year wouldn’t be a team from Cajun country but a prominent name in college football?

Iowa State plays Oregon in the Fiesta Bowl this week, and a lot of Cyclone fans are wondering what there is to know about these Ducks. Well, the answer is one giant mixed bag.

Defensively, Oregon has been both abysmal (most specifically in the middle two games of the season, UCLA and Oregon State, where they gave up more than 265 rushing yards in each) and very stout (most specifically the last two games where they allowed 271 total yards to Cal and then forced 3 turnovers, held USC to 360 total yards and only 28 rushing). Because of this disparity between great and awful, it’s really hard to pin down “accurate” averages.

So since statistics really aren’t much to rely on, what are we looking at with an up-and-down Ducks team?

Oregon doesn’t actually run that many plays. They actually run fewer offensive plays per game than Iowa State, and we all know that Iowa State isn’t exactly the quickest tempo offense in America. The Ducks are deliberate with their setup and usually have at least one tight end in the game. This isn’t Chip Kelly and Marcus Mariota’s Duck offense. The goal from Mario Christobal’s offense is to do things similar to how Iowa State does them.

The Ducks’ offense is absolutely run-first, and it comes from a pistol alignment much of the time (although not exclusively). They have three different running backs, all of whom do something totally different. Cyrus Habibi-Likio is the power back, CJ Verdell is their all-around back who will probably get the most consistent play, and their home-run hitter—and in my opinion, the scariest offensive threat on the team—is Travis Dye. Dye has over 600 all-purpose yards in 6 games by way of 7 yards per carry and more than 27 yards per reception, including four receiving touchdowns.

Schematically, when you think of Oregon’s offense, think of a scheme somewhere between TCU and Oklahoma State with a ton of talent and way less consistency. Like the Cowboys and Frogs, the Ducks like to come straight downhill with big bodies in tight formations. They figure that their speed (like how OSU views Chuba Hubbard) only needs a small missed alignment to shoot a crease and then outrun the opposition to the endzone.

They also prefer not to have true dropback passes more often than absolutely necessary. There was a bit of “controversy” after the Pac 12 Championship game that there may be a replacement at quarterback after Tyler Shough’s inconsistent execution. That speculation was quickly squelched, but those types of rumors don’t come out of places like Gainesville or Austin this year.

Where Oregon thrives is in short and intermediate passing, run-pass-options (RPOs), and in the run game. Where they struggle is in downfield passing. Iowa State wrenches in to force you into doing the thing you want to do the least. Expect to see solid fundamentals and looking to stop the run, first and foremost.

So what does ISU need to do?

1 – Fundamentals in the run game must be applied. There is too much explosiveness for Iowa State to be lackadaisical. However, Oregon has shown that they are their own worst enemy in a lot of games. So by Iowa State doing its job in the run game (for more info, read the OU defensive preview), they enable themselves to be in favorable down and distances.

2 – Force a big number of third-and-longs. If Oregon is in an average yards-to-go distance on 3rd down of more than seven throughout the game, they are being forced into the exact thing they don’t want to do.

Oregon on defense has been equally as up and down. As mentioned earlier, there have been wide variances between good and bad. And the difficult part in assessing this matchup is a relatively small sample size on top of this inconsistency. It’s difficult to see which games are anomalies and which are trends. Which are opponents with deficiencies; which are great games by the Ducks? Really hard to tell.

But here’s what we do know: Oregon runs a variation of a 3-4 defense and, boy, are they fast. Kayvon Thibodeaux, their All-American edge rusher, is basically Will McDonald with a bit more beef and plays a down linebacker. Their linebackers are young (sophomore-freshman-junior-sophomore across the board), but two of those four were five-star recruits. Their secondary is aggressive and, well, fast.

I always want to be forthright with you, Cyclone Fanatic readers. There are so many things about this defense that are “TBD” that it’s nearly impossible for me, without game film, to break down. So here’s what I’m looking for, generally.

1 – Iowa State has big, gashing runs frequently. With the three tight ends going up against a talented, but young, linebacker group, there are a bunch of opportunities for the Ducks to get confused and miss a gap. Breece Hall is excellent at finding those holes when they open. So with all the trading and shifting Iowa State does, there is a chance for an inexperienced linebacker group to get confused.

2 – There aren’t many true dropback passes. Oregon’s speed and raw talent at defensive end and linebacker are not elements you want to cut loose. So being in long down and distances means that regardless of which Ducks team shows up, you’re enabling the best talent to shine.

3 – Turnover margin favors Iowa State. Iowa State either doesn’t turn it over at all or turns it over in bunches. Oregon is in the same boat.

The unknowns make this game fun to me. We all know what Iowa State will bring to the table. Not knowing what Oregon will bring is exciting.

But it’s gonna be a party Fiesta.