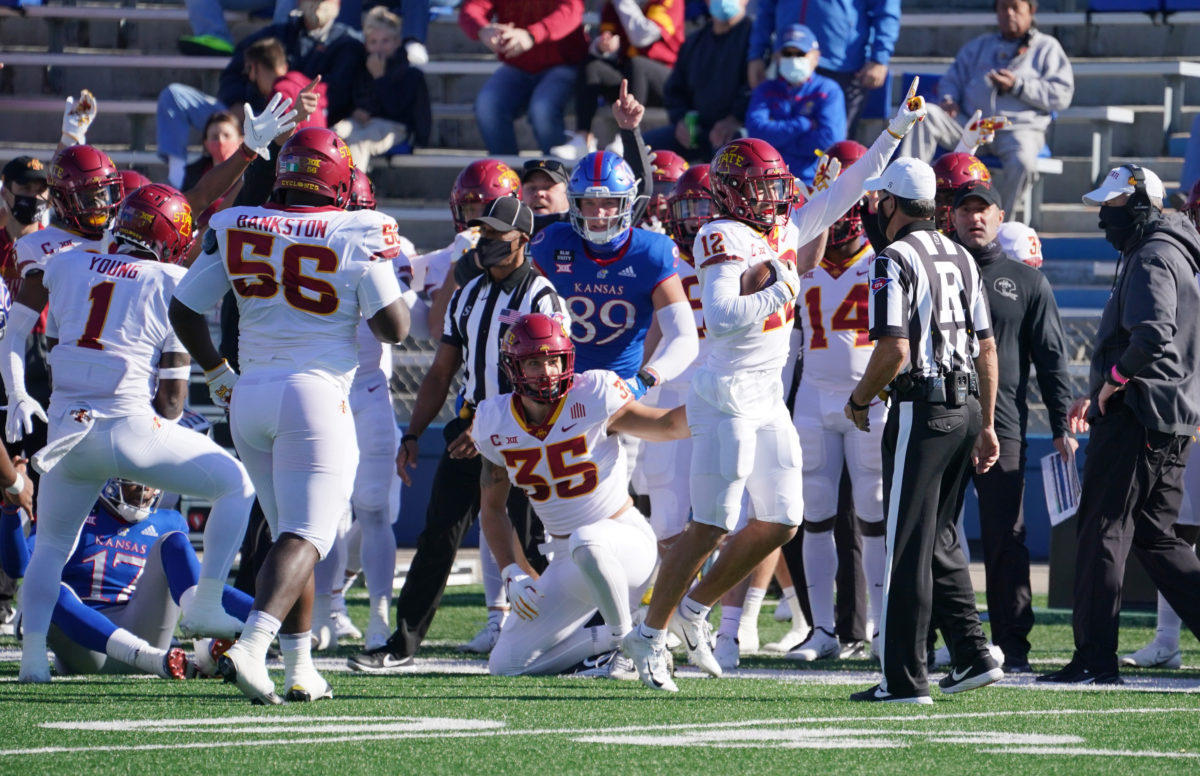 Star linebacker Mike Rose — along with the rest of his teammates — takes that directive to heart.

“Coach Heacock always stresses that it’s going to come (down) to the defense to close the game out,” Rose said on the Cyclone Radio Network after yesterday’s 52-22 win over Kansas.

The Cyclones’ defense did that with gusto against the winless Jayhawks, who used a special teams touchdown and two good drives to make the game semi-competitive, at 38-22, with just over seven minutes left.

On first down, JaQuan Bailey and O’Rien Vance teamed up to drop dual-threat KU quarterback Jalon Daniels for a 10-yard sack. Moments later on 3rd and 20, Will McDonald surged into the backfield and sacked Daniels for a three-yard loss and forced a punt.

“It was just one of those series where we knew we needed to step up and things went our way,” said Rose, who leads ISU with two interceptions this season.

It took the offense just one play — a 58-yard run from Breece Hall — to score a touchdown, put the game fully out of reach and give the Cyclones their sixth straight win over the Jayhawks.

Special teams aside (a missed PAT, the fifth non-offensive touchdown of the season given up), both offense and defense formed that yin-yang balance; a sort of synergy that exists when ISU is playing at its best.

And that showed most down the stretch as ISU forced two three and outs and added a pair of touchdowns to breeze to the 30-point win.

“We just made sure that everybody was calm and ready to play the next play,” said senior tailback Kene Nwangwu, who ran for a 24-yard touchdown. “Whatever the last series was, when we came back to the sideline we got together and just made sure, hey, next drive, we’re just going to go out and play Iowa State football.”

It’s happened fast, but Will McDonald has already carved out a spot in the top 10 among ISU’s greatest pass rushers. The 6-4, 230-pound sophomore talent plays situationally, but his production in those moments has been remarkable. He’s totaled 10.5 sacks in his past 10 games and 12.5 in his career. That ranks eighth in Cyclone history — and he’s 11 behind all-time leader JaQuan Bailey, who extended his school-record totals in sacks to 23.5 and tackles for loss to 42.5 in the win.

Breece Hall set a career-best single-game rushing mark with 185 yards in last week’s 24-21 loss at Oklahoma State. Saturday, he matched that personal best in a blowout win over Kansas.

“We just came out with a punch-them-in-the-mouth mentality,” Hall said in the postgame news conference. “We just came out, we were playing hard and after that it just really got frustrating because we were stalling out drives and everything, but honestly, all it took for us to (get back on track) was to stay true to what we do.”

Hall sits second in the country in rushing yards (901) and boasts 11 rushing touchdowns in six games this season. He’s failed to eclipse 100 yards on the ground precisely zero times in that span — and the last ISU back to accomplish that is Darren Davis (the first seven games of the 1999 season).

“Running the ball, we’ve been really successful these past couple games, so it’s been fun,” Hall said.

The Cyclone Radio Network’s Eric Heft asked senior safety Greg Eisworth — who had an interception and a fumble recovery Saturday — about possible differences between this year’s team and last year’s team. Eisworth’s response:

“I think the difference is the veteranness and experience. Every year you have a group of seniors that are good leaders, but I think this year’s senior class is really taking ahold of that. We’ve been here for a while. We’ve been in this position before. We’ve been here in November, having a shot to get to the Big 12 (title game). We know what it feels like. So we’re trying to help the younger guys and bring everybody else along and just say, not really pay attention to the scoreboard or look too far ahead, but just maximize each day. … Trying to finally become that team that we think we’re capable of being.”

“Mike Rose, if there’s a better defensive player in college football, I’d like to see it. I think what Greg Eisworth continues to do for this team (is) incredible. — Campbell on two of his best defensive players

The Cyclones improved to 13-2 in October since 2017. The 13 wins are second among Power 5 schools in that span. No. 2 Alabama notched its 14th win in the same time frame Saturday night. … ISU’s 52 points against Kansas are the most in a conference game since hanging 66 on Texas Tech in 2016. … Nwangwu notched his third rushing touchdown of the season (and his career). The speedy senior’s only trip to the end zone prior to this season came via a kick return. He rushed for a career-high 57 yards in Saturday’s win. 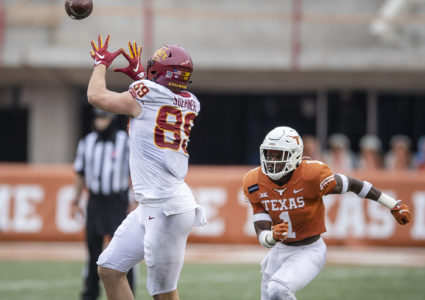 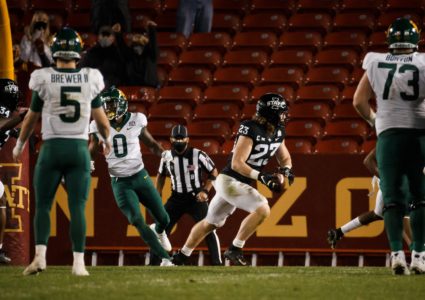