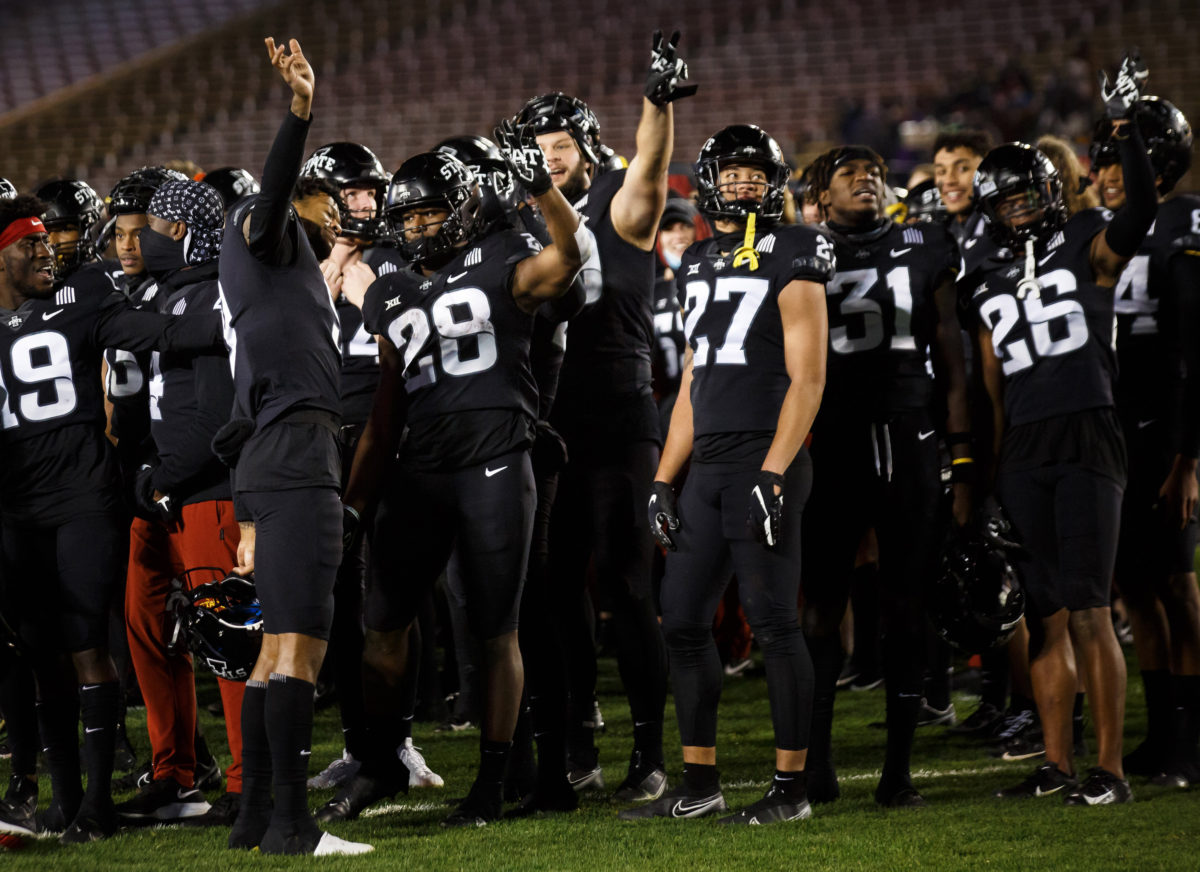 As Iowa State star back Breece Hall breezed by Kansas State defenders Saturday during an utterly dominant 45-0 win at Jack Trice Stadium, a profoundly unpleasant memory bubbled up in my mind.

Because that bit of horrible history offered yet another opportunity for me to reflect on how much has changed for Cyclone football under head coach Matt Campbell — and how his No. 17-ranked and Big 12-leading team remains perilously perched in rarefied air as it stares down Friday’s huge matchup at Texas.

So let me explain why my mind drifted back to Sept. 25, 1999: A balmy day that started sky high emotionally and ended up derailed in a crumpled heap.

Iowa State stood 3-0 at the time. I was an unconventional 30-year-old college student, loving every minute of the first conference game of the season. And at halftime of the upstart Cyclones’ Big 12 opener against No. 15 Kansas State, we cracked cheap beers and partied in the Jack Trice Stadium parking lot as if a corner had been turned.

My friends and I: A bit slack-jawed, buzzed and uproariously jubilant.

K-State coldly, but summarily scored 28 unanswered points to win 35-28. It was like a slow-motion execution. The Cyclones would triumph just one more time that season. The impending breakthrough, it turned out, wouldn’t come for Dan McCarney’s Cyclones until the following nine-win season. And the postgame beers I consumed tasted caustic and bitter instead of merely innocuous and insipid.

Still, man, Iowa State’s methodical beatdown of its longtime bane and coronavirus-depleted nemesis felt better than any buzz even the finest well-aged, single-malt Scotch can produce.

To Campbell, Saturday’s triumph served as just another “step.” To people who’ve been around Iowa State football for decades, like me, it seemed like a milestone.

It shouldn’t have. As usual, coach is right.

“I don’t know if it’s the finished product,” Campbell said of Saturday’s performance. “There are a lot of positives we can take, but we’re still at a point where there’s a lot of areas where we need to grow and continue to work on. Great challenges sit out in front of us and with great challenges come great opportunities. Part of it is going back to work and continuing to perfect your craft. I do think it’s a positive that we played good football today.”

Hall rushed for 135 yards and two touchdowns. He averaged nine yards per carry. Brock Purdy threw for 236 yards and three touchdowns. Mike Rose snared his fourth interception of the season — and the No. 17 Cyclones won for just the fifth time in the last 25 meetings with the Wildcats in a game that was never remotely in doubt.

Xavier Hutchinson eclipsed 100 yards receiving in the first half alone while sprinkling in a sparkling 21-yard touchdown grab.

But one of his plays that stood out the most to me point, again, to how much has changed in the Campbell era — and even within this season.

Iowa State faced a possible three and out on its first drive of the game. Hall had lost two yards on two carries. So it’s 3rd and 12, the Cyclones are behind the chains (again) and K-State is poised to make a statement with its defense.

Purdy and Hutchinson had other plans. ISU’s star quarterback slung it into X’s sweet spot and he glided 20 yards for a first down. It was just the fourth time all season the Cyclones had converted on 3rd and 11 or longer and set the tone for the pummeling to come.

Three plays later, Purdy hit speedster Joe Scates for a 33-yard touchdown and the rout, it turned out, was on.

“I just thought the start of the game in general was positive,” said Campbell,whose team (6-2, 6-1) is an unprecedented 15-4 at home in the past three seasons. “We had a big third down conversion, offensively, that we were able to turn into points. And then for the defense to turn back around an limit a drive where, from a Kansas State standpoint, they were able to move the football down the field. To hold them to zero points there, I thought that was big.”

K-State took nearly six minutes off the clock and surged to a 1st and goal at the Cyclones’ 3-yard line. The Wildcats would gain less than one more yard in four downs after that, though.

Purdy then guided ISU 97 yards in 12 plays and capped the drive with a six-yard touchdown to Charlie Kolar and the rout really was on.

“I thought fundamentally and technically, we were really sound,” Campbell said.

Sometimes how you start foreshadows how you’ll finish.

That wasn’t true when K-State came to Ames in 1999 and went on to rise from the dead and end up with 11 wins — a double-digit feat the Wildcats achieved for six out of seven years in that span.

It’s true of the 2020 Cyclones, where bad memories are fully swapped out for stirring ones — and the past is anything but prologue. It’s something to be swept aside, properly derailed and tossed onto a heap as the next stop — in this case, Austin, Texas on Friday — swings into view.

“It starts with our team bringing everybody together to believe the same message,” Hutchinson said. “Bringing unity within all of us. Also just really taking each game day by day. Just trying to focus on what we can do tomorrow, or what we can do today, to just get better. I think we’ve all bought into that and I think it’s been starting to show.”

GRAY: Everyting has changed — except it hasn’t — as No. 17 ISU prepares for No. 6 Oklahoma State