The following is a letter sent to Cyclone fans by Jamie Pollard on Monday.

On behalf of our student-athletes, coaches, and staff, I want to say “thank you” for helping us have a successful weekend.  The atmosphere in the stadium Saturday night was incredible and the energy created with fans in the stadium was a huge factor in defeating Oklahoma.

I also want to recognize those in attendance for doing an outstanding job in adhering to our mitigation efforts.  Numerous peers around the nation shared how compliant (especially face coverings) our fan base appeared to be.

Several weeks ago, we shared that an important factor for allowing fans at games was our confidence that you would adhere to our mitigation measures. We also asked for your support in creating a safe environment while giving our team an impactful home field advantage. You delivered! We should all take great pride in meeting those goals.

The challenge this week is to sustain our home field advantage Saturday against Texas Tech and doing so responsibly.  As fans we must have the necessary discipline, focus and commitment to continue making personal sacrifices and put the good of the team first. That is the same message Coach Campbell told the team in the locker room.

With Saturday’s forecast sunny with temperatures in the 70’s, we need to continue to demonstrate the same cooperative effort in adhering to mitigation requirements. All fans must continue to commit to no tailgating, social distancing, and most importantly, properly wearing face coverings even though it may be warm.

Lastly, I wanted to update our expectations for fans attending other Iowa State sports.

Volleyball – We played our first home matches last weekend in Hilton Coliseum. Attendance was limited to family and friends of our players and coaches. After reviewing match operations, we have decided to allow a limited number of fans at future volleyball games beginning on Oct. 23 vs. Baylor. Please see the following link {desktop | mobile} for more information on mitigation strategies for those matches.

Soccer – The soccer team has played two home matches and attendance was limited to family and friends of our players and the Iowa State pep band. Given the seating capacity at the soccer complex, we are keeping the crowd as families/friends for the remainder of the season.

Men’s and Women’s Basketball – Our staff is still working with the Big 12 to finalize men’s and women’s basketball schedules. We will not sell season tickets this year for either basketball program. However, we are considering options that may allow a limited number of fans at basketball games this season. If we do allow fans to attend the games, capacity will likely be around 10% (Hilton’s capacity for basketball is 14,384) and tickets would be available to individuals who have maintained their Cyclone Club donations during the pandemic. We anticipate having more information in early November.

Wrestling and Gymnastics – Similar to basketball, we are finalizing schedules for wrestling and gymnastics.  We do not anticipate selling season tickets for those sports but may host a limited number of fans similar to volleyball.

Thanks again for your continued support during these challenging times. We are blessed to have such loyal and generous fans. 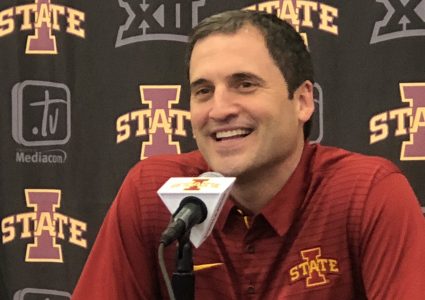