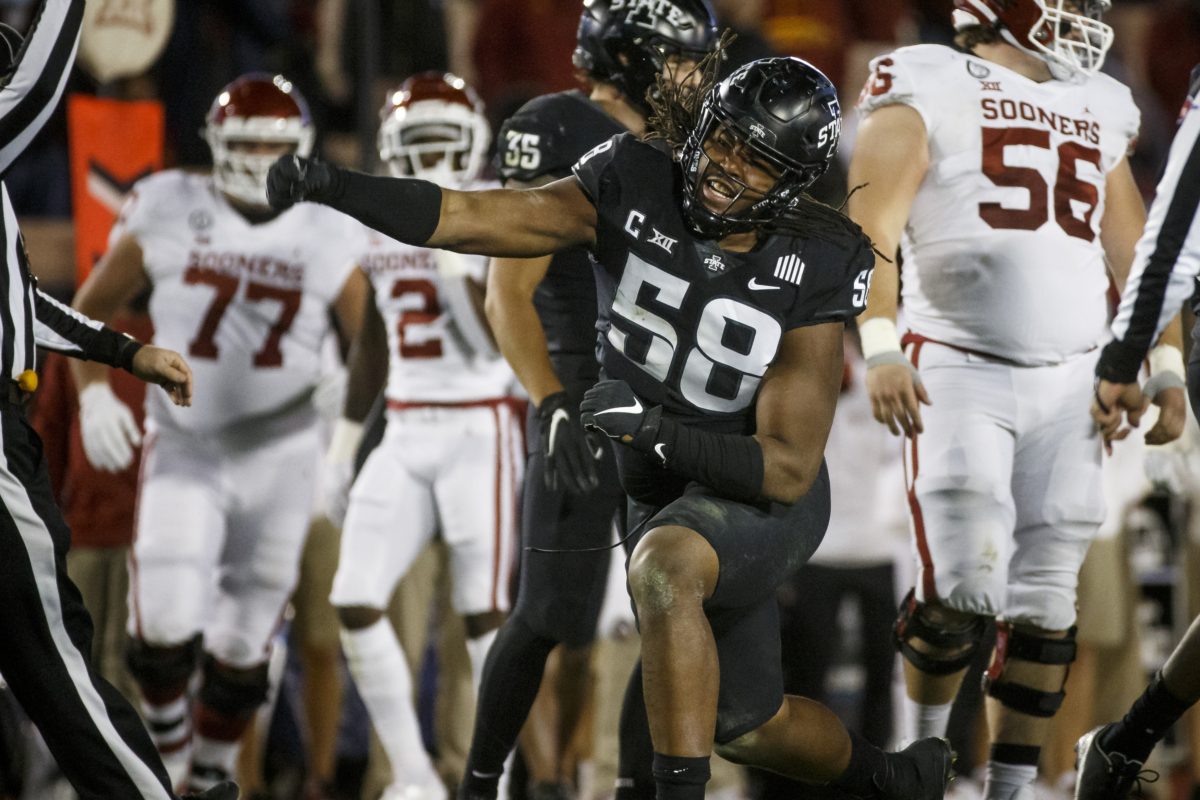 It was during Iowa State’s 37-34 win over TCU that I first noticed it.

How many freaking captains does Iowa State have this season? Seemingly every player (a slight exaggeration) they showed during the broadcast had a “C” patch on their right shoulder. More players had them than I had ever seen, at least at Iowa State.

The question came up again in my Twitter feed on Saturday as some people across the country probably watched the Cyclones for the first time this season during the nationally televised network broadcast.

So, on Tuesday, I asked Matt Campbell how many captains this year’s edition of the Cyclones have and how were they chosen? The answer was more straight-forward than I expected.

“Great thing is I made it easy on our team and I picked the captains this year,” Campbell said. “Really, for me, it was easy and it revolves our 16 seniors and then we had four juniors in terms of Brock Purdy, O’Rien Vance, Mike Rose and… Anthony Johnson’s the fourth junior that really stood up into some leadership roles this offseason for us. I really felt it would be a mistake to announce anybody or single anybody out when these 20 guys’ leadership was pivotal to us sticking together, holding together, unifying through what would be the most unique circumstances that I think any sporting team has faced. I just didn’t think it was fair to go any route other than that. I think it’s been really positive and really appreciate the leadership of that group.”

Campbell has largely credited the program’s rise, and early success in 2020, to this same group of players. That group of 16 seniors, made up primarily of players from the 2016 recruiting class, signed with the program when Campbell’s vision for the future of Iowa State was simply that — a vision.

The 2016 class, Campbell’s first, features holdovers such as Sean Foster, Chase Allen, JaQuan and Josh Bailey, Enyi Uwazurike, Kene Nwangwu, Lawrence White, Dylan Soehner and Arnold Azunna. That group signed with Campbell’s staff before they had even coached a game at Iowa State.

Then most of them sat on the sidelines as redshirts watching the team fight its way through a 3-9 season.

This year’s senior class grew as punters Joe Rivera and Corey Dunn, wide receiver Landen Akers, kicker Connor Assalley and do-it-all safety Greg Eisworth joined in the program as walk-ons — or JUCO transfers in the case of Eisworth and Dunn and through the gray shirt process in the case of Akers. Kicker Alex Probert joined the team this summer as a graduate transfer from Liberty.

Two of the captains come from the 2017 recruiting class in Vance, who redshirted his initial season, and one-time special teams standout turned starting senior linebacker Jake Hummel, the only four-year senior on the Cyclones’ roster this season.

Rose, Purdy and Johnson joined the program in 2018 but instantly made their marks on the program during breakout freshman campaigns.

Campbell’s approach to selecting the captains in 2020 could be considered unorthodox, but it had a purpose — highlighting the pillars of a program hell-bent on pushing away from its historic lowliness.

In the process, the Cyclones’ head coach opened the door for more players to take ownership of the process. It gave more players an opportunity to lead and put a C on their chest, which demands respect.

In a year that has been anything but normal, why not go outside the box one more time?

“I think it more extended the leadership role into everyone’s hands in the class. In the past it’s more if you weren’t a captain then maybe you felt like you didn’t have as much power as if you were a captain,” Hummel said. “But, now, that he put us in that situation it allowed us to remember that everyone in that class and in those leadership roles, we have just as much impact as the others. We can each say what we think to the team and what we say matters. I think that’s pretty cool. It’s a great opportunity from Campbell I think.”

*** Oklahoma quarterback Spencer Rattler’s postgame comments on Saturday and noting of what he perceived to be defensive pass interference on the Sooners’ final offensive play, an Ihsheem Young interception that sealed the Cyclones’ win, made it back to the Iowa State players — or at least they made it to Charlie Kolar.

“I saw the quotes about the last call. I thought it was interesting. Obviously, I saw the play. There was a little bit of contact, but I didn’t think it was a call. Last year when we lost the game, I don’t think we were complaining about the refs, because, the thing is, the refs can make calls both ways. There’s definitely calls both ways. Early in the game, they called me downfield on a pass because they confused Dylan (Soehner) and I’s numbers. There’s mistakes both ways and they owned up to it. I think the refs have calls go both ways, but I think, at the end of the day, you can’t complain about the outcome of the game based on the ref.”

*** Xavier Hutchinson scored his first touchdown as a Cyclone in the win over the Sooners. How did it feel and what did he see on one of the game’s most crucial plays?

“It felt really good to get into the end zone for the first time. Even though it wasn’t a full stadium, it felt like a full stadium. It was just a really great experience. On the play, when you have a running back like Breece (Hall), people are going to stack the box and it’s going to give receivers one on one opportunities. On that play, I just saw the safety come down and I kind of knew it was going to come to me then Brock just does Brock and he throws the ball in the perfect spot where the corner can’t play it. From there, I just kind of took over.”

“Obviously, it was a good team win, but, personally, that was a little extra special for me. I grew up just a couple minutes from the stadium. I grew up a die-hard OU fan. We’ve come close to beating them, but when I’ve been playing we haven’t beaten them. That was extra special, especially because, you know, I have a ton of respect for that coaching staff and the whole program, but I took offense when I didn’t get an offer. I know Coach Stoops and Coach Riley and they’re both awesome guys, but, personally, as a competitor, I grew up an OU fan. That was my goal. When I didn’t get that, it was frustrating. Truth it, I couldn’t be happier where I ended up. I love it here. I have all the respect in the world for OU and their coaching staff, but I absolutely love it here. For me, personally, that was a big… should’ve done it last year, could’ve done it last year, but it was a great win.”