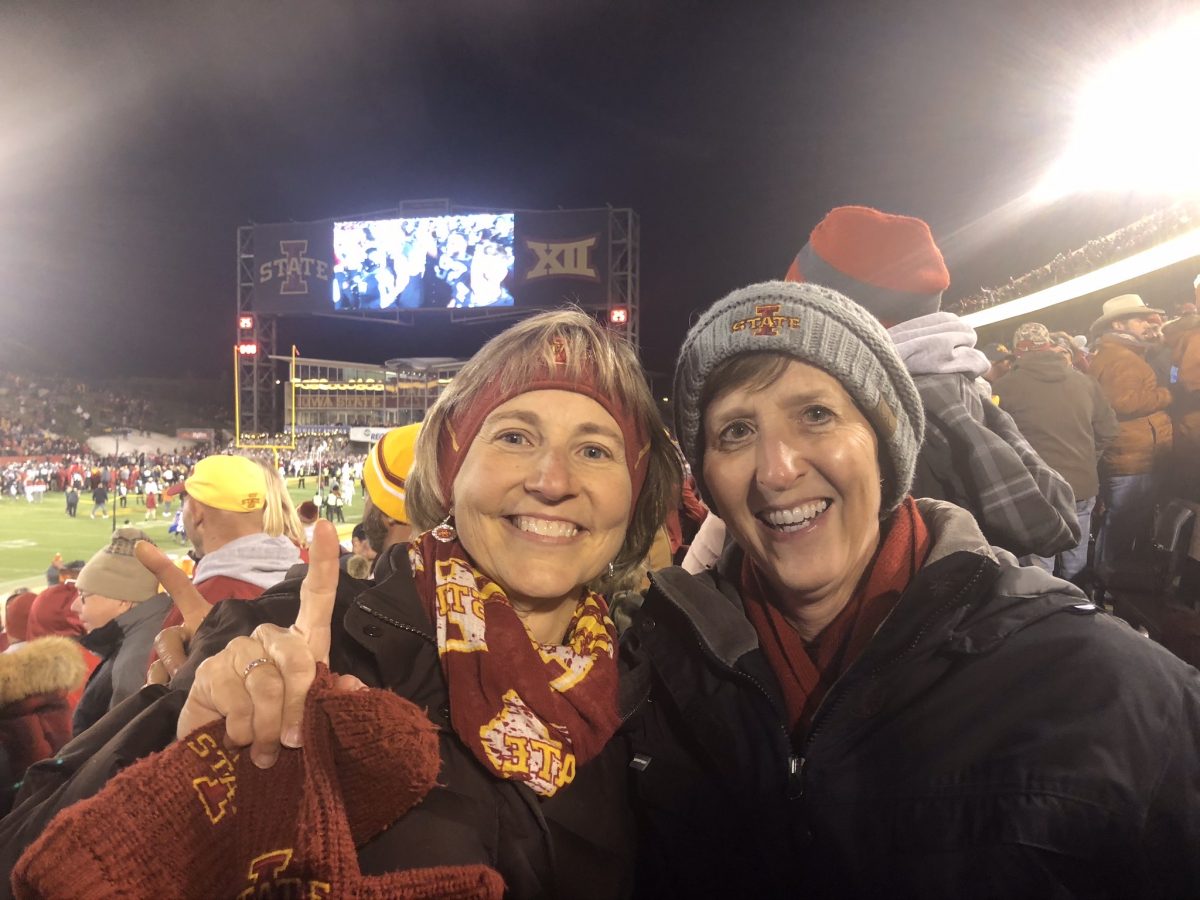 Brent Blum described Elaine Gifford to me as “maybe the largest Cyclone fan” he’s ever met. Now, remember, Brent has met thousands of Cyclone fans over the years through his work at Cyclone Fanatic, his years as a broadcaster and now in his role as an Iowa State employee. So when he described Elaine this way, I expected to talk to someone whose fervor for Iowa State is unparalleled.

And I was right—well, mostly, anyway. While Brent certainly wasn’t exaggerating about Elaine’s enthusiasm for the Cyclones, there is one other person whose passion rivals hers. That’s the passion of her best friend, Sheila Madsen.

Together, they’re a perfect intersection of Cyclone Power and Girl Power. As Sheila put it, they are “women that know the game” and they are as loyal as they come. Want proof? The pair hasn’t left a single football, men’s basketball or women’s basketball game early since they started attending games together in 2011.

“We’ve never left a game early—ever,” Sheila said. “Then we race back to the car to turn on the postgame radio show.”

Elaine and Sheila discovered their shared passion of the Cyclones when their daughters were in elementary school nearly 20 years ago.

“We volunteered a lot together through our parent-teacher organization and we would just talk a lot about Iowa State,” Elaine said.

“But with kids,” Sheila continued, “you’re all in and get to Ames as much as you can, but then they get busy and you don’t have any more Saturdays. So we had a break in there for quite a few years from our season tickets.”

For those years, Elaine and Sheila were what they described as diehard “television fans.”

“We’re all in and we’ve always been that way,” Elaine told me. “We care. We really care. We don’t take it lightly. We’re not fair-weather fans. So even when I didn’t go to games, I definitely planned my week around the television schedule.”

This devotion to the Cyclones is due, at least in part, to the fact that both Elaine and Sheila are Iowa State graduates, as are Elaine’s sister and Sheila’s husband. And it didn’t take long for Elaine to recruit her husband to the cardinal and gold too.

“I converted my husband,” Elaine said. “He is an honorary member of the Alumni Association now. He went to the University of Colorado, but he grew up in West Des Moines, so it wasn’t hard for me to switch him over.”

Once their daughters were born, both Elaine and Sheila hoped their allegiance to the Cyclones would become a family tradition.

As Sheila put it, “I think along the way going to games and tailgating I just thought, ‘That’s my perfect world—to have my kids go to Iowa State and be Cyclones and be together on football weekends.’”

The dream came true. Sheila’s daughters Kelly and Janelle graduated from Iowa State in 2014 and 2018, and Elaine’s daughters Audrey and Kelly graduated in 2012 and 2015.

Their daughters’ attendance at Iowa State was the catalyst that led Elaine and Sheila back to Jack Trice Stadium and Hilton Coliseum after years of watching from home.

“My younger daughter, Kelly, was on the cheer team during her freshman year at Iowa State in 2011 and 2012,” Elaine said. “So we went from being television fans just because of our schedules to having season tickets in football and men’s and women’s basketball—partly to follow Kelly and partly because we love sports and we had an opportunity as empty nesters to make as many trips to Ames as we could.”

In the years since 2011, Elaine and Sheila have become extra passionate about women’s basketball. They now share five season tickets and as Sheila explained, Elaine is always trying to get “butts in the seats.”

“Women’s basketball is a different thing now than the men,” Elaine said. “The men come and go so quickly, but you just get so attached to these women. We sit pretty close to the court and we just feel like they’re our family.”

In fact, Elaine and Sheila made themselves part of the women’s basketball family during the Big 12 Women’s Basketball Tournament in Oklahoma City.

“In the beginning of the 2018 season, I said to Elaine, ‘We need to go to Oklahoma City for the tournament.’ Well, we went down there and had an amazing time. We went to all the pep rallies and pretty soon we were talking to Meredith’s (Burkhall) parents, Madi’s (Wise) parents and Alexa’s (Middleton) parents.”

“We have no shame,” Elaine said. “We’ll just strike up a conversation.”

“We went to dinner after the Texas win down there and Coach Fennelly and his family walked in,” Sheila continued. “And he just made a little lap around the restaurant and we flagged him down. He came over to our table and gave us a hug. Other people might have thought that was really weird but we’re just all about that stuff.”

Though they loved their experience OKC, both Elaine and Sheila agreed that it was the women’s victory over No. 1 Baylor in March that tops their list of favorite Cyclone memories.

“It was one we will never forget,” Elaine said. “It was stressful for sure but so worth it when Ashley (Joens) made that free throw and dared to crack a smile. We all cried a few tears of joy and hugged and high-fived each other and our neighbors—things we miss doing now.”

Like the rest of us, Elaine and Sheila wonder whether there will be any hugging or high-fiving in the stands at Jack Trice this fall. But it should come as no surprise that they renewed their season tickets as a sign of support, even if they end up not being able to be in attendance.

“I think it would be so heartbreaking if those kids couldn’t play,” Sheila said. “It would just be devastating for so many reasons, but especially in those kids’ hearts and minds. So if we have to not be in the seats to make it so they can have a season, that’s a sacrifice I’ll make.”

The reality is that there are very few sacrifices this pair wouldn’t make for the Cyclones. But as deep as their loyalty is to Iowa State, their loyalty to each other is even deeper.

“I would be lost without Sheila,” Elaine told me. “My life would be so much worse. My mom died last year and we’ve just been through so much together. You cannot replicate my friendship with Sheila. We wouldn’t have the same friendship if we didn’t have such similar interests. It’s just the most awesome thing ever. I’m just blessed to have her and to be a Cyclone with her. She gets it.”

“Elaine’s passion for the Cyclones—that’s Elaine in everything,” Sheila said. “She carries so much passion and just lifts you up. Our friendship runs way deeper and way broader than the Cyclones, but the Cyclones are the cherry on top because we don’t have that with anyone else. The level of passion we have—it’s just such a cool thing to be able to share with somebody.”

Like I said, the perfect intersection of Cyclone Power and Girl Power. 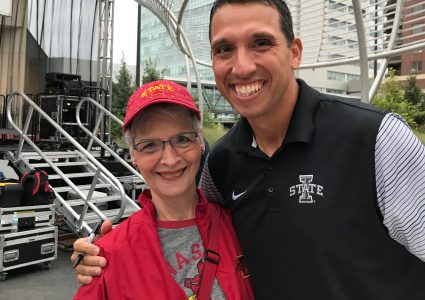 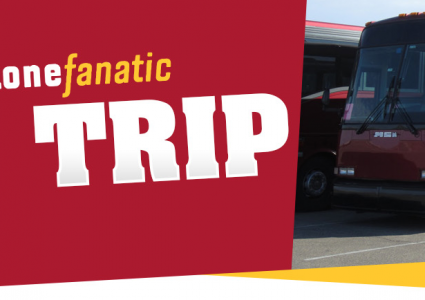 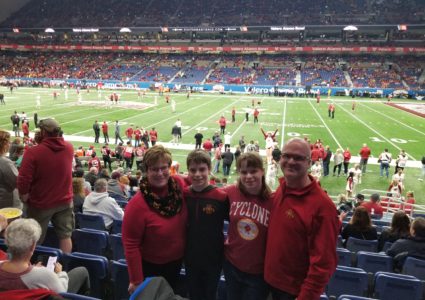