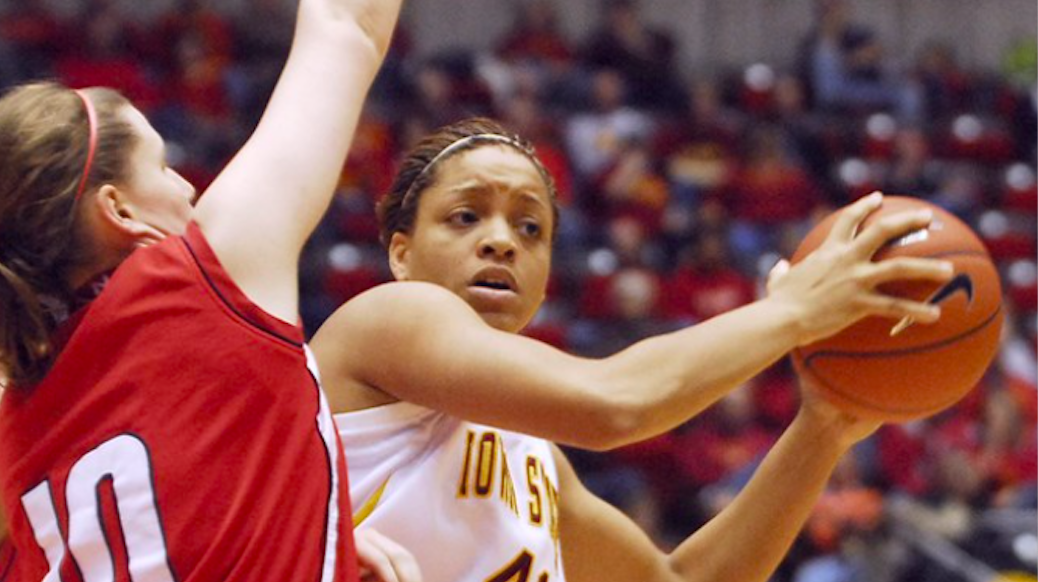 But to even get a shot at a meaningful professional career, Ross had to overcome adversity in the form of ligament tears in both knees.

Ross, a Kirkwood Community College transfer, joined the Cyclones as a junior during the 2006-07 campaign and had an immediate impact.  A starter for most of the season, Ross led the team in rebounding at 7.3 rebounds a game and was Iowa State’s third-leading scorer with 10.7 points a game.

After a loss in the second round of the NCAA tournament ended her junior year, Ross entered her senior season with high expectations.  But then, on December 21, 2007, Ross suffered a season-ending ACL tear in her right knee.

Through Ross was granted a medical redshirt, there was more adversity to come.  She had to undergo a second scope on the knee just before the start of the 2008-09 season.  Ross was eventually cleared to play and saw time in 33 games, but her minutes and contributions were limited in the Cyclones’ historic run to the Elite Eight.

“There was a little disappointment in not being able to play as many minutes and contribute as much as I wanted to, but I wouldn’t take it back,” Ross said.  “I got to experience history for a program that I’m always going to be connected with.”

For most players who averaged just two points and less than two rebounds a game during their senior season, that would be the end of the story.  But not for Ross.

Instead, Ross found an agent who connected her with a professional team in Puerto Rico.  Like her junior season as a Cyclone, Ross was an instant contributor. But much like her career at Iowa State, another knee injury nearly derailed those aspirations.

During the playoffs, Ross suffered a second season-ending injury, this time to her left knee.

“I ended up being player of the year and was averaging about 37 points.  And then boom, left knee—gone.  It was the ACL, MCL, meniscus.  It was worse than what I did in undergrad,” Ross said.

Again, though, Ross used the injury as an opportunity.  After having her knee surgically repaired in the off-season, Ross joined a team in Australia.

“I took the sacrifice of less money for a team that would allow me the experience to get my knee stronger,” Ross said.  “That was the catalyst for me to shift my career.  If I wanted to play at a high level, I had to find a way to get healthy.”

She found a way.  Since that winter season in Australia, Ross has played in Puerto Rico, Ecuador, Colombia, Taiwan, Finland, Romania, Israel, Switzerland, and France.  For Ross, her experience in Israel proved to be the most rewarding.

“In Israel, you are playing directly with WNBA players.  For someone who wants to play at the highest level, and having that mentorship of playing against some of the best players in the world, that experience really shifted my career.  It helped me focus on the type of athlete I wanted to be.  And the country itself is just beautiful.  The Middle East, when you get there and experience the culture and see it firsthand, it cuts against all the misconceptions you have,” Ross said.

“Most teams get three imports, so they usually do one to two WNBA players and then fill the third spot with another top-caliber player.  So on my team, I had Courtney Clements, who played for the Chicago Sky at the time, and then Asia Taylor, so I had the mentorship of playing alongside them.  Tiffany Jackson, who played at Texas, was in the league.  That was really awesome because I played against her in undergrad, so to be able to play against her at the professional level was really great.”

Though Ross’ aspirations of getting picked up by the WNBA after her impressive first season in Puerto Rico were disrupted by her left knee injury, she has no regrets about the course of her professional career.

“Players get so caught up wanting to play for the WNBA and think they don’t want to play anywhere if they can’t reach the pinnacle,” Ross said. “But there are so many beautiful opportunities abroad, and the longevity.  At the end of the day, we’re playing with those WNBA players in Europe anyway.  I just got in my head that I’m going to compete at the highest level I can for as long as I can.  And if that means the WNBA, great.  But if not, who cares because I’m doing what I love.”

Ross plans to continue competing until her body says otherwise.

“I thought about (retirement) this past year.  I swapped teams this year, but I ended up having a really good season, so I thought, ‘You know what?  My body feels good.  I’m going to see what happens,’” Ross said.  “I played in France and left my team at Christmas and moved to Switzerland before the COVID-19 stuff happened and cut the season short.”

COVID-19 is also making it difficult for Ross to plan for next season.

“The season usually opens up around late-August, early September, so teams are starting to sign right now, but it’s so unpredictable right now.  I’m thinking this might be my last season, but we’ll see what happens.  If someone wants me after this year and my body feels up to it, great, but I’m thinking this is my last one,” Ross said.

“I feel good.  I averaged 24 points this year.  I feel really good.  I have had four knee surgeries.  In the basketball world, that catches up you.   I’m listening to my body.  I’m trusting my body.  I’m not making any rash decisions, but at the end of the day I’m 34 and I’ve lived a very long life in terms of the basketball world.  I know it could stop at any moment.  Once it’s done it’s done, and I want to end on my own terms.”

Whether Ross’ professional career ends tomorrow or after another several seasons, she’s prepared.  While abroad, Ross earned a second bachelor’s degree from Iowa State in gender studies and a master of education from the University of Wisconsin-Milwaukee in ethnic, cultural minority, gender and group studies.  She’s since been using those degrees and her experience to help other athletes tell their stories.

“Over the last few years I’ve been helping other people document their stories and legacies and helping them write books,” Ross said.  “What I’ve noticed is there’s so many amazing athletes who I encounter every day who have these courageous stories and experiences in them, so I’m currently working on starting a publishing platform for athletes to share their stories with the world.  It’s going to very niche and strategic as far as who my target audience is.  So I’m at the start of starting my own company.”

Ross also wants to tell her own story.  Ross is currently in the process of writing her first book, which will loosely chronicle her life.

Growing up, Ross moved frequently from city to city and family to family.  “I don’t think I stayed in one place for more than a year when I was younger.  I had to carry home where my heart was.  I didn’t need stuff.  I just needed good people and love, and you can find that wherever you can go.  You don’t need to be attached to things,” Ross said.

“What I’ve been really lucky and grateful to do is not only be an athlete and play this game for so long, but I also have a really big story to tell about what led me to become this athlete.  So I’m going to dive a little bit into my life and what helped my purpose reveal itself.  It’s not the prettiest experience, but I think it’s an experience that a lot of athletes will resonate with,” Ross said.  “I hope my story will inspire someone else to push forward with their dream.  That dream may not be sports, but there is always light at the end of the tunnel and I just want to be able to share my story about how I got there.”

Now, as Ross nears the end of her professional career, she’s thankful for her journey—adversity included.

“Who would have thought that a kid who played just a few minutes her senior year would still be playing professionally?  I’m super grateful.”

Seanna Johnson is still looking for a professional home