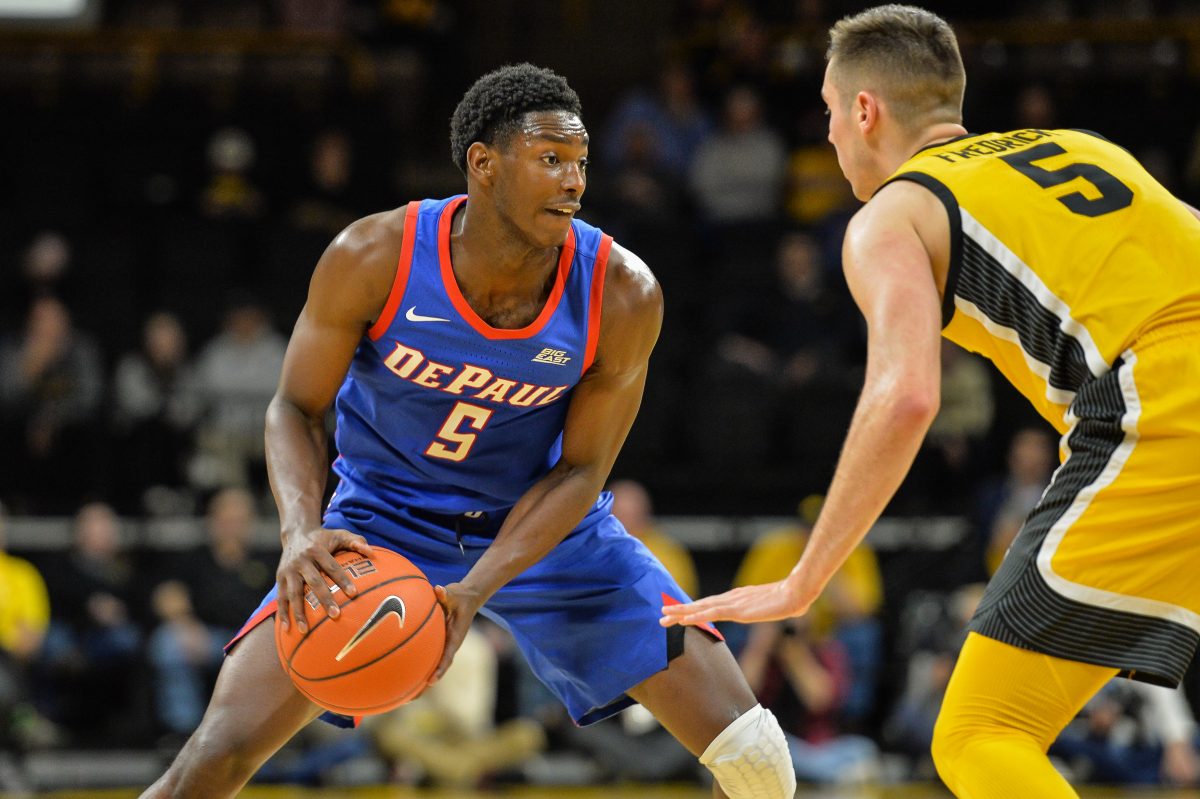 Saturday evening, I got a chance to catch up with new Iowa State commit — DePaul graduate transfer Jalen Coleman-Lands. You can view our full conversation about why he picked Iowa State, how the coaching staff sees him fitting into the program and more below in Q&A format.

Stanz: So why Iowa State?

Coleman-Lands: “Honestly, it hit all my objectives in a school. I was looking for a credible, trustworthy staff being in school for a decent amount of time and going to some solid programs with solid staffs, I was able to ask around and get some feedback from other coaches that have coached me along the way and even friends and players. I heard good things from people about the staff from people who know my game and the type of player and person I am. I heard good things with that as well. But, the coaching and the objectives like they had my data analytics program, the (management information systems program) that fit.”

“It fit as far as playing style. Then playing against some of their opposing teams that they play pretty consistently with people in their conference (or play annually) like Texas Tech and Iowa. They ended up seeing me when they were scouting on film and things like that. Based off of their system, the fit and being in Ames, being a place where it’s really close knit and family-oriented environment where everybody in Ames supports Iowa State. Coming from a boarding school in the middle of nowhere, not in the middle of nowhere, but in a rural area, I can relate to what it’s going to be like and coming from a family-oriented program like La Lumiere. It kind of prepped me for going into situations like Ames and Iowa State. That allows me to focus on the things that I want to focus on and the environment and the people around me.”

Stanz: How have the coaches told you they see you fitting in?

Coleman-Lands: “Honestly, they’ve got a lot of people coming back, so in addition with me, being someone who can score the ball and do it at a high-level. Being able to be someone who has leadership qualities and is an older guy and is selfless and a great teammate and knows the importance of that and really raise the level of intensity every day in practice, which will ultimately show results in a game. So, just to make the team better, honestly. Hopefully, they’ll do the same. It’s a mutual benefit.”

Stanz: Have you had an opportunity to talk to any of the other guys on the roster?

Coleman-Lands: I’ve texted with (Rasir Bolton) a little bit, but I haven’t been able to hit him up too much just not knowing and just trying to get feedback. I’ve talked to Prentiss (Nixon). I’m good friends with him as well. He’s no longer there, but I got insight on his feel and an idea on coaching and things like that. I talked to a couple of the older guys as well. It’s been great getting feedback from them, but I haven’t really had the opportunity to talk to too many of the returning players.”

Stanz: How would you describe yourself as a player?

Coleman-Lands: “Somebody who can make shots and cares about winning. Somebody who is willing to be selfless and is a great teammate and willing to do all the little things from taking charges to talking on offense and defense to even having the capability and the work ethic to where coach trusts me to take the last shots. I feel like I’m willing to do whatever the team needs to win. I carry that mindset over into the games whether that be offensively or defensively.”

Stanz: Is it relieving to have this process over with?

Coleman-Lands: “Man, yes, man. It’s easier being that I was kind of familiar with the process, but it still doesn’t make it less stressful. It’s still kind of like this will be a decision that will determine the next few years of your life. It’s my last go around so making sure I ask all the questions plus with it being this unprecedented time. I can’t go on a visit. I’ve got to ask as many questions as possible to give me the best feel possible.”

Stanz: How much more difficult was it with everything going on compared to when you transferred from Illinois to DePaul?

Coleman-Lands: “I mean, it makes it more difficult in a sense where physically you can’t get a feel for it as much. But, with technology nowadays, you can Zoom call and get a feel for the people, which is most important. The people make the environment. Then you can kind of do your research and get a feel with images and videos of facilities and stuff like that. At the end of the day, I feel like Iowa State and the staff, they did a great job of utilizing all forms of resources to make the decision as easy as possible.”

Stanz: This is my last thing and it actually just came to my mind, I know Iowa State and DePaul are scheduled to play each other this year. What will it be like to play your former team?

Coleman-Lands: “It won’t be weird. At the end of the day, basketball is basketball. Those are still like my brothers. At the end of the day, it’s all love, but I’m going to have a chip just like they’re going to have a chip. That’s with every game, but especially for that game, I know it is going to be an opportunity to show my development and all the work that I’m putting in now until that game. Really, every game I’m taking like that game, but I’m definitely going to have that game marked down, as I’m pretty sure they will, as well. It’s not awkward. It’s just going to be something that’s on the schedule. We both know it’s on there. It’s their choice to prep just like it’s my choice to prep with what we do in the meantime. It’s just ball. It’s ball and it’s all love. It’s for the best and the betterment of the game and for us.”