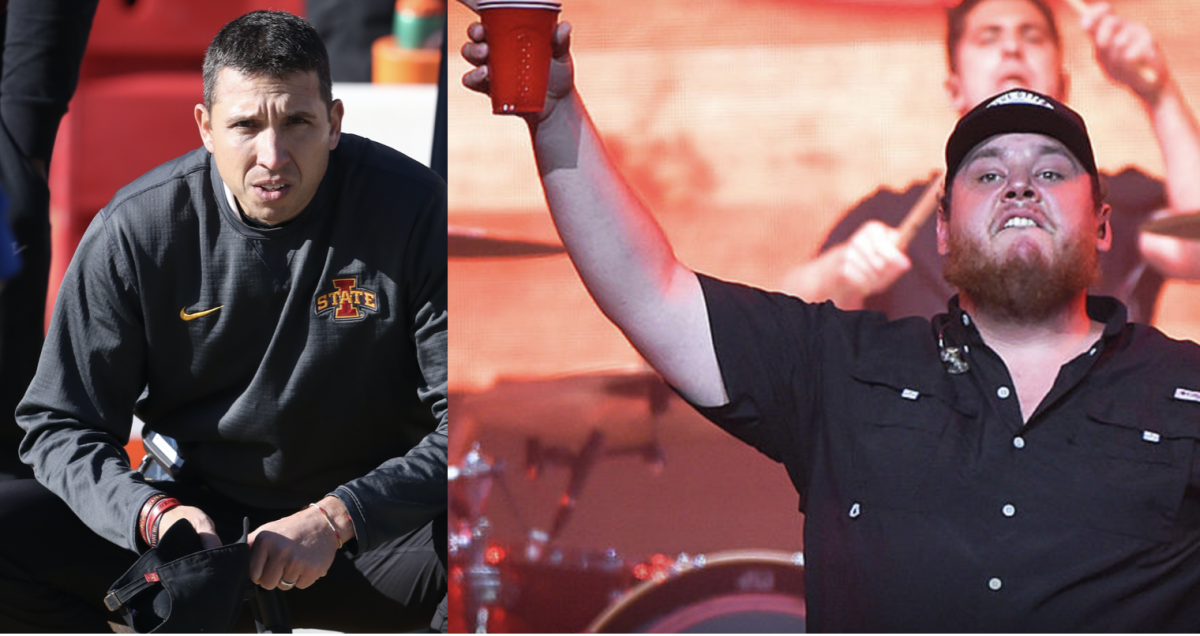 We have reached the point of the nationwide shutdown where we are all staring at walls, drinking a lot of bourbon and going stir-crazy. I am. Don’t judge.

Simply raise your hand if you can relate.

Here’s what I’ve been up to since the world shut down.

I’ve been trying like hell to entertain you guys during a tough time.

I’ve been reading A LOT. Trying to make myself better when I have time to think.

I watched the Tiger King. I’m now studying World War I (crazy stuff) and plan to heavily get into meat smoking.

Basketball recruiting will ramp up later this week, so we have that to look forward to.

But I want to have fun with you guys. Make you laugh. Make you think. And that’s what I am going to start doing more of on here.

After a few cold beers, this is where my mind goes: What if Big 12 football coaches were country artists?

I have thought long and hard about this, for years really. Two of my greatest passions colliding in one ridiculous column.

Before I begin, it needs to be pointed out that there is no George Strait on this list.

To be considered to be “The King,” you have to have a combination of experience and success that is unrivaled to anyone else in your profession. Gary Patterson has the experience but not the top-end success. Lincoln Riley has had the most top-end success, but not enough to compete with 60 No. 1 hits and 50 years of dominating jukeboxes across this great country.

So here we go. Please respect my decisions and please, respond on the Cyclone Fanatic forums or Twitter with your feedback. Let’s have some fun.

Why: Like Combs, a relative newcomer to the country music industry, Campbell leads his program with an old school feel. Combs is a Ronnie Dunn disciple. Take one look at the guy and you know you’re about to experience something authentic. He isn’t trying to impress suits in Nashville or corporate America. Combs just sings great tunes that come straight from the soul – a rarity in this day and age.

I respect the hell out of it.

Why would Matt Campbell stay in Ames, you ask? Because like Combs, Campbell’s priorities seem to differ from many in his profession. He’s about program building, culture and leadership. He could have taken Florida State, guys. Florida-freaking-State. But chose to remain in Ames, freaking, Iowa.

Both relative newcomers are still not afraid to mix things up with progressive thinking either. Hell, Campbell singlehandedly made black a school color in Ames and some folks are still mad about it.

First of all, both men have a history with mullets.

Career-wise, both Gundy and Shelton did their best work in the first half of their careers. It’s been more than 10 years since the Cowboys have been in the national championship picture.

Shelton might be more famous now, but his music has drastically fallen off since becoming a prominent member of NBC’s “The Voice” in 2011.

I won’t go as far to call Shelton “douche country” because he made some amazing tunes back in the day. But he’s lost about five steps musically.

Has Gundy lost a step, or has college football caught up to him? Gundy’s exotic (not Joe) offensive schemes aren’t that exotic in today’s game. He’s a solid, 8-4 coach right now but still — and this is important to keep in mind, does it in Stillwater, Okla. — not exactly a football hotbed.

I’ve got mad respect for Gundy and pray that he and his counterpart, Blake Shelton, will re-find their way back to the top in some way, shape or form.

Did you know: That back in the day, Luke Bryan actually cranked out some very solid country hits. I was a huge fan of his back in 2008ish.

Then he started wearing skinny jeans and constantly thrusting his hips.

Oh, my dear friend Tom Herman. I hate to do this to you. I really do.

Tom was a hell of a coordinator out of Rice when he joined Paul Rhoads’ staff in 2009. Losing Herman, in my opinion, was one of the great downfalls of the Rhoads era. All you have to do is look at Iowa State’s offensive numbers after this occurred.

Tom went onto Ohio State and kicked ass. He kicked more ass in Houston and smartly held off on taking a handful of decent coaching jobs that were immediately offered to him. Tom held out for the big one, his dream job, Texas.

He hasn’t lived up to the billing yet in Austin. I have faith he will turn that ship around, but this pairing is more about how a person chooses to carry himself than anything.

I know the real Tom Herman, and I wish that college football fans could see that guy too. I hope that someday, they will.

Best Luke Bryan Song: Do I

The thing about both of these guys is that they both had a ton of success at “lower” levels of their perspective industries before catching on with the mainstream. Klieman led FCS power North Dakota State to four championships in five years as the head coach in Fargo. In his first season at K-State, the Wildcats improved steadily throughout the season and surprised many by going to a bowl game.

Stapleton, one of Nashville’s elite songwriters, bounced around the independent scene for a decade before “making it” on the radio in 2014. One could argue that his catalog pre-radio is better than what most casual country music fans have experienced.

As Stapleton often still wears a feather in his cowboy hat, I don’t see much of a scenario on the horizon where Klieman will get too far “out there” in Manhattan.

These are both successful, old school guys who are testing out their potential longevity in the “big time.”

Mainly because like ole Hank, Patterson has gotten awfully cranky during the latter stage of his career. Patterson’s knowledge of the game and greatness on the defensive side of the football is undoubtable. But rude, one word answers in press conferences and a constantly rising temper has grown on me over the years. Patterson comes off as a bit crotchety these days.

The legend, Hank Jr., will still crank out a hit from time-to-time, but there is little doubt that his best years are behind him. I fear that is the case with Patterson too, who reminds me a lot of Les Miles during his stubborn, final years at LSU.

It is way too early in either’s career to know what will come out of it.

Like Elderedge, Wells is a principled man who will be very consistent with his approach to the game of football. Personally and football concept-wise, Wells is a much more balanced individual compared to what we are used to seeing in Lubbock.

Eldredge, a throwback elite voice man, has had a few hits but has yet to prove himself as a big ticket performer.

A few winning seasons at Utah State are nice, but does Wells have what it takes to win in the Big 12?

My early guess is that both of these gentlemen will be elite mid-card performers but I enjoy both and wish them nothing but the best.

Believe it or not, at one point, the great Brad Paisley was one of the top-selling country music artists in America, selling out arenas from coast-to-coast, hosting award shows and melting the hearts of women of all ages. Paisley, one of my all-time favorite country acts, won Entertainer of the Year in 2010 and it has all been downhill since.

Kind of like Miles, who won a national title with LSU in 2007. He’s been very relevant since then, winning National Coach of the Year in 2011, but the last decade has mainly been tales about his stubbornness of adapting to the game in this era.

Now he’s at Kansas and like Paisley, once a titan of his industry, Miles is mostly irrelevant.

Personality wise, these guys are both characters who mirror one another in that aspect as well.

Is a comeback in store for either or these guys? I’m doubtful.

Both are young guys with flashy auras that surround them.

Brown’s air raid offense is comparable to the rock (ish) style that Rice brings to his brand of country music. Brown had a successful four-year stint at Troy, where he went 35-16 as a young head coach between 2015-2018. Like Rice, his future is bright in this industry, but how mainstream can he get in the mountains of West Virginia?

This is a big statement from me. Eric Church is probably my all-time favorite artist in any genre, and that’s who I am pairing beside Riley, mainly because of the longevity that I see in his career. If Riley stays at Oklahoma for a long time, he is going to win a handful of conference titles and be a perennial national title contender. But I could also see him moving on and being a smash in the NFL.

Church is the same way. Rooted in country music, he’s dabbled in rock, the blues, and even alternative forms over music in recent years. His legion of passionate fans (almost cult-like) will always follow and support him along the way.

Church has yet to sell out to country radio. I don’t see that ever happening, so he will never be a mainstream darling like say, Luke Bryan. However, he is always going to be relevant and wildly popular. Because of that, Lincoln Riley is an appropriate coach to pair “Chief” with.

Best Eric Church song: Love Your Love The Most & Before She Does (tie) 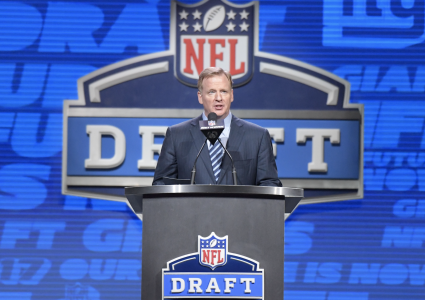 WILLIAMS BLOG: On Thursday night at least, stars did matter 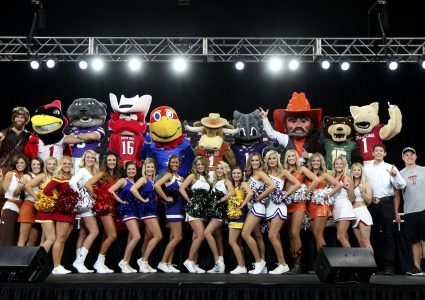