The Cyclones are set to compete at the Big 12 Championship March 7-8 at the Bok Center in Tulsa, Okla.

“I told our guys everybody is 0-0. That’s exciting. It’s a fresh slate,” head coach Kevin Dresser said. “Our guys are excited. We get to compete for a Big 12 Championship on Saturday and Sunday. Then, more importantly, we get a pecking order for Minneapolis. The month of March is crazy exciting to be a college wrestler.”

There will be a total of 54 automatic bids to the NCAA Championships up for grabs this upcoming weekend.

The breakdown of automatic bids for each weight looks like this:

In the Big 12 Pre-Seeds this is how the Cyclones ranked:

What this all means for the Cyclones is that the only guys who will have to work a little harder to earn their ticket to nationals are Chase Straw at 165 pounds, who was seeded two spots shy of the qualifying mark, and Joel Shapiro at 197 pounds, who was unseeded in the preseeds.

For the rest of the Cyclones, if they just show up and wrestle at the level they were seeded, it should be no issue earning their bids.

The Cyclones have had a bumpy season with tough losses to two top-5 opponents and some injuries to their starting line-up but regardless the cardinal and gold were still able to finish tied for the best dual record in the Big 12.

“I think it says a lot about our guys. The fact that we really battled a lot of injuries this year was a completely different year than last year. I like the fact that we were resilient,” Dresser said. “We’re going into the Big 12 tournament with a healthy lineup for the most part and a full lineup and really the best lineup that we’ve been able to put on the mat.”

The Cyclones finished in second behind Oklahoma State at the Big 12 Championships last season.

Dresser is ready to make a run for the title OSU has held for seven years.

To access full brackets for the Championships you can find those here.

To watch the Big 12 Champions here is a breakdown of the schedule and where to watch: 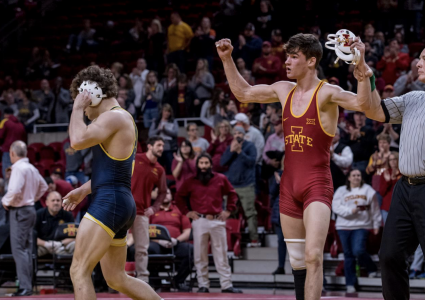 WRESTING: Looking ahead to the Big 12 Championships