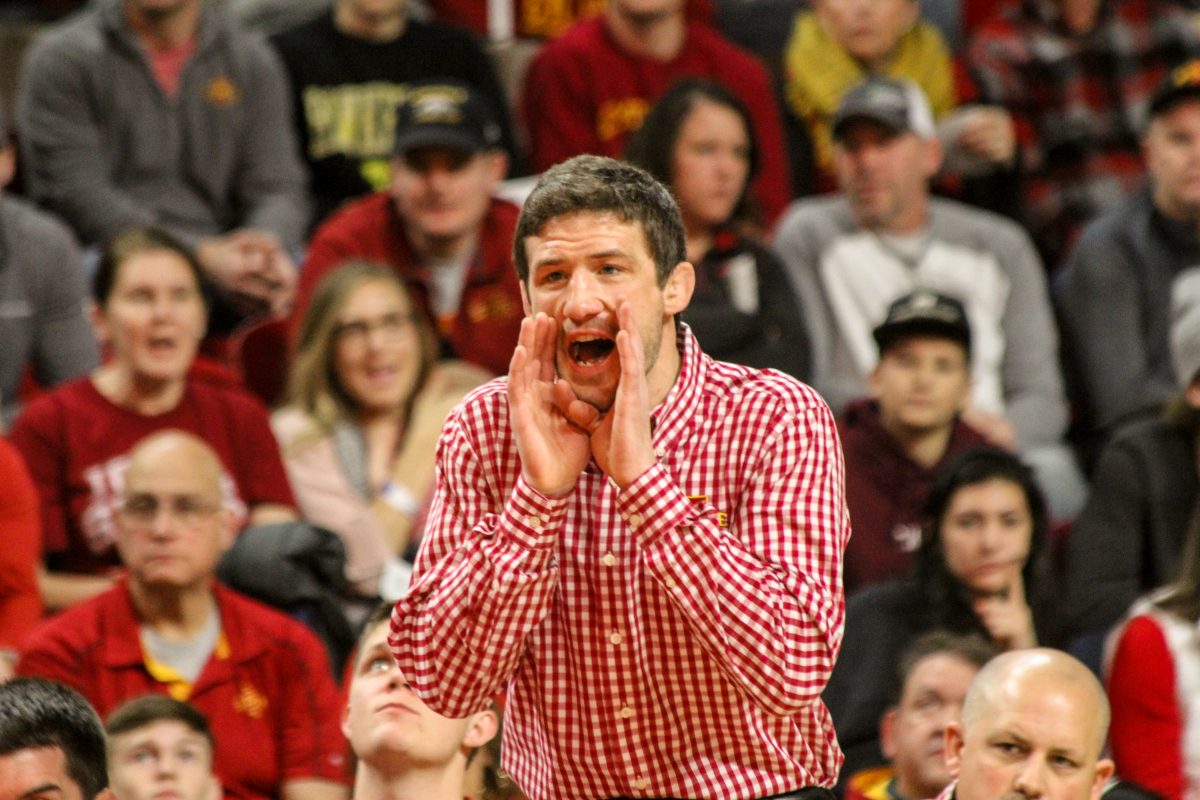 Iowa State’s assistant wrestling coach Derek St. John is a man of few words. He feels most in his element when he’s in the background with his head down, grinding.

“Where I came from and the way I was raised, I didn’t need to put myself out there or be the center of attention. I didn’t need those things to be motivated to wrestle or win or to take that next step,” St. John said.

But as he has continued to grow in his role at Iowa State, the Parnell native has had to step out of his comfort zone to tackle the recruiting trail with head coach Kevin Dresser and assistant coach Brent Metcalf.

“We (the coaching staff) feed off each other. We have such a different dynamic in personalities to wrestling styles. I’ve enjoyed the heck out of it but I’m just not good at talking about myself or hyping myself up. That’s just not my personality,” St. John said.

Thankfully for St. John, he doesn’t need to say much about his collegiate wresting career—it speaks for itself.  He left Iowa as a four-time All-American with a 106-17 overall record.

But even with this legacy, St. John can still remember the lessons and “knocks to the side of the head” that helped push him to be the athlete he became.  He recognizes many of Iowa State’s wrestlers are still in this learning phase.

“You have to keep in perspective that this is a very young, inexperienced team at this level. You have to remember that these weren’t the top tier recruited kids out the country and they’re constantly working their butts off to continue to get better,” St. John said. “I feel pretty good about things when I step back and assess were they started and were they’ve come. I’m very optimistic and upbeat about this group of guys.”

Part of this growing process is helping his wrestlers become better in ways other than wrestling.

“You want to win but when you can step away and know that you helped mold a better person. A better individual, it’s pretty dang rewarding. These guys aren’t going to be wrestlers their entire lives,” St. John said. “They’re going to go on and do other things like gets job, get married or have kids and do so many other things and know that you kind of helped get them in a good direction moving forward is very rewarding also.”

But, as expected, St. John also likes to win. When asked to pick a specific moment that has been a highlight for St. John since becoming a coach at Iowa State, it was watching 149-pounder Jarrett Degen become the first All-American of the Dresser-era and 197 pounder Willie Miklus end his career as a four-time All-American at the 2019 NCAA Wrestling Championships.

“Since I left Virginia Tech, Degen was my first guy to get to the podium. That’s pretty powerful for our program,” St. John said. “And watching Willie getting up there and doing what he did was also very powerful. Those are my two favorite moments as a coach so far.”

But when it comes to his time spent coaching next to Dresser and Metcalf?

“Those two just kind of blackout in the (coaches) corner and I’ll have them by the belt buckles sometimes,” St. John said chuckling. “I had both of them by the back of their t-shirts, I think during the Iowa dual, and I had to reel them back in because we were about to lose team points. That has to be my favorite memory so far. I’m the happy medium for those guys.”