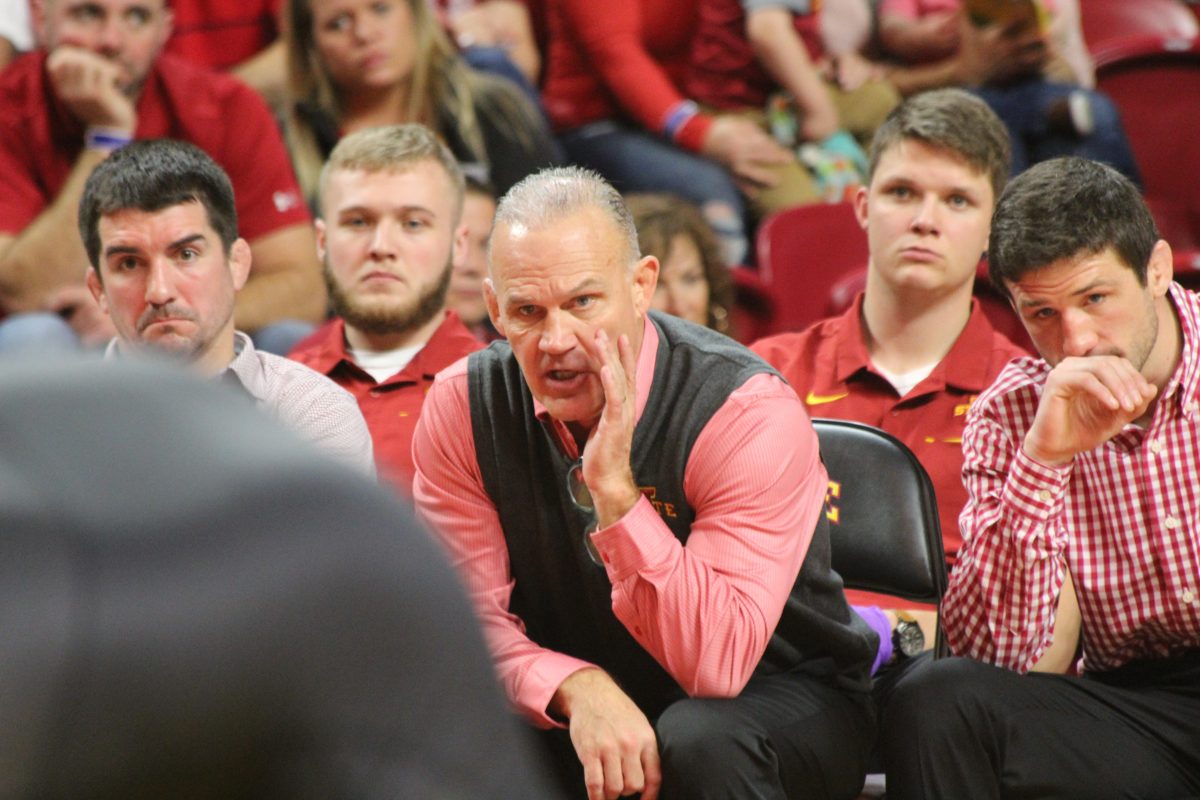 The Big 12 Championship is just a month away and the Cyclones have five duals standing in their way of Tulsa, Okla.

Kevin Dresser and his team are hitting the road once again and are headed to Norman, Okla. to face off against the Sooners following a much-needed confidence boost with a 34-9 win over Fresno State on the road.

What do the Cyclones have to find more consistent success?

“We’ve been inconsistent and part of it is because of youth. It’s been Todd Small’s first time in there, he’s done a great job but still never felt it. Even as good as David Carr, it’s been the first time he’s felt it. Then you have guys like Ryan Leisure, Joel Shapiro and Francis Duggan, those guys have to feel it. There’s been good and bad but that’s just how you learn,” said Dresser. “It’s just unfortunate in sports that Austin Gomez didn’t plan on getting a concussion and Jarrett Degen didn’t plan on having shoulder issues at this time but that’s sports.”

Iowa State’s shining star, redshirt junior Ian Parker, is a perfect example of what that looks like. He also has the most important match of the weekend as he faces off against Dom Demas.

The Michigan native will walk into this weekend with an eight-win streak and hasn’t allowed a takedown since Dec. 7. Dresser has gone as far as to say that if the rest of the team could be like Parker, they would be undefeated right now.

The last time Parker was taken down was against his Oklahoma opponent, Demas. Parker and Demas faced off at the Cliff Keen Las Vegas Invitational where Parker ultimately lost in a tech fall, 19-4.

“You go in and take this guy out and you let the world know Ian Parker is contending for the national title,” said Metcalf. “But he’s got to continue to get to his offense. Get those leg attacks. That kid is darn tough (from) hand fighting, pace, the riding, he’s got all the little elements you need. Moments you’ve seen him at his greatest though is when he’s getting to his offense.”

For a guy like Parker, the greater the challenge the better and facing Demas will bring one of his toughest challenges.

“(Demas is) super athletic. He’s a gamer. If he feels good he’s a hard guy to beat. On paper, we’re the underdog,” said Dresser. “(Parker’s) obviously improved his defense but now we have to continue to improve our offense. I thought he did a really good job stepping up his offense Friday night at Fresno. He’s got his work cut out for him. Knowing Ian Parker he’s excited about this match. It’s a chance to up his stock and he doesn’t get to the be underdog much and he does this weekend.”

Ultimately, it won’t just be a Parker win over Demas that will make a statement for the Cyclones as they try to continue their win streak on the road against Big 12 opponents.

The return of All-American Jarrett Degen against Fresno State was huge for the team. He came back and dominated his opponent before securing a pin. Degen brings leadership to this team that can’t be beaten with such a high pace you can’t find easily.

“He adds that spark and that fun factor. The more our guys see somebody go out and wrestle somebody really hard — He wrestles hard all the time. Just watch that first period, he made that guy wrestle every second of the three minutes. Even when the guy tried to get off the mat, he made the guy wrestle his way back,” said Dresser.

For Parker, who wrestles before Degen, it only encourages him to continue to fight and feels the entire team feeds off of his energy.

“Every time that his feet are on the mat he’s fighting in every position and making the other guy look dead tired no matter what. That’s awesome for me to feed off and I know my teammates would say the same thing” said Parker.

“I think our best wrestling of the season is in front of us,” Dresser said.