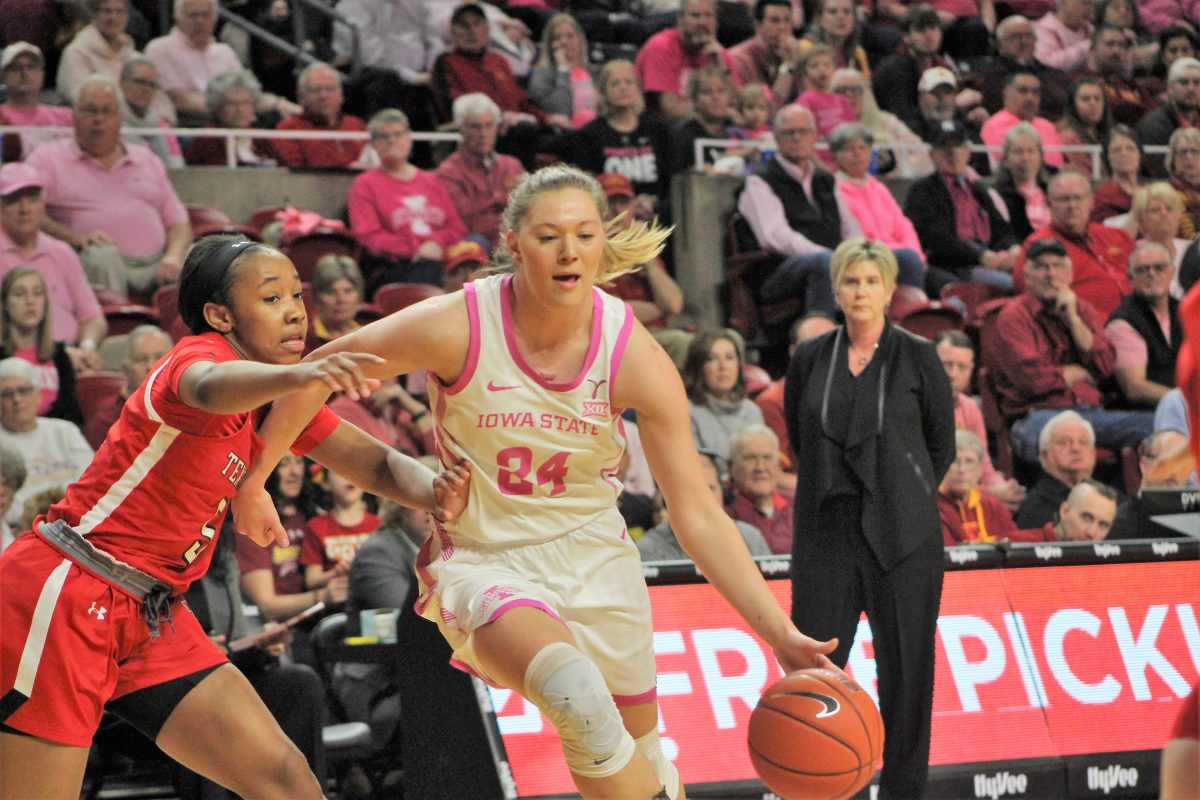 Ashley Joens sunk two free throws to tie Sunday’s game at 74 with a handful of seconds left to play.

The Iowa State women’s basketball team – who had rallied back from a six-point deficit with 37.7 seconds to go – was in a position to send the game to overtime. They would have, too, had they gotten one more stop.

The crowd at Hilton Coliseum thought they did.

Chrislyn Carr shot a three with a couple of seconds left on the clock. It didn’t hit the rim.

Referees said, however, that Rae Johnson fouled Carr on the shot, giving her three free throws to ice the 77-74 win for Texas Tech.

Iowa State coach Bill Fennelly didn’t want to comment on the play, but did have some things to say about his team’s turnovers.

“I wish I had an answer (to all of the turnovers),” Fennelly said. “It has to be coached better. That’s my fault. It’s a huge factor in losing games, and it’s something we’ve dealt with all year. I just don’t think it’s going to get any better at this point.”

The Cyclones finished the game with 20 turnovers, giving the Lady Raiders big points in big moments.

Nine of the 20 turnovers came in the third quarter, but Maggie Espenmiller-McGraw basically shot the Cyclones back into the game, single-handedly.

The freshman hit three shots from behind the arc in a two-minute span to get the Cyclones back in the game.

“(Espenmiller-McGraw) can score,” Fennelly said. “She’s done some really good things. I think her first half kind of kept us in the game. Unfortunately, this is a tough league to learn on the job. You can’t turn it over eight times.”

One steal by Texas Tech completely took away the momentum Iowa State had from a Johnson 3-pointer that tied the game. They capitalized with a 3-pointer of their own, and Iowa State was put in another hole.

The team continued to fight and came back to tie it, but the rally fell short.

“I thought our kids, near the end of the game, kept playing and that’s what we want them to do,” Fennelly said. “We gave ourselves a chance. You’ve got to make free throws and execute defensively. I thought our kids did that… it just wasn’t enough.”

It’s fair to say that had Texas Tech not limited Iowa State’s bonified best scorer, Ashley Joens, then Iowa State wouldn’t have been in that position in the first place.

Joens put up 21 shots in the game, only making five of her attempts from the field. She ended with 20 points, thanks to nine free throws, and 10 rebounds.

“It was more of an inside game (today, rather than it was in Lubbock),” Joens said. “We weren’t knocking down our shots as much, so it got more physical.”

The Cyclones remain one game behind Texas for the No. 3 seed – something that is extremely valuable when the team will look at trying to go further in the conference tournament in Kansas City.

When Iowa State travels to Kansas State on Wednesday, Texas will visit No. 2 seed TCU. If all goes as planned, Iowa State could exit Manhattan in a tie for third.

They have to take care of business, though, like they couldn’t do Sunday.