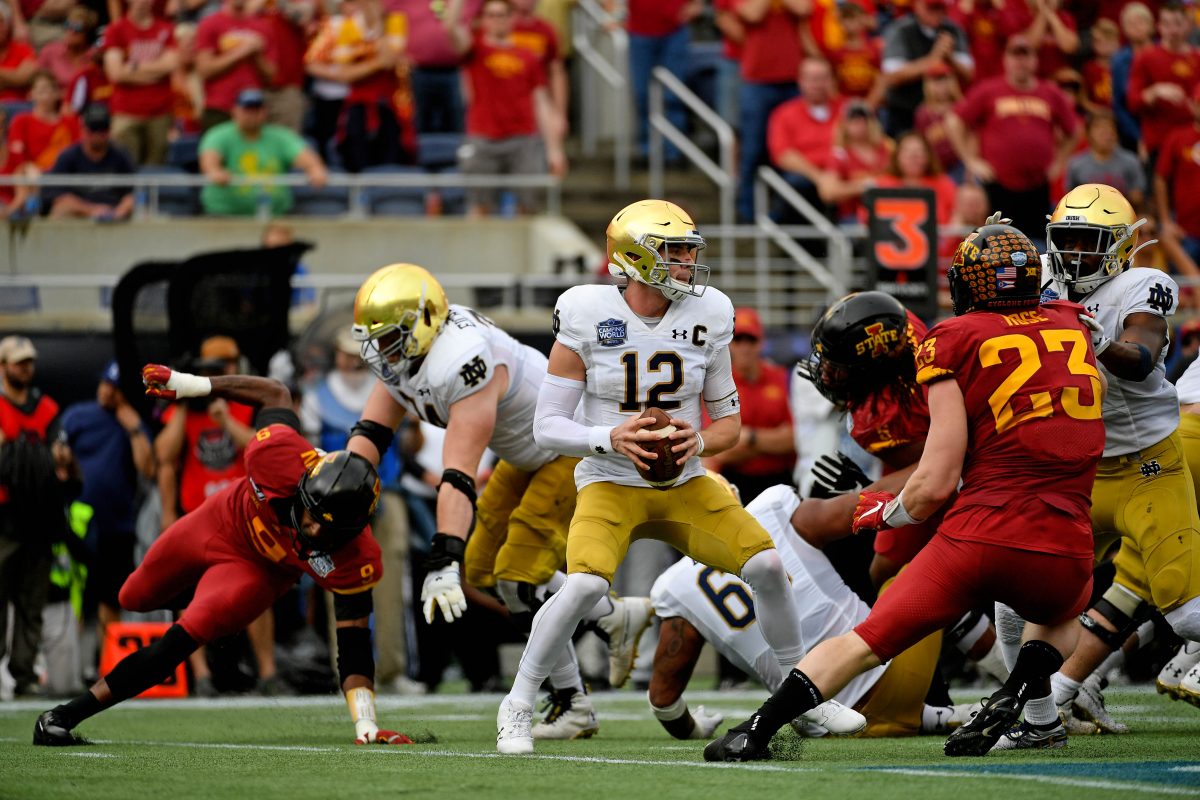 ORLANDO, Fla. — That’s it, that’s all. Another chapter in the ever-growing history book of Cyclone Football is behind us.

Mercifully, Saturday’s convincing 33-9 Camping World Bowl loss to No. 15 Notre Dame ended year No. 4 of the Matt Campbell era with a 7-6 mark. With it, the Cyclones fell a game shy of winning eight games in a season, which would have been for an unprecedented the third year in a row.

From a passionate fanbase to Matt Campbell himself, this wasn’t what anybody entered 2019 striving for.

Perhaps the “prove it” hashtag appeared on our Twitter timelines a year too early? Indeed, there is no “perhaps” about it.

The Camping World Bowl letdown was a painful end to a maddening year. Iowa State failed to be “in it” against a great opponent on an amazing stage as a lead-up to the College Football Playoff.

It was a regretful outcome for all involved.

When it comes to the big picture, my first instinct is to compare 2019 to 2005, where with a dynamic offense and behind a truly elite defense, Dan McCarney’s team lost three games in overtime (one of them in 2OT) and two more in regulation by a combined 13 points. That team could have been 10-2 and in the Holiday Bowl, but instead lost to a then non-power five program in TCU.

Albeit against a more difficult nine-game round-robin Big 12 schedule, the 2019 campaign will be thought of similarly. Iowa State’s five regular season losses came by a combined 21 points. There were more “what ifs” and “should have beens” than I have room for in this column.

Teams are ultimately judged by their final record, so disappointing is how 2019 will be remembered by most of us, and rightfully so.

Upon further review, there is one massive difference I see between the 2005 and 2019 seasons, and that is a silver lining that I’ll leave you with as we put 2019 to bed.

The outlook of what’s to come is much more positive this time around.

Back in those days, it was commonplace for Iowa State to be “up” for a two to three year stretch, but then you pretty much expected the program to fade for a few years upon in order to “rebuild” (or whatever we called it back then) – especially in years where Texas and Oklahoma both appeared on the schedule, which generally pointed to dark waters ahead.

That simply isn’t the case in the present day.

As sour as fans might be about how this season ended (trust me, I get it), with one of the top returning quarterbacks in the country leading the way, Iowa State will likely be a popular pick to stir things up at the top of the Big 12 again in 2020.

From 2005 to 2006, an obvious drop-off was looming. From improved recruiting to the development of those prospects, Iowa State’s cupboard will be full of talent when spring football begins in just a few months.

But there are aspects of this program that will need be addressed in the offseason.

I can guarantee you the “attention to detail” Matt Campbell is constantly preaching will be one of them. From consistent special teams blunders to turnover margin, there is a lot to work on.

The offensive line will once again be a summer storyline. Along with Josh Knipfel, Paul Rhoads era recruits Julian Good-Jones and Bryce Meeker will move on making way for talented youngsters, who we are told have higher ceilings.

Defensively, most of the pieces from 2019 will be back, but perhaps the scheme needs addressed after a still-solid but seemingly less effective season than the two prior. Has the rest of the league caught up to the 3-3-5? What can be tweaked to return the defense to its dominant form in 2017 and 2018?

There are a lot of questions to ponder over the next few months, but if you can take the emotion of another tough bowl and a generally disappointing season out of the way, this is still one of the best stretches in the history of Iowa State football.

From my point of view, the Cyclones won’t be going anywhere for a while. Hopefully coming up short in 2019 fuels a resurgence in 2020.