Sidelined for Tuesday’s game against 1-9 Florida A&M with a sprained left wrist, the Iowa State star guard watched as his teammates built a 13-point first half lead only to see the Rattlers come back and take the lead midway through the second half.

Still, the sophomore sharpshooter believed his team would pull through — until, of course, it didn’t.

Florida A & M — which entered the game as the 324th best team in the country, per KenPom — shot 58 percent in the second half, grabbed eight offensive rebounds after the break and shocked the Cyclones, 70-68, before a crowd of 13,411 at Hilton Coliseum.

Those hardy fans erupted in an attempt to conjure “magic” in the closing minutes, but the Rattlers snuffed it out again and again and in the end, only their jubilant cries rang out and lingered as the stunned crowd shuffled for the exits.

“When you give a team like that confidence and let them hang around as long as we did, things are gonna start going (against you),” said Haliburton, who is expected to be healthy for Saturday’s Big 12 opener at TCU. “You play with fire, you get burned.”

Even at Hilton, where ISU has now lost 13 times in the past two-plus seasons. Tuesday’s setback was so unlikely that ESPN gave FAMU — a team that according to Jeff Borzello of ESPN, had been 0-72 vs. major conference teams over the past 20 seasons — a 1.3 percent chance to win.

That makes this loss historic. The worst kind of historic. And with or without Haliburton, it shouldn’t have happened.

Rasir Bolton’s second-half heroics almost made owning such a defeat impossible. He scored 26 of his 29 points after halftime and scored seven of ISU’s final eight points.

Problem was, the Cyclones couldn’t get a stop. The Rattlers — who had never defeated a power-five program — scored on five straight possessions down the stretch.

“They made a couple tough ones that may be out of character a little bit,” Prohm said. “Give them credit. We gave them great confidence. We’re up (13) in the first half — and that’s my fault. You can’t screw around with lineups. You can’t screw around. You’ve got to know teams out and we didn’t finish the first half well. I said it to my staff in the locker room, I wanted to be up 15. We’re up nine and that was really the difference.”

The Cyclones committed a season-high 18 turnovers, but still had a chance to win in the closing minute.

One stop was needed, but, again, it would’t come.

Instead, an offensive rebound with 25 seconds left gave FAMU a second chance. Rod Melton Jr. delivered with 10 seconds left and Bolton turned the ball over with 2.5 seconds remaining to effectively seal the unsavory outcome.

“You let the game go, but you don’t let the feeling go,” Bolton said of trying to put such a defeat behind him. “This loss hurts. We felt like we didn’t play to our potential to come out and get the win, so you go into practice, you go harder. You learn from your mistakes and you try to carry it over to Big 12 play.”

That starts Saturday at TCU, where, again, Haliburton is expected to be good to go.

“Watching basketball and not being able to play sucks,” he said. “I probably haven’t missed a game since my sophomore year of high school, so it sucked, but it’s a learning experience. We’ve got to take this and move on and get into conference play.”

So Haliburton’s faith in his teammates hasn’t wavered, nor should it.

But the pain associated with Tuesday’s humbling stumble will linger — and it should.

“Losing at home sucks,” Prohm said. “Because I knew we needed to be better at home with this team this year.” 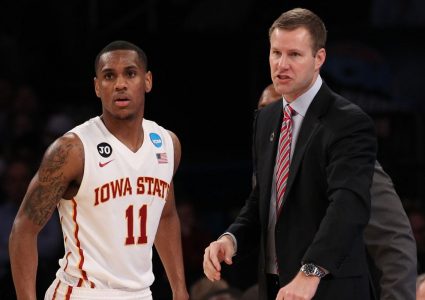