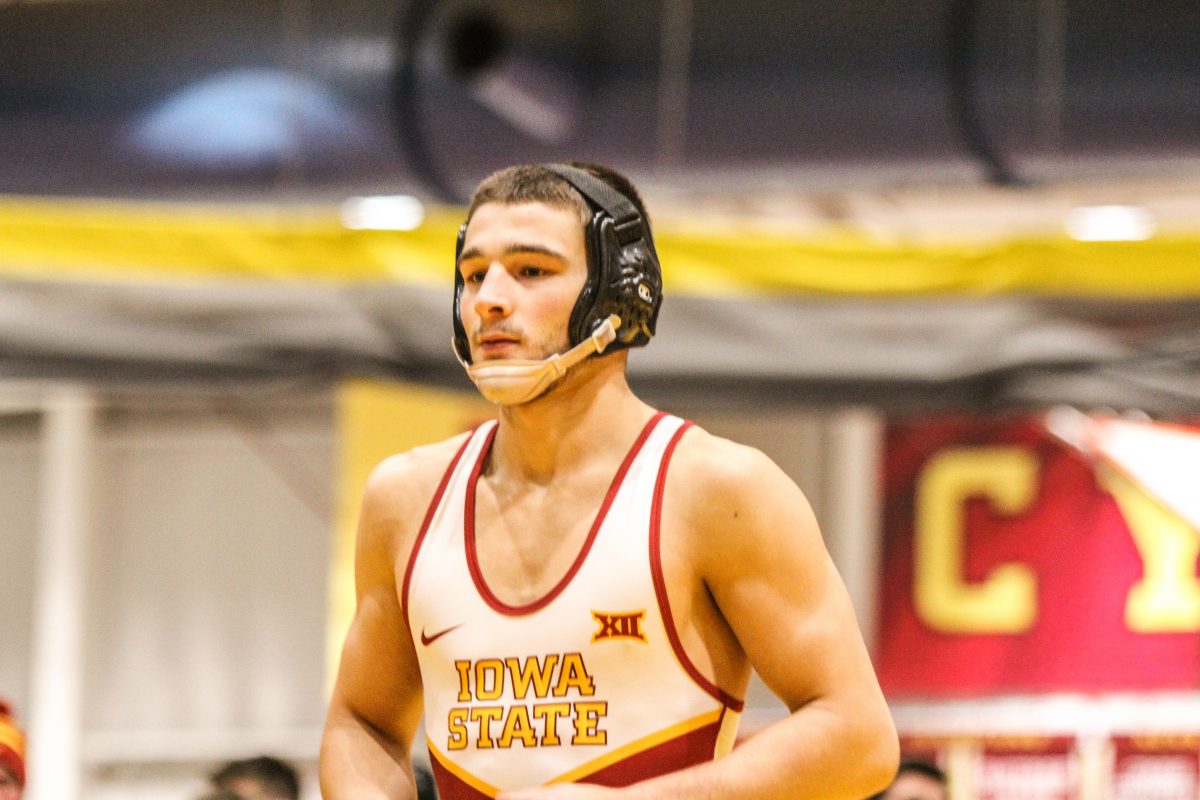 On Sunday afternoon in what it sure to be a jam-packed Hilton Coliseum, Iowa State head coach Kevin Dresser will get his third opportunity to try and break Iowa’s 15 dual win streak in the Cy-Hawk series.

Although the Hawkeyes are heavily favored on paper as they take one of their toughest teams in recent memory to Ames, there is still some hope the Cyclones could upset the No. 2 team in the nation.

The last time that these two programs tangled, the cardinal and gold pushed Iowa’s limits and nearly won in Carver Hawkeye Arena, ultimately falling by a 19-18 final. Even in a loss, it showed the immense growth within the program. But for Dresser and his team, it wasn’t enough.

“We went there to win,” Dresser said during the weekly media availability in regards to last season’s Cy-Hawk dual. “It wasn’t mission accomplished. We went there to win. Everybody got excited because we competed well but when we got on that bus to come back we didn’t get what we came to do.”

How exactly can the Cyclones pull the win?

Bonus Points will separate the winner

Last season’s dual all came down to bonus points. The Cyclones and the Hawks split five wins a piece but it came down to Brady Jennings being pinned at 165 pounds and Alex Mackall losing 13-4 at 125 pounds.

Although the Hawks are coming in stronger than ever, the Cyclones aren’t in bad shape. Nine of Iowa State’s starters are currently ranked. Three of them in the top 10.

Mackall comes in ranked this week at No. 7. He will be facing No. 1 Spencer Lee. In their matchup last season, Lee did what he does best, garnered a strong 11-0 lead in the first period. Nothing came in the second period and then in the third Mackall garnered a takedown to avoid a shutout. If Mackall can scrap and hold on through the first period, things can get interesting by the third.

With the growth we’ve seen from Mackall, he might even push for an upset. It was just two weeks ago that Mackall pulled an impressive win over UNI’s Jay Schwarm. An upset will be tough, but it isn’t impossible for the redshirt junior.

“How bad do you want to beat somebody? If you really, really want to beat somebody you find a way to get it done,” Dresser said. “Alex Mackall is a much different guy than he was last year this particular weekend. I know he’s excited about this opportunity. The only time you get to wrestle a two-time defending national champion you can approach it two ways: No. 1 You can be scared to death or No. 2 you can be excited. A win like that puts you on the map.”

With the absence of Austin Gomez at 133 pounds, it has paved the way for Todd Small to become the guy. In his Hilton debut it ended in 3-1 decision loss.

“I think he got caught up in the moment,” Dresser said. “I can tell you one guy I’ve been super impressed with in his preparation this week is Todd Small. He came out of that match, he wanted to fix it. When you come out of a match win or lose, especially after you lose and have the mentality that you want to fix it? You have a good season ahead of you.”

“It’s a broken record but if you’re going to beat Jarrett Degen you better be able to go hard the whole time,” Dresser said. “In both situations he was down and came back and won. When you sign up for Jarrett Degen you better be ready to wrestle. Lugo is a great competitor and a great athlete. We’re going to change a few things on our end. We think we’ve made a couple of adjustments that can help us. At the end of the day you have two good guys battling.”

Degen was asked what makes Lugo a good competitor:

“He wears black and gold,” Degen said. “That’s about the only real thing that sets him aside from every other wrestler in the nation. It’s just a bigger thing because it’s an in-state thing.”

If there’s anyone in the starting line-up who brings consistent bonus points wins, it’s Degen.

No. 6 David Carr, a Junior World Champion, made his much anticipated cardinal and gold debut last weekend. He is looking at facing No. 2 Kaleb Young, who defeated Big 12 Champion Chase Straw, 8-3 last season.

No. 20 Straw bumped up a weight class with the arrival of Carr to the line up. This, however, wasn’t a bad thing. The shift in weight was only a positive for the Independence native. The 165 pounder will be facing off against No. 5 Alex Marinelli.

Marinelli didn’t have a crazy impressive weekend against Chattanoga. He penned a 9-4 decision over a true freshman. If Straw can show up as the Straw we saw at the end of last season, things could stay lopsided.

At 174, No. 18 Marcus Coleman comes in hot from a win by fall against Bucknell. Coleman has immense talent and impressive wins to show for it but has a tendency of starting rough in the first two periods and then turning his luck around in the third. When going up against two-time All-American No. 3 Michael Kemerer, the Ames native doesn’t have any second to waste.

The greatest transformation on the roster goes to No. 5 Sam Colbray.

The Oregon native is mentally and physically in some of the best shape we’ve seen him. When he steps on the mat, there isn’t much hesitation on whether the 184 pounder can walk out on top.

If the Hawks keep the lineup the way they did last weekend, they will send out Nelson Brands, who is in his debut season. If that changes and No. 11 Cash Wilcke takes the mat, it won’t be an issue for Colbray. He beat Wilcke last season 7-6.

At 197 pounds, Joel Shapiro also had his debut last weekend and unfortunately lost 4-0. His match up against Iowa will most likely be All-American No. 6 Jacob Warner.

Hopefully, getting the first day jitters out of the way can help Shapiro walk on the mat a lot more confident and show everyone why he won the wrestle off.

It was a surprise to a lot of people that No. 2 Austin DeSanto moved up to 141 pounds. If Brands stays consistent with last weekend’s starting lineup, that means DeSanto will face off against No. 13 Ian Parker.

Parker has always been a reliable guy in the lineup but the Michigan native came back stronger this season. Literally, physically, he is bigger and looking stronger on the mat. This is an advantage for Parker as DeSanto has been a 133 pounder.

DeSanto has a unique style of wrestling, which has made him such a big threat. It won’t be surprising if this high paced match up brings Hilton roaring to their feet.

“I’m extremely excited,” Parker said. “I’d like to think of myself as someone who has a high pace as well so I don’t really do anything different to prepare for that. It’s just my style clashing with that style. That’s exciting for me and exciting for fans as well.”

These two are no strangers to each other as they wrestled in 2017 when DeSanto was still at Drexel. Parker won in a 7-5 decision.

“Parker’s a tough customer,” Dresser said. “If DeSanto beats him he’s going to have to get up and get after it. That’s going to be a good match. We’re excited about it. I can tell you this, Ian Parker is chomping at the bit to get that one going.”

If the dual goes with the traditional start at 125 pounds and ends with a heavyweight, the mood will be electric by the time 285 pounds rolls around.

No. 15 Gannon Gremmel will walk onto the mat for Iowa State after leaving it heated following his disqualification after two unsportsmanlike calls against Bucknell.

What makes this a highlight match is because Cassioppi is a redshirt freshman who said he wants to break the pin records at Iowa in an interview with the Des Moines Register.

Pinning among heavyweights isn’t very common. These tend to stay low scoring matches depending how lopsided the match-up might be.

Cassioppi’s fastest pin is in 25 seconds.

Gremmel has also made a lot of growth coming into this season. He spent his offseason focusing on bulking up and getting stronger.

If the Cyclones can push the Hawks back to split matches, then there’s going to be a lot on the line walking into that final match.

If Gremmel can avoid ending up on his back and fights the whole seven minutes, once again, bonus points will separate the winner from the loser.