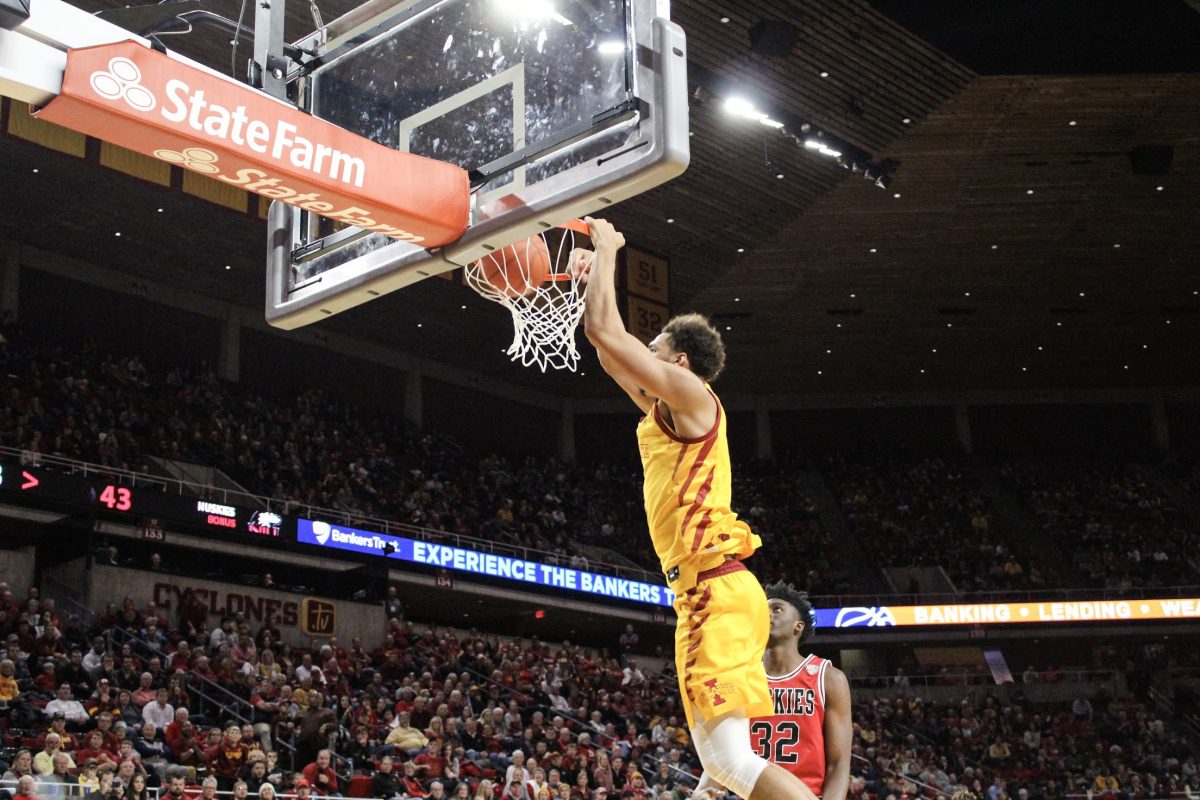 Well, at least Iowa State is not Kentucky.

While the newly anointed No. 1 Wildcats were wrapping up a 67-64 loss to Evansville on Tuesday night, which snapped a 52-game winning streak against unranked opponents at Rupp Arena, the Cyclones were struggling with a mid-major of their own as Northern Illinois built a first-half lead as big as 11 points in Hilton Coliseum.

Iowa State is not Kentucky though and, at least for once, that is something to be glad about. The Cyclones responded to NIU’s three-point halftime lead by holding the visitors to just 18 second-half points on the way to a 70-52 win.

Here are a few thoughts coming out of Tuesday’s game.

We all knew Iowa State would have some nights when it would struggle offensively this season. It was simply bound to happen with this roster.

Take out the pair of treys freshman Caleb Grill hit after the game was already in-hand and the Cyclones shot four percent from deep. Four percent sounds like a new kind of milk available at your local Fareway and not the 3-point shooting percentage of a major conference college basketball team.

“I feel like we got a lot of good looks. They just wouldn’t fall,” sophomore guard Rasir Bolton, who led the team with 17 points on 7-of-15 shooting, and 0-of-6 from three, said. “Caleb Grill gave us a couple, but we’ve just got to get back in the gym and keep shooting.”

This was Iowa State’s first game shooting below 15 percent from three since the loss at TCU last season. It is the newest addition to a list of seven games in which it has happened since 2010 that remarkably includes the 2015 Big 12 Tournament title game the Cyclones won over Kansas 70-66.

This was not a problem of Iowa State taking bad shots, because they rarely were. They just simply would not go in the basket.

“When I chart them tonight, I bet out of the 25, two-thirds of them are probably pretty good looks. A lot of them were dangling around and popped out,” Steve Prohm said. “We need to be in the high thirties from three to be a good offensive team like we want to be. We’ve got to continue to work at it.”

The Cyclones’ offense was able to counteract the poor performance from deep by shooting 51.6 percent from the field in the second half and 43.3 percent overall with 40 points in the paint. The biggest thing they needed though was what happened on the other end of the court…

The only reason this game ended up as a comfortable win was the Cyclones’ second-half defensive adjustments. Primarily, it was their increased energy on the defensive end leading to multiple breakaways and easy transition opportunities.

“I would say our energy and our sense of urgency. In the first half, we were kind of focused on the offensive side. We weren’t making shots all night,” Bolton said. “In the second half, I think we tried to lock in on defense and get transition layups and dunks. I think that really boosted our energy and our confidence up so then we just kept playing defense from there on out.”

A big piece of the defensive improvement from half to half can be attributed to senior guard Prentiss Nixon, who held Northern Illinois star Eugene German to just seven points on 2-of-12 shooting in the second half, which was a stark contrast from the 17 points the Huskie guard scored before halftime.

“I thought Prentiss in the second half was really dialed in, but, collectively, defensively all the guys flew around,” Prohm said. “Then George (Conditt) when he’s in the game, obviously, he provides a huge presence around the basket.”

This was Conditt’s second consecutive true standout performance as he built on his 14 points, five-block performance in the loss to Oregon State by adding nine points on 4-of-5 shooting, four rebounds and four blocks in 13 minutes on Tuesday.

The 7-foot sophomore continues to give evidence to the case that he deserves to see more minutes moving forward. Iowa State is a different team when Conditt is in the game sprinting the floor, catching lobs and protecting the rim.

That is obviously nothing against Solomon Young, who had 15 points, seven rebounds and three blocks against the Huskies, or Michael Jacobson. Both of them have played pretty well in stretches so far through three games, but it is becoming clear the best version of this year’s Cyclones includes Conditt on the court.

“All great defensive teams in the half-court usually have a shot-blocker at the rim,” Prohm said. “(Conditt) can just make up for so many mistakes. He’s been really good the last couple of games.”

Iowa State now goes into a seven day period without a game and an opportunity to self-evaluate before taking on Southern Mississippi next Tuesday in Ames. The staff has three games to look back on when considering the next steps for improvement and adjustments needed in order to start pushing towards their potential.

It seems likely a little extra shooting will be in the cards, as well.