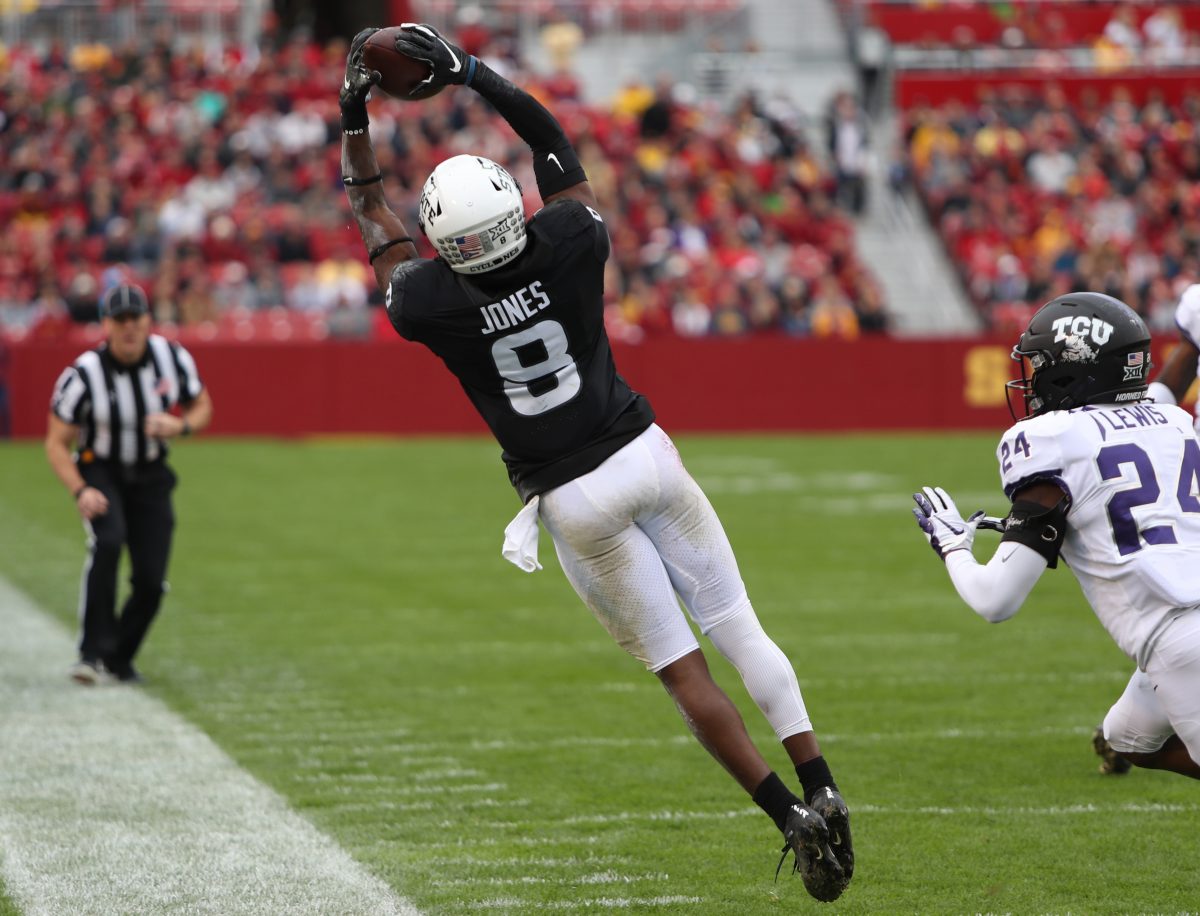 I had just told him his 10-catch, 110-yard performance in Iowa State’s 49-24 win over TCU on Saturday at Jack Trice Stadium had elevated him to No. 6 in school history in career receptions and No. 9 in career receiving yards. The longtime sidekick to two of the best receivers in the history of Iowa State football nodded, then smiled.

It has been three years since the Cincinnati native burst onto the scene as a true freshman, catching 37 passes for 536 yards and six touchdowns. All three of those marks rank in the top-5 in school history for freshmen.

Still, until this season, Jones had never been the star. That will be the case when you’re sharing a pass-catching corps with guys like Allen Lazard and Hakeem Butler, arguably the two best to ever play the position in Ames.

“We’ve gotten so many good examples in this program over the last three years of guys that have bided their time, continued to work really hard at their craft and then when their opportunity to shine has come, they’ve taken advantage of it,” Matt Campbell said earlier this week. “Deshaunte is no different. Deshaunte has made really good plays for us. I remember the first play he makes in the Baylor game our first year here where he catches the ball over the middle and scores a touchdown as a freshman (then) to the play against Baylor last year and it was a huge touchdown. The thing you appreciate about Deshaunte is when his number has gotten called, when the ball has gone to him, he’s made a play. Now, he’s become that guy as more of a ‘How do we get the ball to No. 8 in critical moments?’ I think it continues to be a great example for the players in the program.”

Jones’ 37 receptions and 444 yards through five games are both team-highs. Saturday afternoon against the Horned Frogs, he was one of the most important cogs to the Cyclones jumping out to a 21-3 lead before halftime, compiling eight catches for 89 yards before the break.

“I need to tell him to stop hogging the ball. He’s taking all the catches,” redshirt sophomore tight end Charlie Kolar, who had one catch for a 25-yard touchdown against TCU, joked. “No, really, he made some incredible catches. I think he made one with one-hand when he didn’t even need to. That was kind of funny. We have a lot of guys that can make plays.”

A lot of guys did make plays for Iowa State on Saturday. In Brock Purdy’s 19-of-24 for 247 yards and two touchdowns passing performance, he connected with nine different receivers. Jones led the team being on the receiving end of 10 of those completions.

The other nine guys — get this — each had one reception. Apiece.

Not bad for a guy who is getting his first opportunity to be a focal point of the offense, but, then again, he did have some pretty good guys to learn from.

“(Couldn’t have done it) without the guys ahead of me, guys like Hakeem, David (Montgomery), Allen, guys who were out there being vocal and we needed that on offense (the last two years),” Jones said. “There’s not a lot of veteran receivers on the team and not a lot of veteran guys on offense so (it was important) for me to step into that role and become a leader.”

Jones is the fifth Cyclone to record 10 or more receptions in multiple games during a season and the first since Damien Groce in 1998. Iowa State needed pass catchers to elevate their game this season after losing dynamic playmakers like Montgomery and Butler.

Multiple Cyclones have done that so far this season, but, outside of Brock Purdy, it is hard to argue anyone has elevated his game like Jones.

“Deshaunte is reliable. He’s a senior and he stepped up his game in the offseason as far as being a leader,” Purdy said. “He’s making big plays now. He’s always reliable to go to on first down, second down, third down or fourth down. He means a lot to us.” 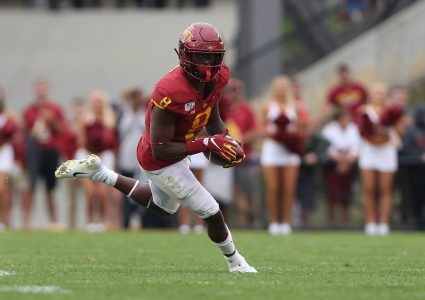 FOUR, NOT 14: The biggest stat for Deshaunte Jones in ISU’s week one win