DALLAS — Iowa State doesn’t participate in the Big 12 media days until Tuesday, which left most of Monday for me to network and prepare for the upcoming season.

Cyclone Fanatic football analyst Jay Jordan is here with me this week. Stay tuned for his notebook on all things football and musings on the five teams that took the stage.

Below is my notebook dump on the peripheral stuff that’s going on within the league.

We will have loads of Iowa State-only stuff tomorrow.

I was randomly waiting for the kind workers at Jerry World to refill the big, stainless steel coffeepot and started up a conversation with a random guy in a suit, you know because I’m such a social butterfly. The guy just happened to be Alamo Bowl CEO, Derrick Fox – who turned out to be a really good dude.

We discussed what I do with Iowa State, which obviously led to a conversation regarding last year’s Alamo Bowl. From him chugging Busch Light beside Jamie Pollard at a pep rally to Iowa Staters overwhelming the Riverwalk, Fox raved about Cyclone fans and their passion.

I didn’t quote Fox or anything like that as it was just a side conversation but what stood out to me was his account of past conversations with Pollard regarding Iowa State’s craving to make it to San Antonio. Fox noted Iowa State’s fan base and its patience for a winning football program, which is finally paying off.

Of course, what did I expect the Alamo Bowl CEO to say? He was going to be positive about a fan base that made his organization millions of dollars last year. But getting somebody else’s perspective on Iowa State’s growth over the years was beneficial for me.

Bowlsby shoots down any talk of Big 12 expansion…

I’ve covered plenty of media days when we were down here with very real fears about Iowa State’s future in a power five conference. The tone from league commissioner Bob Bowlsby could not have been more opposite on Monday. His attitude about the Big 12’s future was very upbeat.

“I think our ADs and our board are the most aligned that they have been in the seven years that I’ve been with the conference,” Bowlsby said in his opening statement to the hundreds of media members in attendance.

The Big 12 recently distributed $38.8 million to every member of its league — which doesn’t account for third-tier rights (like the Longhorn Network and Cyclones.tv). According to Bowlsby, the league’s distribution to its schools has increased by 55 percent over the last five years. That’s a big number and money talks. As of now, according to Bowlsby publicly anyway, there is no reason to even think about expansion at this time.

“We have had no expansion discussion at any level,” said a very matter-of-fact commish. “We like the 10 we have. We think the full round-robin is the right way to conduct competition and in the case of our basketball, full double round-robin. We are distributing record revenues and we have media opportunities and I don’t anticipate that to be an active topic on anybody’s agenda within the conference anytime in the foreseeable future.”

Which brings us to the big conversation regarding the future of college athletics, conference realignment and media…

The real story here is what five years will look like as far as media goes. What direction is this giant ship heading in?

“What I can tell you is we are not going to see an environment where cable television is going to see more subscribers, “Bowlsby said. “That doesn’t seem likely.”

Bowlsby went on and promoted the Big 12’s upcoming digital network – which will be called Big 12 Now – on ESPN+. But the real question is what the media rights landscape will look like in two summers when all of these talks heat up again — and they will. Bowlsby said that anyone who claims to know what that will be is “delusional.”

The one thing we do know is that things are certainly moving more towards digital. This was expected, and is significant for a couple of reasons:

—  It’s why a Big 12 digital network is going to exist. Cyclones.tv does quality work but doesn’t have the man power or funding to pull off a broadcast with the technology of a partner like ESPN, which is owned by Disney.

—  If this media landscape existed 10 years ago, Rutgers wouldn’t be in the Big Ten — just my opinion. That’s only one example, but I question if any of the major realignment would have happened a decade ago in the current landscape.

Everything is different now, which will only benefit a school with a passionate fan base like Iowa State going forward. Back in the day, geography was negatively impacting Iowa State in the college athletic’s arm’s race, not merit.

Without thinking about it, Iowa State fans will pay 10 bucks a month to watch their Cyclones. Would Rutgers fans do the same?

This time around, it won’t be cable networks trying to “buy eyeballs,” even ones that don’t exists (being in households doesn’t actually mean people are watching).

This next round will be more based off of passion and the actual product than being located at the right spot on a map.

The best idea I’ve heard yet on scheduling…

If you listen to my radio show or podcasts on general college football conversations, you’ve definitely heard my complaints about trying to measure one league vs. another when it comes to the College Football Playoff every December.

Without blowing the entire thing up and realigning conferences into smaller divisions, I don’t know how to fix it. Bowlsby came forward with the best idea I have heard yet…

“If it were left entirely up to me, I wouldn’t make any stipulations about how many games you have to play to decide your conference championship. I would advocate for a policy that says everybody plays 10 autonomy games and you can play eight conference games or seven or nine, or whatever you want to do. But everybody has to play 10 autonomy games and that way the portfolio is relatively the same. We all know there is a fair amount of variance from the top to the bottom of even the FBS, even that’s not ideal. But that’s what I would advocate for.”

You can tell that folks in the Big 12 are starting to tire of the “no defense” commentary that the league often gets wrapped up in.

“I want to see pencils moving and fingers tapping on this,” Bowlsby said. “Last year, of our seven bowl games, six of the seven were held below their season averages offensively by Big 12 defenses. Contrary to popular belief, there are kids that tackle in the Big 12.”

Oklahoma State head coach Mike Gundy summed things up the best though. Gundy, who attended his 15th Big 12 media day, described what it is like for a young defensive coordinator in the Big 12 having to adapt to how the league approaches offense.

“The offensive coordinators in this league are not only trying to score, but score on every play,” Gundy said.

So true. It’s a different type of football. A fun one for fans. A nightmare for defensive coordinators.

The Pooka Williams controversy was bound to be a talker on Monday and in an awkward, scatterbrained opening statement, Les Miles somehow made things worse.

So here’s some of Les Miles reading his statement on Pooka Williams. pic.twitter.com/JUWcnMnOia 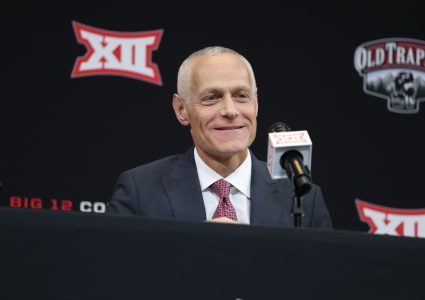 WILLIAMS: Yormark makes it clear that media rights are priority No. 1 going forward for new Big 12 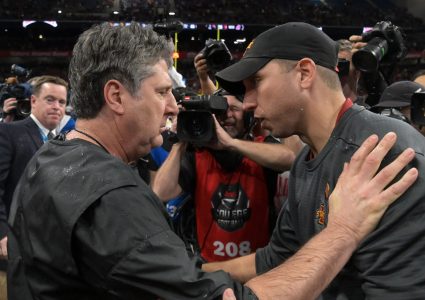