He does know he feels that way, though — which means a lot for the talented Iowa State sophomore-to-be as he prepares for the Cyclones’ August 10-20 trip to Italy.

“I feel like I can take a bump more,” said Haliburton, who averaged 7.9 points and 6.9 assists while helping USA Basketball’s U19 team win gold earlier this month in Greece. “Defensively, when I got here I felt like I could stay in front of people, but after a while they would just run through me or something like that. I feel like I’m better at that and just my lower body, keeping my balance, and my athletic ability to jump higher — I just feel I’ve improved in a lot of ways.”

The 6-5 standout from Oshkosh, Wis. has been easing back into practice after attaining gold. He got some lifting in upon returning to the team a little more than a week ago and feels relatively fresh now despite being in the midst of a very busy summer of basketball that will include a three-day stint at the prestigious Nike Basketball Academy before flying to Italy.

“It’s just getting my body right and my sleep schedule right so I only took a couple days (off) because I knew I had to get back to lifting,” Haliburton said.

Soon, he’ll be off to Europe — again — along with the rest of his teammates.

Cyclones coach Steve Prohm said the overseas trip will be structured similarly to past excursions abroad. It’s as much about team bonding as it is about basketball — but that doesn’t mean one aspect overshadows the other.

“We’ve got seven returners, six new (players), but they’ve done a good job up to this point,” said Prohm, who plans to have the team embark on an Amazing Race style game as he did four years ago while in Spain. “But relationships, they’re not built in a two weeks or two months. I’ve talked about that before. It takes time and you’ve really got to invest.”

The 10 extra practices that accompany overseas adventures help build those bonds as much as flight seating and roommate assignments.

Prohm hopes the three games in Italy will allow him and his staff to assess how well ISU will be able to play “big” more frequently this season with forwards Solomon Young, George Conditt and Mike Jacobson.

“I think it will help me, too, have a good feel of, ‘Hey, can we play big? Is this the right thing if we’re gonna play big? Running this? Does it look good, does it look crisp?’” Prohm said. “‘Can we play four-out, five-out with a big lineup?’ Things like that, so I think it’s good.”

“Last year I was down there banging the whole time, but I did get in some switches a little bit,” the 6-9 senior from Waukee said. “I thought I did OK for the most part. This year, just guarding smaller guys, maybe quicker guys, but I think I can use my size and my length and my strength (so) if they get by me, get back in front of them and wall them up. So I’ve got some advantages there, too.”

Haliburton believes the overall backcourt defense can be stronger this season — and Colorado State transfer Prentiss Nixon becoming eligible is a big reason why.

“He’s our best perimeter defender and probably is gonna guard the best player on every team,” Haliburton said. “So just looking forward to getting him into real games and stuff like that.”

So is Nixon, who sat out last season as roommates Marial Shayok (who signed with the Philadelphia 76ers this summer) and Jacobson came off their sit-out year. He worked alone as they played on the road — and those solo efforts are paying off.

“These will be the first couple games that actually mean something (to me), since March of 2017,” Nixon said. “So it means a lot to me. I take everything seriously, as I always do, but it’s also a good time to help our team get better and help (me) become a better leader.”

That’s what playing for Team USA helped Haliburton become. Now he’s being asked if he’s the “face of the program,” which, as he noted, is a world apart from where he was pegged at this point a year ago.

“That’s not really for me to decide,” Haliburton said. “I guess it’s for you guys to decide who’s the face of the team. I don’t really care, at all. I just want to win. So if my face is in the front of that, that’s cool, but I don’t really want that glory or anything like that. It’s obviously a team thing. But, yeah, I have a lot different world than I did last year coming in from being somebody who didn’t know if they were going to play to being one of the guys. It’s just going to be a lot different this year.”

NO NEWS ON RASIR BOLTON

Prohm said he hopes to know in “the next three to four weeks” if skilled Penn State transfer Rasir Bolton will be eligible immediately this season, but as of now, he remains in wait-and-see mode.

“Nothing new,” Prohm said. “Those things take a long time, because we’ve gotta get our ducks in a row and get all of our stuff we need to to to present it. So, doing that — and hopefully, I’m hoping, in the next three to four weeks we’ll know, but it’s still a process.”

Prohm added that Bolton — who scored a whopping 63 points in one Capital City League game this summer — will play during the three-game Italy trip, but everything else is in a “holding pattern.”

“There’s nothing we can do,” Prohm said. “We wouldn’t be doing anything different with him in any other situation, so you don’t want to do things too quickly and not have everything in place, so he’s good. He’s been really good for us.” 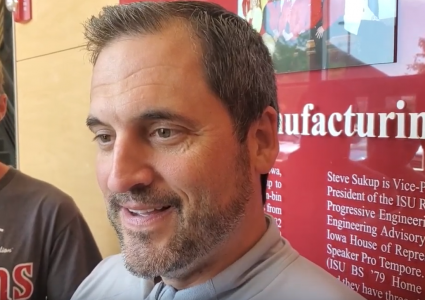