At this time last year, when Zion Griffin should have been preparing for his freshman season at Iowa State, the 6-foot-6 forward was rehabbing from knee surgery. It was the start of a stretch of injuries that kept the Darien, Ill. native from making much of an impact for the 2018-19 Cyclones.

Now, Griffin is back to full strength and playing in the YMCA Capital City League for the first time — hoping to carve himself a role in Iowa State’s crowded frontcourt alongside senior Michael Jacobson, redshirt junior Solomon Young and sophomore classmate George Conditt.

“I feel like it’s a big step forward for me to get a little work in during the summer. I’m ready to get to work, honestly,” Griffin said on Sunday. “That’s the biggest thing I’m looking forward to. I feel like I can help the guys a lot more in the training and stuff that we’re doing. Hopefully, I stay healthy. God bless, I stay healthy. I’m ready to get to the season.”

Griffin has been one of the standouts of the league through three weeks this summer despite playing in only two games. He’s averaging 42.5 points on 50 percent shooting from the field and 33 percent from 3-point range plus grabbing 8.5 rebounds per game.

He is finally showing the potential that made him a four-star recruit and one of the crown jewels of Iowa State’s 2018 signing class. It is a far cry from the guy who averaged just 1.8 points and 1.6 rebounds in 6.6 minutes per game while appearing in 17 contests last season.

“It’s big. Last year around this time, I was just getting surgery,” Griffin said. “It’s a big difference from sitting out. Now, having a lot more time on my hands where I can get in and work on my game and get ready for the season.”

The chance of Griffin earning serious rotational minutes this season could rely heavily on his ability to shoot from deep. The former Hinsdale South standout will have to earn his spot on the floor with proven players in Jacobson, Young and Conditt all in front of him.

Even despite his lack of experience so far, Griffin has already started taking some of the Cyclones’ young freshmen under his wing as their prepare for their first season of college basketball.

“All of them are my favorite. I love all the freshmen,” Griffin said. “We all clicked as soon as they stepped on campus. Those are my little guys. I look after them and they look after me. That’s how that goes.”

Regardless of how much time Griffin earns during his sophomore season, he is still relishing the opportunity to make more of an impact for the Cyclones — whether that be in practice or games. It is all going to be a long way from where he was just 365 days ago no matter what happens this winter.

“It’s a lot different when you’re not playing and then when you’re back playing, the chemistry kind of changes,” Griffin said. “I feel like we’re building a lot of chemistry. I’m ready to get started… Excited is an understatement.” 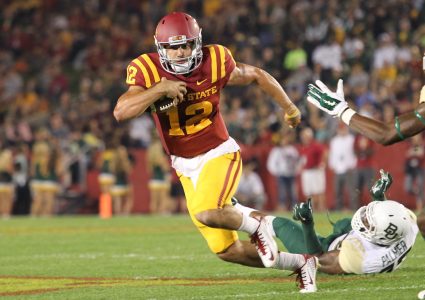