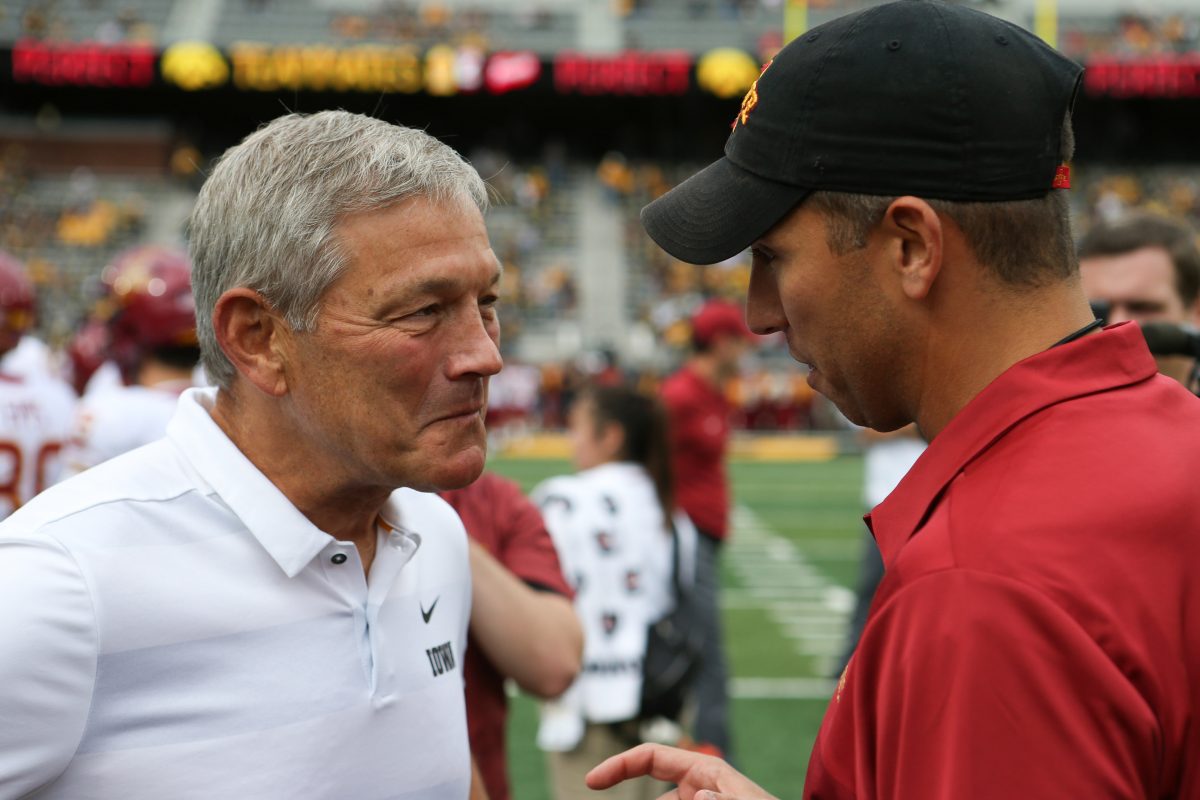 Iowa State is coming off of its second straight eight win season and is nearly a unanimous pick for a third place Big 12 finish in 2019. Obviously, the football program is currently thriving in Ames.

A fact that I have mentioned a handful of times this spring but is still difficult to wrap my mind around: Iowa State just lost its two most explosive offensive players (David Montgomery and Hakeem Butler) early to the NFL Draft and still – expectations have RISEN for the following season.

But there’s an elephant in the room. My goal today is to ponder if this is a fully grown adult elephant or, due to Iowa State’s recent success in the Big 12, just a baby one?

Year one – the 2016 game – was rough. A 42-3 butt whooping ended up being the turning point of Campbell’s culture change (ask around). So as painful as it was, I guess a little bit of good came from that specific beat-down in Iowa City.

Year two – the 2017 game – was the one that got away. A 44-41 overtime loss, Iowa State led late in the fourth quarter and pardon the cliche, simply ran out of gas compared to the deeper, more experienced Hawkeyes.

Year three – last season’s snoozer in Iowa City was a mess from the start. Iowa deserved to win the game as Iowa State’s offense was unimaginative and bland following the first drive. But it’s hard not to wonder “what if” the Cyclones had gotten that first game under their belt following the cancellation of game one’s bout vs. South Dakota State.

The reason I’m writing about this today is because last week – when the point spread (Iowa State -2) was released for the 2019 game – I had a guy tweet at me referring to it as a “must-win” for the Cyclones. While back home this weekend visiting family, an old friend of mine made the same type of comment.

Must-win or else what? Like, you want him fired? The program is in trouble? What does “must-win” mean in this context, exactly?

I find the situation that Iowa State is currently in to be fascinating. It isn’t a perfect comparison (as Iowa has obviously been doing fine itself over the last decade) but for so long, McCarney, Rhoads and even Chizik teams consistently beat the Hawkeyes but fell well short of expectations in the Big 12. In many of those seasons, Iowa would lose to Iowa State and then go on to have success in the Big Ten.

Despite being the winningest coach in Iowa history, Kirk Ferentz is only 11-9 against Iowa State.

Under Campbell, the in-house scenarios have been reversed at Iowa State. There has been literally no success against the in-state rival, but an obvious trend has formed during the Campbell years: start slow but play your best football when it matters most (in October and November).

Remember, that’s what Iowa fans used to mock Iowa State for NOT doing back in the day? That Super Bowl stuff…

I’m just pondering what the importance of the 2019 Cy-Hawk game will have on the program because based off of my interactions with a handful of fans this spring/summer, this is on top of the minds of many.

There is always the recruiting angle to the Cy-Hawk game, but Iowa State’s program has never recruited better than over the last three years. All were coming off of losses to Iowa. Perhaps the game impacts a kid or two over the span of a few years, but losing to the Hawkeyes clearly hasn’t inhibited Campbell’s staff’s ability to thrive on the road. I’m a believer that the recruiting landscape has greatly changed since the early 2000’s, when winning this game truly mattered on the trail. Now, in a more national landscape, I believe a program’s greater whole is much more vital to recruiting efforts than one rivalry game. This is especially the case in a state like Iowa where there just aren’t that many D-I prospects.

What about momentum? Same deal. Campbell’s teams have consistently gotten better as the year goes on. While somewhat frustrating, it is much better than peaking in September and struggling due to a lack of depth when injuries start to pile up during the cold months.

For one, it is a highly emotional rivalry game that everybody obviously wants to win.

The 2019 Cy-Hawk game is specifically important in Ames for the most simple reason of all. Winning it would be another check off of the box for a coaching staff that has taken Iowa State football to new heights in the modern era. Dislike them all you want, but defeating Kirk Ferentz and Iowa would be a heck of an accomplishment for Campbell and his staff.

Most importantly, while non-conference games are “different’ compared to those within the league, you only get 12 opportunities to suit up during college football’s regular season. Wins and losses – whether it’s UNI or Oklahoma – all count the same at the end of the year.

When you really break down Iowa State’s 2019 schedule – there are a handful of swing games that will ultimately dictate how history looks back on the season.

Iowa – in a likely battle of two top 25 teams – is the first of those.

Beating the Hawkeyes would be great because of the rivalry – but when stripped down to the nuts and bolts – most importantly would avenge the one negative trend (those early season lulls) we have seen in Ames so far under Campbell.

Go undefeated in the non-conference and who knows what type of success could be in store for the Cyclones in the Big 12.

Is it August yet?