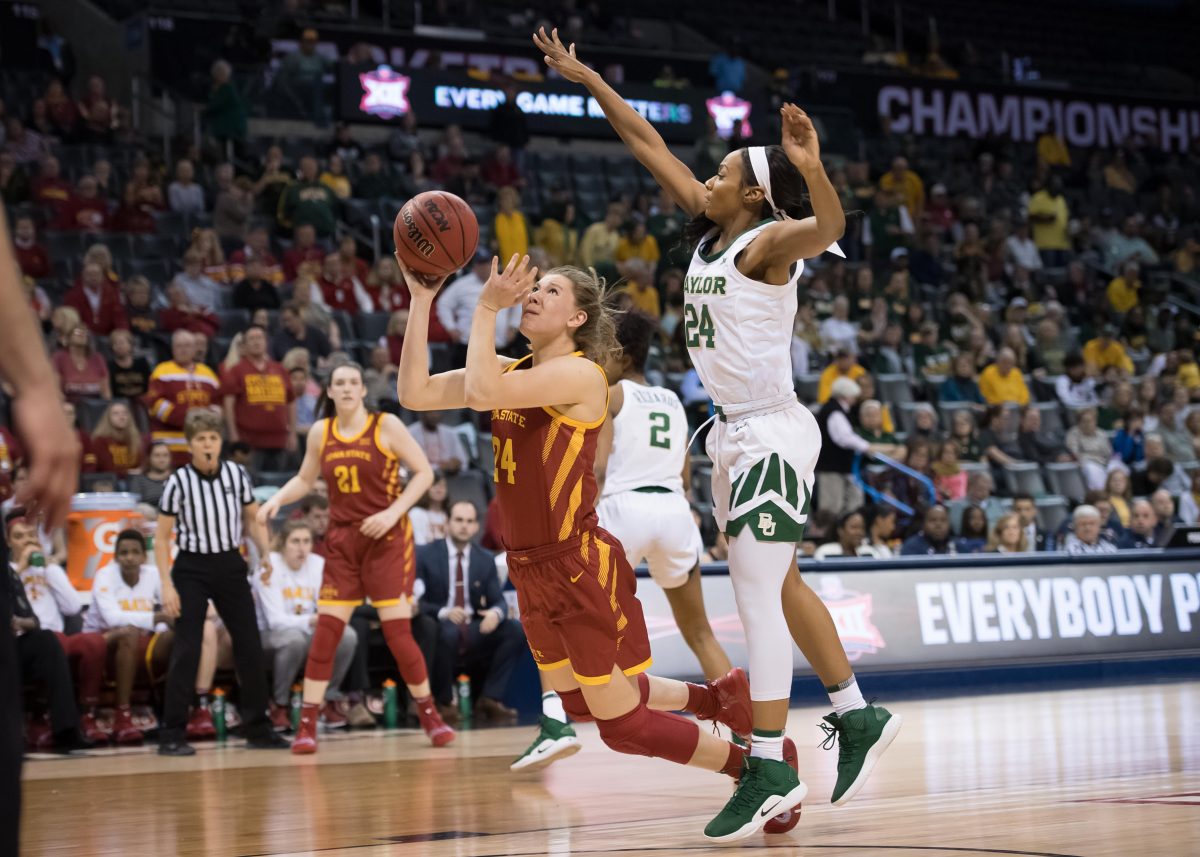 For the first three quarters of Monday night’s Big 12 Championship Game, it looked like Iowa State might upset the No. 1 ranked Baylor Bears.

The Cyclones entered the fourth quarter trailing 48-44 and had been given one of the best games of the season from senior Alexa Middleton – who played nearly the whole contest for the second night in a row.

However, a five-point fourth quarter by Iowa State eventually gave Baylor time to put together a run and take another championship, 67-49.

The biggest stat to look at in the loss, though, could be the team’s mark from the three-point line: 3-for-15. That came just 24 hours after shooting 9-for-15 from behind the arc in the first half of a semifinal win over Texas.

Just think what could have happened if the usually well-shooting Cyclones hit a few more of those.

Middleton finished the night with a team-leading 18 points and proved again how big of an addition she was to the team this season.

Big 12 player of the year Bridget Carleton added 13 points and a team-high six rebounds as well.

Meredith Burkhall and Ashley Joens combined for 15 points on the night, and if you’re doing the math at home, there wasn’t much behind that.

Iowa State coach Bill Fennelly told Fox Sports that he wanted more out of his bench. Aside from those four, the only other points recorded were from a three-pointer by Kristin Scott that came with three minutes to play.

With her performance on Monday, Carleton brought her career scoring mark to 2,088 points – 61 behind Angie Welle’s school record 2,149.

The further the Cyclones go in the NCAA Tournament, the closer Carleton would be. That’s good news for fans who want to see history being made, as the team sits in a great spot.

During the last NCAA women’s basketball seed reveal, Iowa State was put in the second No. 4 spot. Since then, the Cyclones bolstered their resume with back-to-back wins over Kansas and another victory over the Texas Longhorns.

If the committee views keeping things close with Baylor for three quarters that big, it might bump the Cyclones up. Iowa State got a little bit of help, too.

The lone No. 4 seed slated in front of them was Miami – a team the Cyclones beat at Hilton Coliseum in November (Note: don’t get me started on the head-to-head argument). The Hurricanes were downed in their first game in the ACC Tournament by Syracuse.

The next team up was South Carolina – seeded as the final No. 3 seed. The Gamecocks were bounced in the first round of their conference tournament too, losing to an unranked Arkansas team desperate to make a run to the big dance.

We’ll keep going. Oregon State held the No. 11 overall spot in the seed reveal. The Beavers were also eliminated in their first conference tournament game.

There’s a week between now and Selection Monday – where the women’s bracket will be revealed – and time for a lot of speculation.

With three teams ahead of Iowa State losing early on in the postseason and the gutsy performance they showed against Baylor, there isn’t much more that a fan could ask for.