The win puts ISU in sole possession of second place in the Big 12 and allows the Cyclones to control its own fate in terms of securing the No. 2 seed in next weekend’s Phillips 66 Big 12 Women’s Basketball Championship.

Joining Carleton in double figures was Ashley Joens, who had her fourth 20-point game of her young ISU career with 22 points. Kristin Scott had 11 points.

The Cyclone offense was clicking and balanced from the start, with Bridget Carleton, Ashey Joens, Rae Johnson and Alexa Middleton all hitting 3-pointers to push the visitors ahead 16-4. ISU’s shooting was on point, going 11-of-20 (55 percent) from the field and committing no turnovers en route to a 27-10 first quarter lead.

Carleton’s 3-pointer to open the second made it a 20-point game, but UT responded with a 7-0 run to cut into the ISU advantage. However, the Cyclone lead was comfortably restored by Joens, who had four first-half 3-pointers to give the Cyclones a 42-23 halftime lead.

The Cyclones had a challenging start to the third quarter, allowing UT to cut the Iowa State advantage down to 11 at 47-36. Fortunately for ISU, the shots then stopped falling for the Horns as well, as they went two minutes without a bucket before ISU kicked back into gear with a 7-0 run to get ahead 54-36.

The fourth quarter started well for ISU, as the Cyclones hit four of five shots to get back ahead by 19 at 64-45. Iowa State’s offense hit a wall and went over three minutes without scoring, allowing Texas back within 12 at 64-52. UT still could not make the next steps back into the game until the result was decided, as ISU stayed ahead by double figures until the final two minutes. Iowa State took care of business at the charity stripe, going 22-of-25 at the line for the game, including 14-of-15 in the fourth quarter.

Bridget Carleton marked her historic evening reaching 2,000 career points with her seventh-straight game over 20 points, finishing on 23. She also had her 11th double-double of the season with 12 rebounds.

Ashley Joens had her fourth game with five 3-pointers as a Cyclone and her first since draining six against Oklahoma on January 19. The freshman finished with 22 points on 6-of-12 shooting, including five 3-pointers. Joens also had her best night from the free throw line, making a career-high 5-of-5 from the charity stripe.

Iowa State returns home on Monday for the regular season finale and Senior Night against Kansas. Tip between the Cyclones and Jayhawks will be at 6:30 p.m., with Cyclones.TV Powered by Mediacom televising the contest. 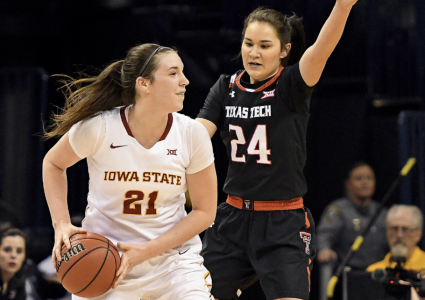