The Iowa State women are as fun to watch as ever.

The renaissance is real.

Bill Fennelly‘s Cyclones (25-8) are surging into the NCAA Tournament after missing the “Big Dance” two of the past three seasons — but all that momentum couldn’t propel them above a four-seed, according to ESPN bracketologist Charlie Creme.

“I think they’re a four,” said Creme, who projects a first-round ISU matchup with Bucknell. “I don’t see them getting any higher than that.”

One reason: ISU did what it was expected to do in last week’s Big 12 Tournament: Get to the title game and lose to Baylor. A win over the top-ranked Bears would probably have nudged the Cyclones up to the three-line, but playing them tough wasn’t enough to move the needle.

“I’m largely basing that on, quite honestly, what the committee told us on the last reveal (of top 16 teams),” Creme said. “They had them in that 14-15 spot and nothing has happened since then for them or for some of the teams around them have changed  so dramatically that there would be a big enough swing to get them to 12 overall — except for the jump of Syracuse, and the jump of Miami to some degree.”

Miami, who Creme still pegs as a three, has lost two straight games, albeit to ranked teams, N.C. State (another three seed) and Syracuse (yet another three).

The Cyclones clobbered the Hurricanes at home early this season, but apparently the overall body of work, in the committee’s eyes, favors Mami entering the tournament.

“There was a little bit of a gap, I think, between Iowa State and some of those teams in the 11-12 range overall that would put them in a position to be a three,” Creme said. “And I don’t think they’ve overcome that since then.”

That’s debatable — but moot at this point. Creme did say he expects the Cyclones to begin NCAA play in a favorable destination.

“The way I’m looking at it now, it could end up out West, it could be in Portland, which, wouldn’t necessarily be a bad thing,” he said. “A three might have put them in Chicago, which I think is gonna shape up to be a little bit tougher regional. Portland looks like it might be the softest of the four — and a lot of this is based on geography. There aren’t as many teams in the western part of the country, so generally that West regional, whatever it is, is a little bit easier to navigate, maybe? Not that any of them are easy, but I think that Iowa State might actually benefit from being a four and being out there than if they were a higher seed in a different region.”

Either way, ISU’s poised to make as much noise in the tournament as it has in several years. The Cyclones haven’t reached the second round since the last Sweet 16 season in 2010. They’ve been one and done in six straight appearances, but boast a much more complete team this time around.

“Playing college basketball, you want to get to the NCAA Tournament,” ISU star Bridget Carleton told the Ames Tribune after the loss to Baylor. “That’s what it’s all about. That’s where the best memories are made, so we’re looking forward to that. I can’t wait.” 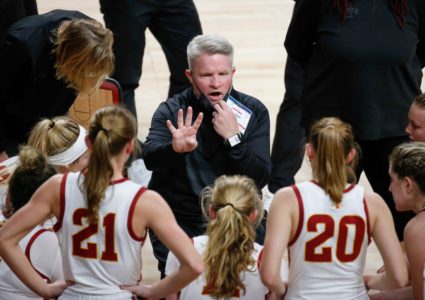