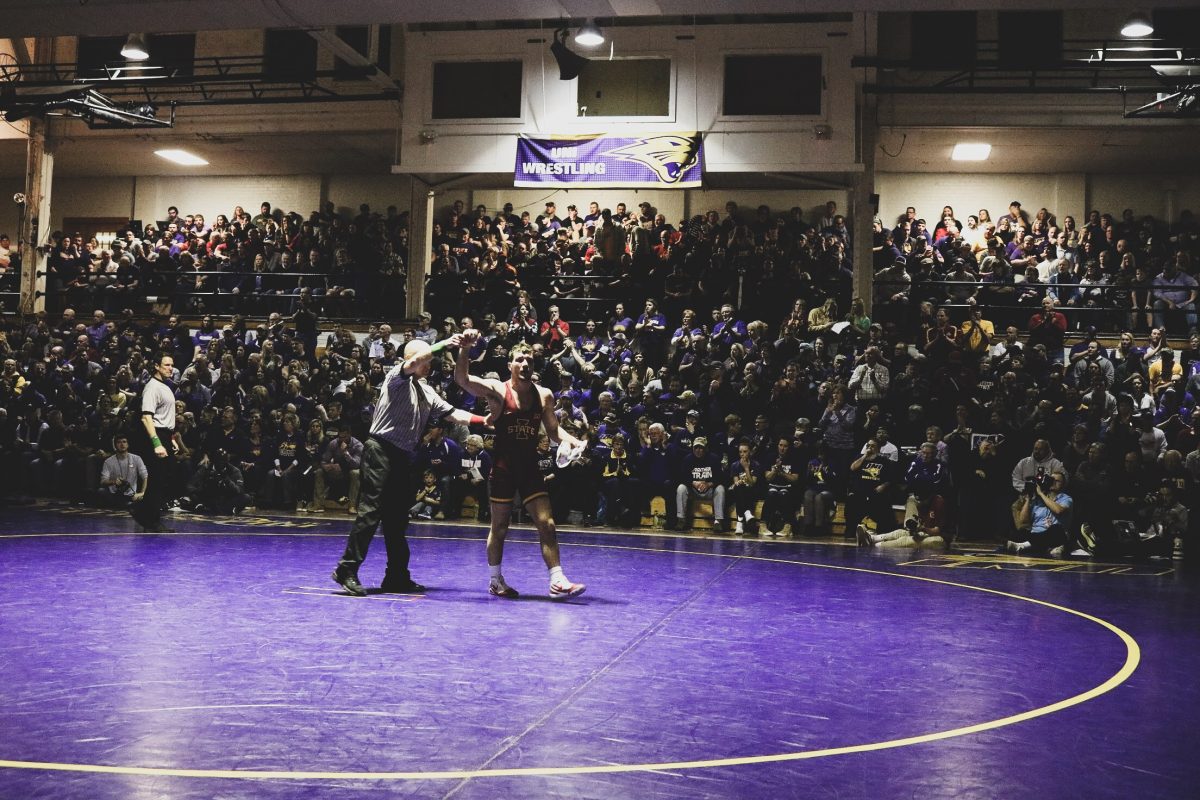 Chase Straw always wanted to be a Cyclone.

When Iowa State hired Kevin Dresser and his staff two years ago, there was no question that the 157-pounder would be staying. He was along for the ride and the culture change.

“I came here for a reason, those guys (former head coach Kevin Jackson and staff) were good coaches but it wasn’t working,” Straw said. “I like those guys a lot, but I was just a big Iowa State fan and I wanted to stay here. The transition was different. It’s hard to explain. It’s just really exciting to be here and be a part of this program.”

Straw is one of four redshirt juniors on Iowa State’s roster. That group has been around the Iowa State wrestling room longer than anyone.

“We’ve seen so many changes to this program but we’re headed in the right direction,” Straw said. “It’s crazy I have one more year left. Hopefully we’re going to finish this season out strong.”

Straw had a slow start to the season that began with three dual losses. For a fan in the stands or a coach in the corner, that can be frustrating.

Following his most recent loss – a 9-7 defeat against Oklahoma – Dresser shared his frustrations in the post-dual press conference.

“He wrestles some third periods in Hilton pretty darn good but it’s always when he’s behind,” Dresser said. “I’ve been a Chase Straw fan but I’m frustrated that he doesn’t go own it more. We’ve been in this situation too much. I just want him to throw it out there and have fun.”

The thing is, not everyone gets the chance to see what Straw is capable in the wrestling room.

“If you come to wrestling practice and watch him there’s not too many guys that can even hang with him,” assistant coach Brent Metcalf said. “Then there’s a disconnect between that and the competition floor. That’s something him and I have worked on and continue to work on.”

Straw is a consistent wrestler in practice. It has always been that way, at least in Straw’s eyes.

Something clicked for the Winthrop native midway through the season. He is now on a five dual win streak. Some wrestlers find this by changing their mindset in the room, training closer with a new staff member or changing their lifestyles outside of the room. For Straw, it was changing nothing.

“There is no special recipe,” Straw said. “Dresser always talks about investing and it’s finally paying off for me for whatever reason.”

When discussing his newfound success, Straw smiled and said there was no reason behind seeing the payout except doing what he knows to do.

Dresser recently said that being tentative was a thing of the past for the Independence High alum.

“It seems like I got a slow start, but it doesn’t really matter how you start it’s how you finish in this sport,” Straw said.

Straw is a laid back guy. He’s not afraid to tell you how it is but also holds onto an easygoing and light personality.

“I think these guys [staff] think I am more complicated than I am. I get a lot of people who say I’m very quiet or I look mad,” Straw said while smiling. “If I have something to say I will but usually I am just taking things in and I like to go with the flow.”

Metcalf and Straw have done individual workouts together since the start of the Dresser Era at Iowa State.

“He has a funny sense of humor but very straight forward,” Metcalf said. “By the end of the year last year is when I felt I was finally connecting with him as far as he knew that I was really there for him.”

For Straw, working with Metcalf has been a great opportunity to continue to grow in his craft and routine.

“I think we know each other well. He can read me better now. Just knowing I can go over and talk to him if something isn’t clicking and he can point it out is good,” Straw said. “He gets on me in practice to go get another takedown if there’s twenty seconds left and train in the wrestling room how you want to be out on the mat. He just adds little techniques and gets in my head.”

Metcalf doesn’t just bring the toughness on Straw, but is able to help bring a good balance of positive energy.

“He brings that hyper, energy,” Straw said. “Dresser is the nervous, ‘Let’s get to weigh-ins an hour early.’ Then you have St. John, who is just chill and doesn’t say anything and then you have the high intensity, ‘let’s wrestle’ from Metcalf. It’s a good balance for me.”

Although Straw has been able to have consistency physically, Metcalf has seen a lot of growth for him in his mentality.

“I don’t know if it’s a belief in himself or a being scared to lose thing. I think through the course of this season some of that has gone away,” Metcalf said. “I don’t think the whole Chase Straw product that we know and see on a day-to-day basis is out there yet but it’s getting a lot closer to that.”

Straw has a 17-9 overall record (9-3 in the Big 12). His losses were all close enough to have been able to be turned in his favor. This is not news to Straw or Metcalf. The redshirt junior knows where his flaws stand.

“The matches that I have lost, it’s only been by a couple of points. It could’ve easily been the other way but I held out and was hoping for a last second takedown, not being in the right position or not getting the last takedown when I am up or sealing it,” Straw said. “There’s a lot of stuff that go into account that maybe in the beginning of the year I wasn’t going out getting it enough.”

Having a coach like Metcalf understand him has been helpful when Straw hits these ruts.

“As a fan and as a coach, he leaves you wanting more sometimes. I don’t think that’s because of lack of his heart or how much he cares about winning or the sport, I think that it’s just a part of wrestling,” Metcalf said. “When you’re out on the stage where it matters it’s hard to replicate what you’re doing. With him, I think it’s just trying a bunch of different angles. How can we do this with your mind to get you as close to your true capability when you’re out there wrestling?”

Although Straw clings to the power of just doing the same thing he’s always done, even he can see that it’s this team’s encouragement that has been a key in confidence building.

“Just them saying, ‘You’re the guy. You can go out and win the Big 12. You can go out and make an impact at the NCAA’s, or you can do all this stuff and nothing is stopping you,'” Straw said. “If you really want it, Dresser always talks about how you have to want to win and I think I really want to win right now. All the training, and all the previous stuff and even the previous staff, has led me up to this point. It’s all looking pretty good.”