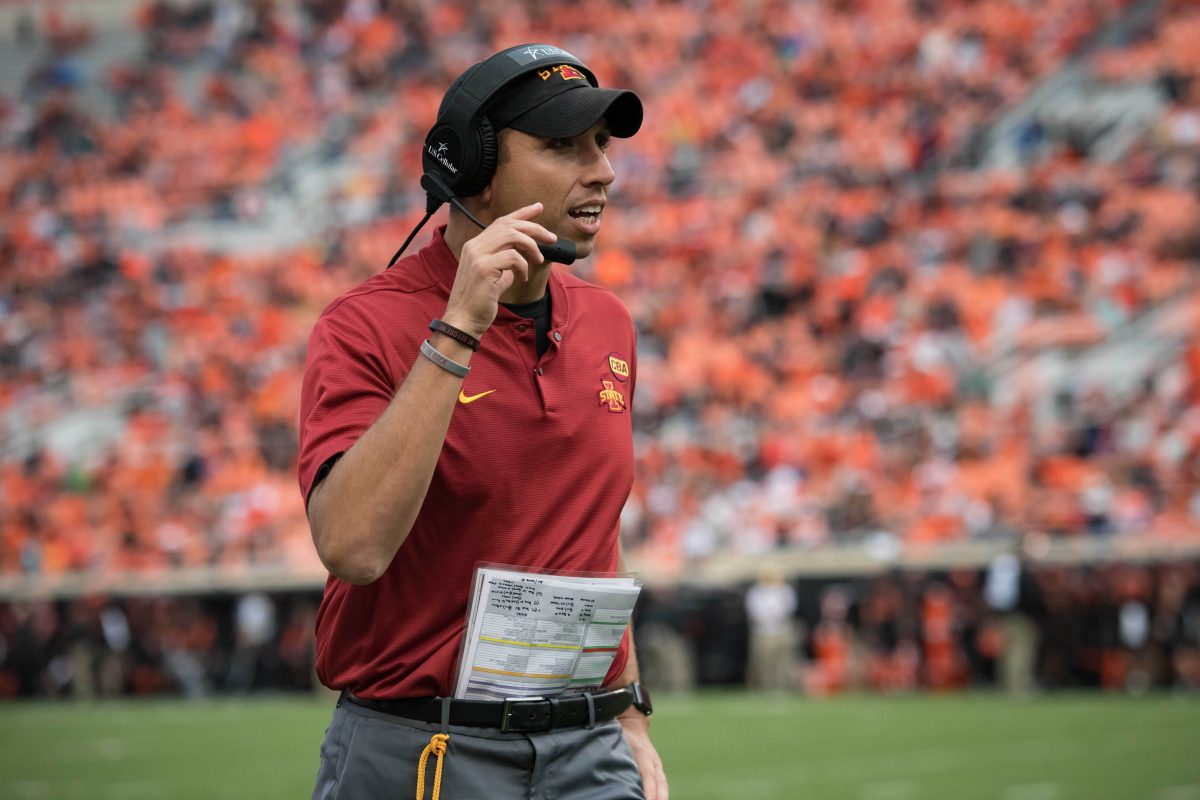 AMES — When Matt Campbell first encountered Iowa State fans — and the school’s tailgating ambience — he felt so impressed, it played a decided role in his decision to leave Toledo and take over the Cyclones’ struggling football program less than two seasons later.

The Rockets lost 37-30 that fateful day in 2014, but the devotion of a fan base that ended the day hoarsely cheering on a 2-5 team stuck with him.

It pops up every time he brings a batch of recruits to highly-charged Hilton Coliseum-based men’s basketball games, where he knows, similar deep, positive impressions are made on would-be Cyclones on official visits.

“Wow” forms a foundation for the simple, yet steely soundtrack for an athletics department-wide synergy, where it’s all hands on deck — and the ongoing effort to build something memorable and venerable never ends, it merely evolves.

“The greatest reward of this whole thing — and it’s why, really, it’s why I love it here, it’s because it literally takes everybody here,” Campbell said during an interview with Cyclone Fanatic earlier this month. “And it’s not any of these coaches. It’s literally everybody’s involvement to make our programs work. It is the ultimate all-in atmosphere. We would have never even been able to start the recruiting process here to get things turned around if it wasn’t for Hilton Coliseum.”

That’s not hyperbole — and it works both ways. Basketball recruits often attend early-season football games and are “wowed” by the intense ambience a committed fanbase creates.

And it’s not just about games. It’s also about buildings and landscapes. Informative academic advisors and helpful administrators. But yes, Hilton always emerges as a major selling point.

“Like, literally, Chase Allen and Jaquan Bailey — I mean, it had an unbelievable impact on guys like that that said yes early on and started this snowball effect,” Campbell said. “Yeah, we use Hilton as much as our game day experiences for when guys come here. I think it’s one of the strongest sells that we have, that you’re coming to a community, a place, where you know what? You are going to get people that are gonna support you and have your best interests at heart, and I think that’s hard to find. I think it’s hard to find in college athletics today and I also think it takes the right person to understand that this culture, when I really say it’s not about you, it’s about everybody, and it’s about the decisions you make impact not only our team but also impacts the people that drive three hours to Hilton every Tuesday night and the people that drive four hours to every home football game on Saturday — it affects those people, too.”

I recall a quote from star ISU hoops alumnus Monte Morris’s mom, Latonia, who before setting foot in Ames decided her son would “never be a Cyclone.”

After she toured the campus and met the people, her tune changed dramatically.

“I absolutely fell in love,” she said.

“So I think the synergy around the entire campus, I mean, it’s a great time to be a Cyclone. Everyone’s rolling in the same direction. Those are the things I think are important to get out here. We are an aligned university right now, between academics and athletics, I think moving forward, and I think it starts a lot with our administration.”

You see it on Twitter. Coach Campbell commending women’s basketball coach Bill Fennelly for a big win. Prohm did the same after Campbell’s team put together a second straight eight-win season in the fall. And the cycle repeats, sport by sport, moment by moment, season by season.

It’s emblematic of a coherent, sharply-defined vision that predates the arrival of coaches such as Prohm and Campbell. It’s a tightly-spun, wide-ranging bond director of athletics Jamie Pollard helped establish more than a decade ago, but now seems to be stronger than ever.

“Obviously, the football team has gotten better and Coach Campbell lit the match when it comes to that, but there was an audience in the stands for him to energize, versus him having to do something to hopefully get people in the stands that will be energized,” Pollard told Cyclone Fanatic during a pre-Alamo Bowl interview earlier this winter. “So I think that all kind of came together and at the same time, I think there were some things happening outside of athletics. The recession hit. More people were staying at home. Because of that, STEM (science, technology, engineering, mathematics) became much more an important thing in our society. Iowa State does a really good job with that, so growth starts to happen in the student body.

“So there were some parallel things. The Tailgate Tour got changed. We went from 40 to 60-year-old males at a country club to families and children and tailgates. So all of that kind of came together. Fred (Hoiberg) and Paul (Rhoads), they played a big part. They were seen as ‘us’ and they got people excited. So there isn’t one thing. It really was kind of the art of it all together. Now Matt’s clearly lit a match and that has ignited some people.”

But this is intended to be a long, controlled burn, not a combustible flash in the pan.

“I think the reason it works so well is because those coaches all truly respect and appreciate each other,” said Voice of the Cyclones John Walters. “And I’m not sure that it’s always that way everywhere. Sometimes there’s some jealousy or some isolation — the feeling of being in a silo and ‘I’m only gonna worry about myself.’ But these guys are sending each other texts all the time, wishing each other well; Tweeting all the time, wishing each other well and it’s genuine. … So you see Hilton Coliseum packed on whatever night — Saturday evening — and you see football recruits in there and, sure, you can’t take them into a full Jack Trice Stadium that day, but you can take them into Hilton Coliseum and they can see 14,000 fans and they can get a feel for what the energy is like in this fan base.

“It’s one thing to say it. It’s another thing to see it. And when they see it in person and they feel that inside Hilton — and then, the coaches do say to them, ‘Now, imagine this times five. That’s what a football game’s gonna feel like.'”

That’s electric. Indoors or out.

So when Prohm was told how Campbell offered up the utmost praise for the full-scale Hilton experience, he chuckled knowingly. Campbell often deflects plaudits and makes it a “we not me” proposition. Prohm shares that sense of humility.

“It says their program probably has a lot to do with Matt Campbell,” Prohm said. “Because he’s a really respected coach and a good friend of mine and a heck of a football coach. But what I think he’s saying, is when you’re bringing in guys and he’s coming here and you talk about him sharing a vision, he’s letting those guys know, ‘Here. Look how passionate this fan base is. Look how special, look how they support you when you win and do things the right way.’ I think that’s what he’s really showing those guys. And that’s the one great thing about Iowa State fans, even look around the country, I told our guys, ‘Man, go turn the TV on during the week and see if all these games are sold out.’

“And even last year — two of our first three years here have been great and this year has been really good, but last year through our struggles, I think our fan base still turned out and they stayed the course with us. I think you can really sell stuff like that, but when he’s starting, really taking over a program he’s got to get energy going and excitement going, he’s got to say, ‘Hey. I can walk you over to Hilton. This is a team that went to the Sweet 16, or won a Big 12 championship, or finished second in the Big 12 and this is how they support you. This is the fan base and this is how passionate they are.”

That takes us back to where it all started: Tailgate lots brimming with pregame excitement, and accented by the aroma of sizzling burgers and succulent, smoked pork. Those lots are even fuller now than they were when Campbell first whispered, ‘Wow,’ thus propelling the ISU revival into high gear.

“He’s been great in recruiting for us to go over there and then they’ll pop over here as well,” Prohm said. “But the fan base here is the number one selling point. That’s what you have to sell at Iowa State. (Football) helps us too and that’s the thing. It helps us too, when you go down, you tailgate, and you’re walking through, and every fan wants a picture, wants an autograph. That’s a big deal and they see that. Now Matt’s just taken it to a really high level where it’s even gonna be better now, but it helps. There’s no question it helps. The success of football is great for us because recruiting weekends are even better now, to bring guys in in early September.”

So that “wow” is (and was) for you, Cyclone fans. And Campbell’s determined to help see to it that more jubilant exclamations will be shouted down the road — around Jack Trice Stadium, Hilton Coliseum, and far-flung arenas and stadiums across the country.

“Those people were here long before we ever put ourselves here and they’re the ones that stayed loyal,” Campbell said. “And to be honest, it’s probably one of the greatest rewards of the (Alamo) Bowl trip. It’s like, man, you can give these people this opportunity to get on this stage and be involved in this. Where else can we take these people — and this culture, that’s given so much to us already?”