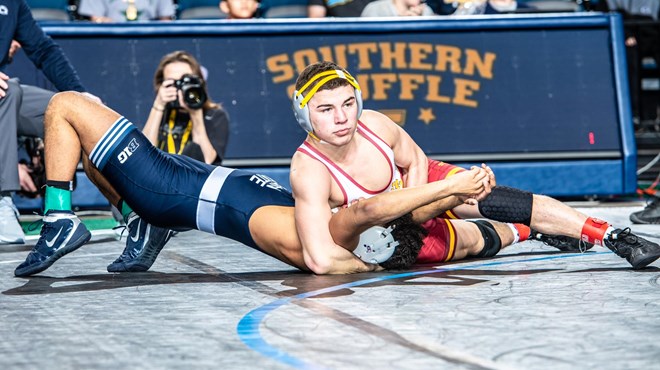 “I think realistically with where we are right now and the field, third was probably the best we could do considering the fire power of Penn State and Oklahoma State,” head coach Kevin Dresser said. “Getting a trophy is a nice thing but we need to get used to getting trophies so that’s a step in the right direction.”

With the third place finish, Iowa State tallied a total of eight medal winners, which included a runner-up finish from redshirt freshman Austin Gomez at 133-pounds.

This might be the first time Dresser has expressed such confidence in the overall performance of the team.

“We competed hard,” Dresser said. “We won some tough matches against good wrestlers and we lost some matches against tough wrestlers. I definitely think it was progress and that’s the goal, to continue to progress.”

The Southern Scuffle is one of the toughest mid-season tournaments in all of college wrestling.

Overall, Iowa State had 16 bonus point wins. Sam Colbray, Austin Gomez, Gannon Gremmel and Jarrett Degen all recorded at least one win by fall during the overall tournament. Degen and Colbray specifically won fifth place by pinning both their guys.

Gomez had an attention grabbing road to the championship round where he finished runner-up against No. 1 Oklahoma State’s Dayton Fix.

In his match-up against Ty Smith from Drexel, the star redshirt freshman was trailing 8-2 but had a stunning comeback when he recorded five takedowns in the third period to go on and win the match 16-15. His match-up against Penn State’s Roman Bravo-Young was just as action packed as he trailed in the first 8-2 but brought it back and went on to pin Bravo-Young.

“There is some technical things Austin will work on,” Dresser said. “The spirit and the effort that he brings is what we want across the board. He’s a great role model/poster boy for what we want to be about.”

If Gomez didn’t have the attention of everybody before the Scuffle, he definitely has it now.

“He’s here to win a national championship,” Dresser said. “He’s pretty narrow minded and I say that in a good way. His focus is as strong as anybody we got on our team right now and it separates him from the pack. His focus is so narrow and that’s what the good ones do.”

What is next for the Cyclones is a midweek road trip to North Dakota State where they will wrestle the Bison on Wednesday, Jan. 9 at 7 p.m.

“We get to go to NDSU in a week and they’re going to be gunning hard for us. They’re a top-25 team and I’m always excited for the next event,” said Dresser.  “I’m excited to see how they respond to being favored a little bit and someone wanting to take your head off on the road and how they respond to that. That’ll be the most exciting for me.”

Willie Miklus who did not compete at the Scuffle due to illness will return to the mat against NDSU. Ian Parker, who suffered from a concussion during the Scuffle, will be a game-time decision leading up to next dual.