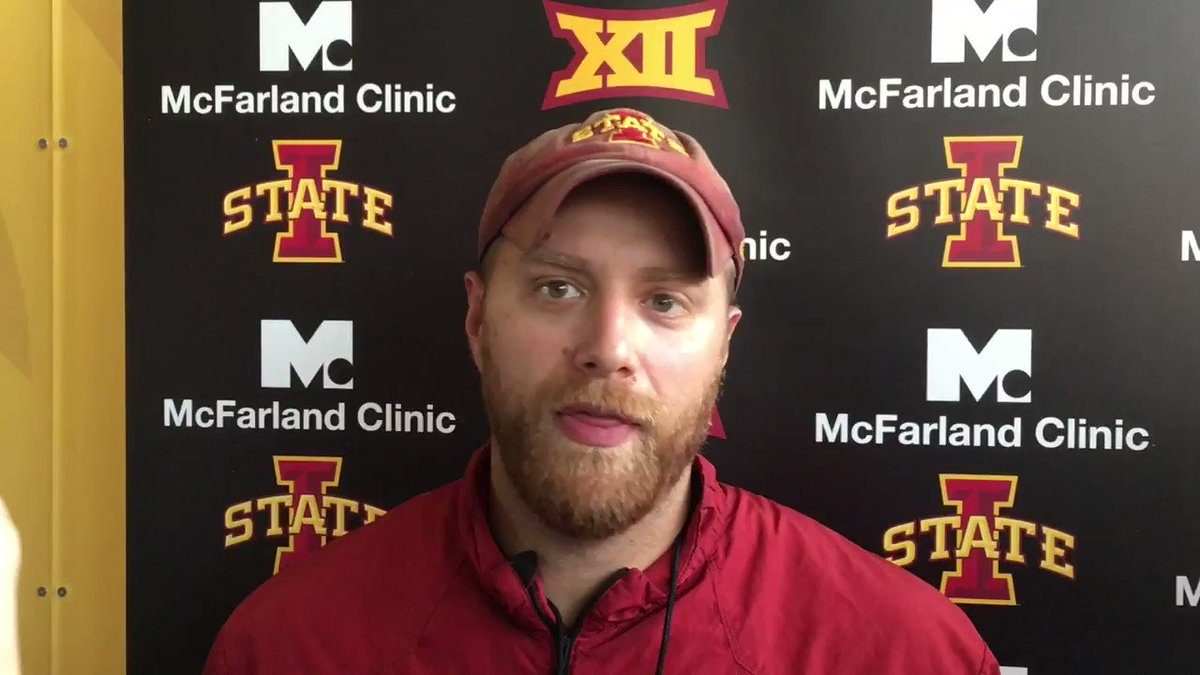 **The following is a news release from Iowa State Athletics Communications**

AMES — Iowa State Head Coach Matt Campbell announced today changes to his coaching staff which includes a familiar name returning to Ames from the professional ranks, his reconnection with a college teammate who has significant Power 5 Conference coaching experience and several promotions, and position group and duty adjustments.

Tom Manning, who coordinated ISU’s offense from 2016-17, will rejoin the Cyclone staff after one year with the Indianapolis Colts.

Campbell has also added Matt Caponi, who most recently directed the defensive backs at West Virginia (2016-18), to work with the secondary. A college teammate of Campbell at Mount Union, Caponi has been a full-time assistant with both the Mountaineers and Arizona previously.

The addition of Manning and Caponi are pending successful background checks.

Nate Scheelhaase, who was Iowa State’s running backs coach in 2018, will shift to wide receivers beginning this spring. He replaces Bryan Gasser, whose contract was not renewed. Quarterbacks coach Joel Gordon has been promoted to passing game coordinator and special teams coach Joe Houston will move to an off the field position.

“I am very excited with the changes we made with our football staff,” Campbell said. “We brought in coaches who are familiar with our program, our league and our culture. I also made some adjustments internally which will better serve our student-athletes.”

Manning was tight ends coach with the Colts last season, helping the team advance to the divisional round of the AFC playoffs and a 10-6 record. Manning was instrumental in tutoring Eric Ebron into a Pro Bowl selection. Ebron was second on the team in receptions (66) and receiving yards (750) and broke the club’s record for touchdown catches by a tight end with 13.

Manning is a former FootballScoop.com Offensive Line Coach of the Year when he was an assistant at Toledo working for Campbell.

“We are thrilled to have Tom return as a valuable member of our staff,” Campbell said. “He is familiar with our program and played a big role in helping establish our culture here. He is an excellent coach and brilliant offensive mind, has been a highly successful play caller and he already has respect within our walls. He did a fantastic job with Indianapolis and we can’t wait to have him back as a Cyclone.”

Caponi, who has 15 years of collegiate coaching experience, is reuniting with Campbell. The two Mount Union graduates were teammates as players and colleagues as coaches at that Division III power. Caponi comes to Ames after serving as defensive backs coach at West Virginia the last three seasons when the Mountaineers were one of the top defensive teams in the Big 12. He coached the safeties at Arizona (2013-15) before going to WVU.

In 2018, Caponi mentored four players who earned All-Big 12 recognition. That list included Kenny Robinson Jr., who was First-Team All-Big 12 after tying for third in the league in interceptions (4) and ranking 14th in tackles (77).

The 2017 Mountaineer defense ranked No. 16 nationally in most defensive three-and-outs per game and No. 24 in best third-down defense. Kyzir White, who was drafted in the fourth round of the NFL Draft by San Diego, was an honorable mention All-American and a Second-Team All-Big 12 pick.

“Matt is a rising star in this profession,” Campbell said. “I’ve watched him grow as a player and coach, and he will be a great asset to our defense. He understands the game, is a hard worker and will have an excellent rapport with our student-athletes. Matt also brings with him an excellent track record of success at the highest level of collegiate football.”

Scheelhaase and Gordon had impressive debut seasons in Ames. Scheelhaase coached a productive group of tailbacks, including All-American David Montgomery. The junior rushed for 1,216 yards, becoming just the eighth Cyclone in school history to record multiple 1,000-yard seasons. Gordon navigated through the loss of a starting QB in the first game and tutored true freshman Brock Purdy through a terrific rookie season. Purdy’s 169.91 QB passing efficiency was sixth nationally.

“I could not have been more impressed with Nate and Joel in their first seasons as full-time assistants at Iowa State,” Campbell said. “They are excellent coaches, superb teachers and understand our process. Each has an outstanding future and our offensive room and our players benefit from their dedication, knowledge and enthusiasm.”