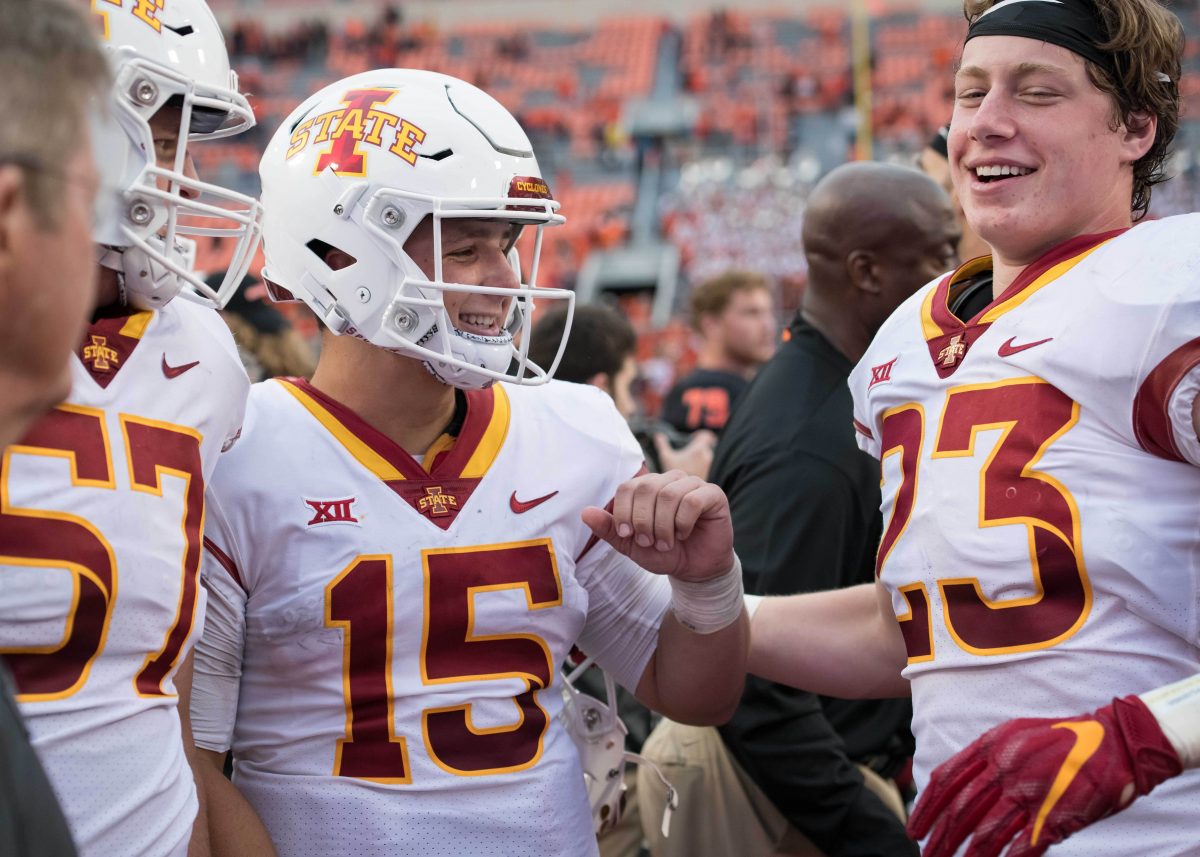 So is his fellow true freshman standout and roommate — MIKE linebacker Mike Rose, but even he would occasionally reach a breaking point during long off-the-field conversations about the game they both love.

“We talk about football all the time,” said Rose, who like Purdy shined like few ISU true freshmen before him at his position during a second-straight 8-5 season. “Sometimes I’ve gotta be like, ‘Yo. Let’s stop talking about football,’ just because — I don’t know. Sometimes when you don’t need to be doing football stuff, you’ve just gotta give your mind a break.”

Seems sensible, but such breaks don’t last long for the fast friends, whose grounded preseason goals mirrored each other’s. Work hard. Be a good teammate. Voraciously pore over film — and maybe, just maybe, see the field.

“My goal was just to work hard and see if I could get on some special teams,” said Rose, a First Team Freshman All-American, according to The Athletic and the Football Writers Association of America. “I kind of looked at it as a good situation. I could kind of do what (fellow linebacker) Jake Hummel did his freshman year. Those were kind of my expectations going into it.”

He then proceeded to obliterate them. Towards the end of fall camp, it became increasingly clear that the hard-hard-hitting but gap-sound Rose would be called upon for more than special teams duty in Coach Matt Campbell’s rising team. Campbell called Rose — who had precisely one power five offer — into his office before the season-opener and told him as much.

Rose’s reaction? Great. Now how to make the most if the opportunity?

“Honestly, I was just like, ‘I’ve gotta prove myself,’” the Brecksville, Ohio, native, said. “They offered me late. This was my only power five (offer), so I kind of surprised myself, but then again, you have that confidence in yourself, too. I always knew I could play at this level, so it wasn’t like I was astonished. But yeah, a little surprising.”

Purdy’s recruitment was vastly different. He owned offers from Alabama and a slew of other top-tier schools besides ISU, but liked what Campbell and his staff had to offer, and swiftly settled this summer into life in Ames.

Where Purdy would match Rose, though, is earning playing time.

He was told he’d likely get his first series of snaps in what turned into a rushing debut in a 49-42 win at No. 25 Oklahoma State, but it was unclear what would happen from there — until Purdy flashed his dual-threat abilities, of course.

“I just wanted to be ready incase of injury our whatever,” said Purdy, ESPN’s Big 12 True Freshman of the Year. “Coming in in the summer and being in the film room right then and there — just getting to know the guys was huge. It wasn’t easy. I can tell you that. I think I prepared myself well enough to do what I did in the fall.”

Part of that preparation occurred with Rose alongside. Both often stayed late after practice to study film and talk shop with teammates. Those conversations carried over into their shared living quarters, and helped forge a bond that’s become iron-clad.

“It was special because fall camp came, we found out we were roommates and we were both experiencing the same things through fall camp — trying to come in and have an impact on the team and stuff,” said Purdy, who in less than one season is tied for fourth all-time in QB wins over conference foes with six. “So just to pick each others’ brains every night was huge and obviously we’ve created a great friendship ever since.”

The chemistry is real, so much so, that the high-performing duo’s offseason goals track perfectly alongside one another just as their pre-rookie season ones did.

What does Purdy need to work on the most?

“Everything,” the budding star said.

“I’ve got to get faster, stronger — everything,” the 6-3, 228-pounder said. “This is gonna be a big offseason for me because winters are usually big for players. This is my first winter here, so hopefully I can just elevate my game even more, which I feel like I can do, for sure.”

They’ll do it together. By talking, but more importantly, doing. Their mirror-image goals now become markedly more ambitious, but the habits that curried past success remain the same.

“Working hard and you’ve really got to put your all into it,” Rose said when asked about the biggest lesson he learned this season. “There’s no half in. Just film, taking care of your body — which you don’t really do a lot in high school, eat well. All the resources they have here, you’ve just gotta use them and you’ve gotta be all in.”