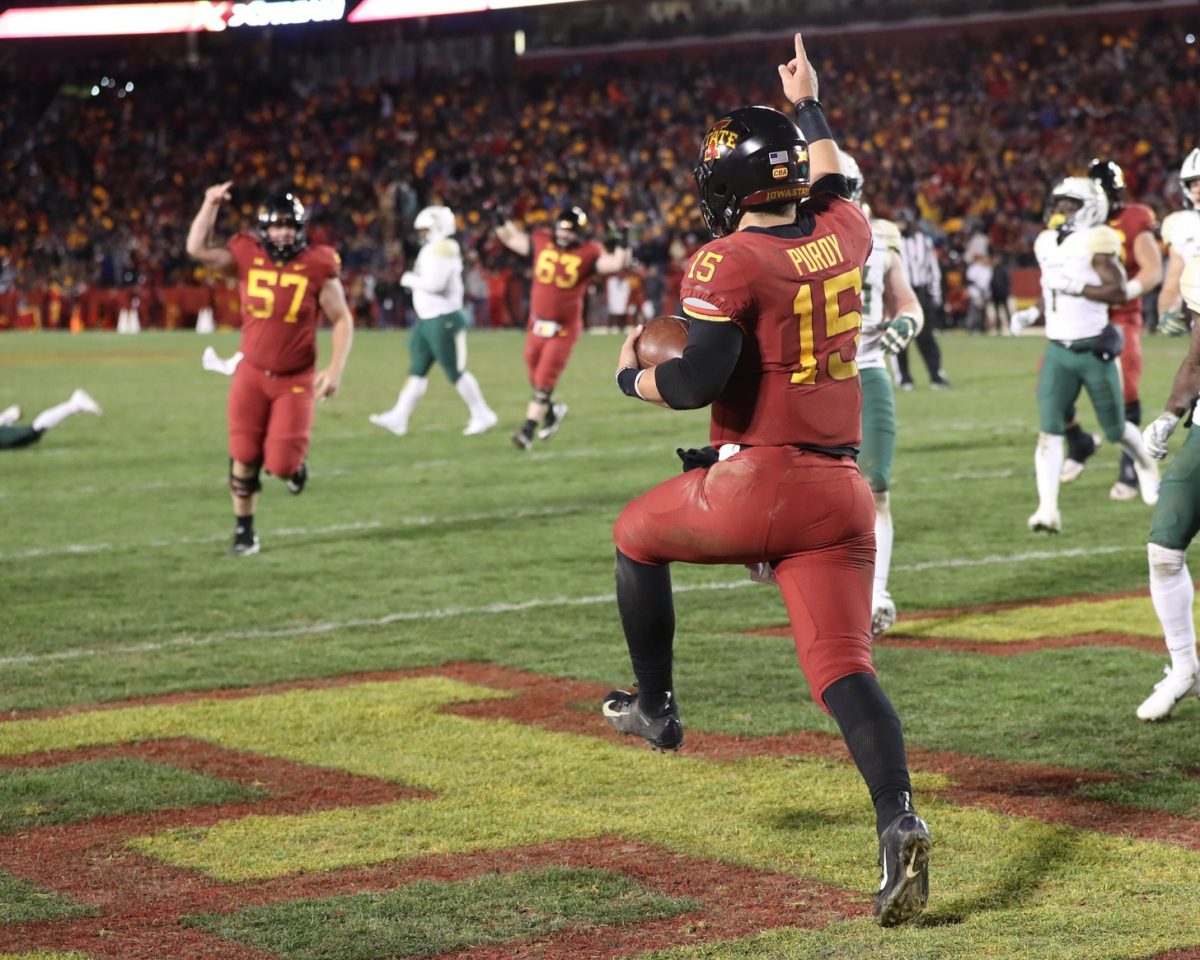 His top receiver, Hakeem Butler, chatted him up.

“I told Brock on the field, ‘You’re controlling the game incredibly,’ Butler said after the Cyclones’ 28-14 melee-marred win over Baylor Saturday at Jack Trice Stadium. “‘Keep working,’ I said. I asked him, “Are you having fun?’ He’s like, ‘Are you serious?’ ‘Yeah, are you having fun right now on the field?’ ‘Yeah, man.’”

He also added a caveat because, after all, nobody’s perfect — not even his head-turning true freshman playcaller.

“I thought he was incredible tonight,” Campbell said of Purdy. “He was magnificent in at least the first three quarters of the game. If you’re going to be harsh, the only harshness I would have is on that third down play that he should’ve thrown away and ended up taking a sack (early in the fourth quarter). Other than that, I thought his poise was tremendous and he was spot on. We needed that and he certainly delivered.”

Deshaunte Jones' 32nd game in a row with a catch & this one good for the TD! pic.twitter.com/d4LZyoTjfO

Purdy drove the Cyclones to score on their first three possessions — and five of their first six.

The first ended in an 11-yard tightly-fit touchdown pass to Deshaunte Jones, who nimbly tapped his toe before exiting the back of the end zone to put ISU up 7-0.

“He threw a great ball and for him to be able to throw that — and I was kind of aware of where I was out on the field,” said Jones, who caught at least one pass in his 32nd consecutive game, which ranks second all-time at ISU. “I managed to get one foot down and I’m happy about that.”

Purdy strolled in from two yards out on the next drive, putting the Cyclones ahead, 14-0.

He also used his feet to convert two third and longs — and caught his first two-point conversion on a trick play from Jones to help seal the win in the second half.

“His mobility has changed this offense,” said Butler, who was kept out of the end zone for the first time since Sept. 29. “It’s added another dimension that people have to worry about.”

Purdy finished 18 of 23 through the air for 230 yards and the touchdown to Jones.

He also led the Cyclones in rushing with 56 yards in 12 carries, a total hurt by that one “harsh” sack.

“It’s nice, because he keeps a play alive and we have a lot of playmakers on the offense that he can try to get (the ball) to,” offensive lineman Josh Knipfel said. “It helps us out. There’s sometimes when pass pro gets called and there might be six coming and there’s only five to block. That’s just how football rolls sometimes and it’s nice. He brings a different effect to our offense.”

Baylor (5-5, 3-4) never got closer that 13 points from tying the game despite amassing 505 yards of offense — the second-highest total ISU’s league-best defense has yielded this season.

The Bears six of 15 third down chances and three of five on fourth, but scored just two touchdowns in seven red zone trips.

“From the coverage aspect of it to getting pressure on their quarterback, we struggled to sustain any consistency tonight,” Campbell said. “We’ll have to evaluate that aspect of it. I thought early on, it worked — the bend but don’t break. Our red zone defense was the difference in the first half. We never got into a great rhythm in the entire game.”

Unlike Purdy and the offense, which didn’t amass eye-popping yardage totals, but proved efficient on the scoring front — with just enough big plays to keep the lead padded.

“He’s poised,” Knipfel said. “When he goes out there, I don’t think he seems too stressful about anything. He’s confident in what he’s doing and he’s confident in the offensive line, wide receivers, running backs. It doesn’t matter who it is on the team, he’s confident with them. I thin that’s one of the best things that he brings, kind of this confidence and trust into everybody.”

Campbell was asked about dusting off the trick play that turned into Purdy’s two-point conversion catch from Jones.

“Oh, man,” Campbell said. “That’s been cooking for a while. If you need two-point conversion plays, I guess we’ve got ‘em. That was a good one.”

It’s a time-honored play, which Campbell fully added to the reportoire after watching his favorite NFL team execute it perfectly early this season.

“I don’t even know where we got it, but like you said, it’s been used by a lot of different people,” Campbell said. ” I’ll be honest with you, probably Baker Mayfield scored on it in the first game of the season, or second game of the season — whatever the Thursday night game was and I was sitting at home watching. I think it’s where we kind of penciled that and said we’ve got to keep that in our back pocket. At least we executed it and it was great to see us be able to get positive points off of that.”

Jones is now one-for-one on such throws.

“(My arm’s) a little rusty from high school but I can get the job done,” the former prep quarterback said.

The Cyclones have never won six straight conference win in any time span, but have a chance to do that next Saturday at Texas. They’ve won five consecutive over two seasons twice before, (1960-61, 1978-79), but never in a single season — until Saturday. … Matt Eaton‘s 38-yard catch in the second half was a career-long. He also totalled a career-best 61 receiving yards. … Purdy has 13 touchdown passes this season to just two interceptions. 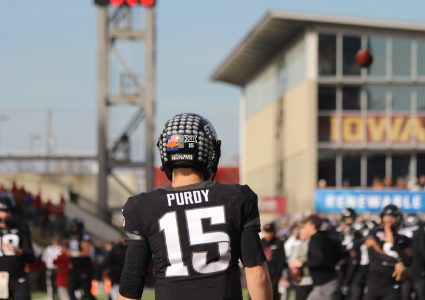