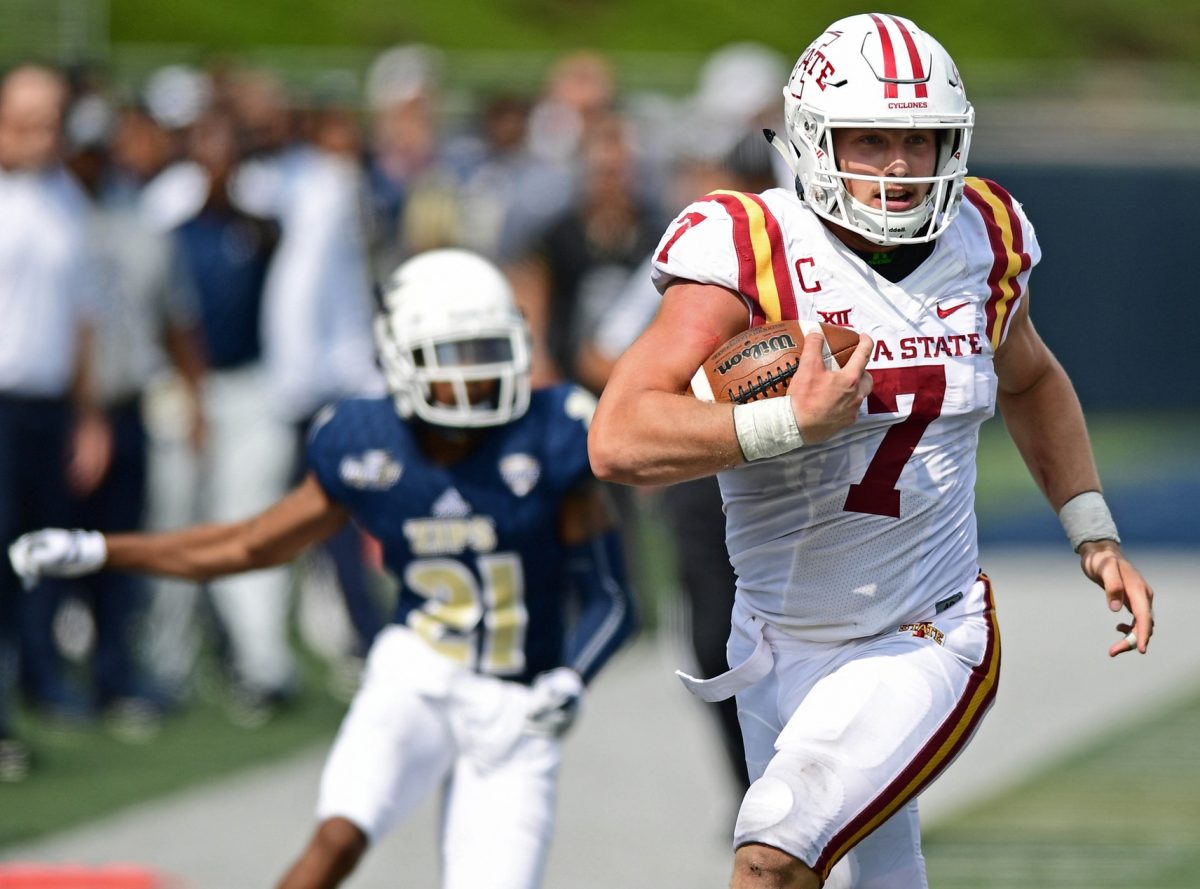 The former Iowa State star earned an award from the Ankeny Booster Club tonight and a great friend welcomed him from afar via a video message — and eased the nerves that had affected him on the final day of the 2018 NFL Draft.

“It was a pretty stressful day, I should say,” said Lanning, who will join the Dallas Cowboys as an undrafted free agent linebacker and who knows what else, given his track record. “Figuring out what I was doing for my future a little bit and then accepting that award and having family and friends there, it was awesome.”

But it meant more than that. One of Lanning’s best friends, Wil Simpkins, is a U.S. Marine.

And he’s the one who provided the video introduction to Lanning before he received his local award.

“It was kind of stressful a little bit, because I knew I had to go up there and give a little speech or whatever,” said Lanning, who was named a first team All-American as a senior by the Football Writers Association of America. “And, you know, one of my buddies is in the Marines and I didn’t know about it, but he made a little intro video before I accepted my award, talking about me. I kind of lost it there. I obviously miss the guy a lot and I’ve know the kid since I was five years old, so it’s been an emotional day and everything just kind of let go at that point.”

Kind of puts draft day into perspective, don’t you think?

Lanning spent the day wondering if he might be selected. His good friend and teammate, record-setting wide receiver Allen Lazard, fully expected to be picked, but inexplicably wasn’t.

Lanning said he thought Lazard would handle the momentary setback well, as winners often do.

“Things happen for a reason,” Lanning said. “He might be better off in this situation and nothing to worry about with him. He’s going to go and compete and he’ll do just fine. It’s better for him to go free agent than for him to be drafted late.”

The same holds true for Lanning, who’s unsurprisingly extremely excited to take this next step.

To compete. To counter doubters. To blaze new ground as a quarterback-turned-linebacker — and whatever else may come.

“It’s pretty crazy, honestly,” Lanning said. “It happened so fast … I didn’t realize I was a Dallas Cowboy and its kind of hitting me right now. Enjoying the moment a little bit with some family and friends and I can’t wait to get to work.”

It’s the best kind of work, too. A dream job interview framed by blood, sweat and … more blood and sweat. Lanning’s proven he’s highly adaptable at ISU. Now he reckons to do it at the next level — with fellow Cyclone UDFA’s Jake Campos and Marchie Murdock at his side.

“They called me right away,” Lanning said. “I was back and forth with my agent trying to work out deals and stuff and they called me — the linebackers coach called me and pretty much said what they like about me and what they see. Obviously, I’m going to have to find my way onto special teams at first, and that’s what he said. They’ll work me in at MIKE and WILL and just, kind of, they were the best option for me at the time with their depth chart and things like that, so I just had to go with them.”

The dream has new hope. It’s approaching the ultimate level. Lanning’s ready to tackle it — hard.

“I don’t leave until the 11th, so I’m going to work out here and do some things,” Lanning said. “When you get down there, you’ve just got to go to work. Do whatever they ask you to do. Kind of have fun meeting all the guys and, uh, I mean, live the dream now.”