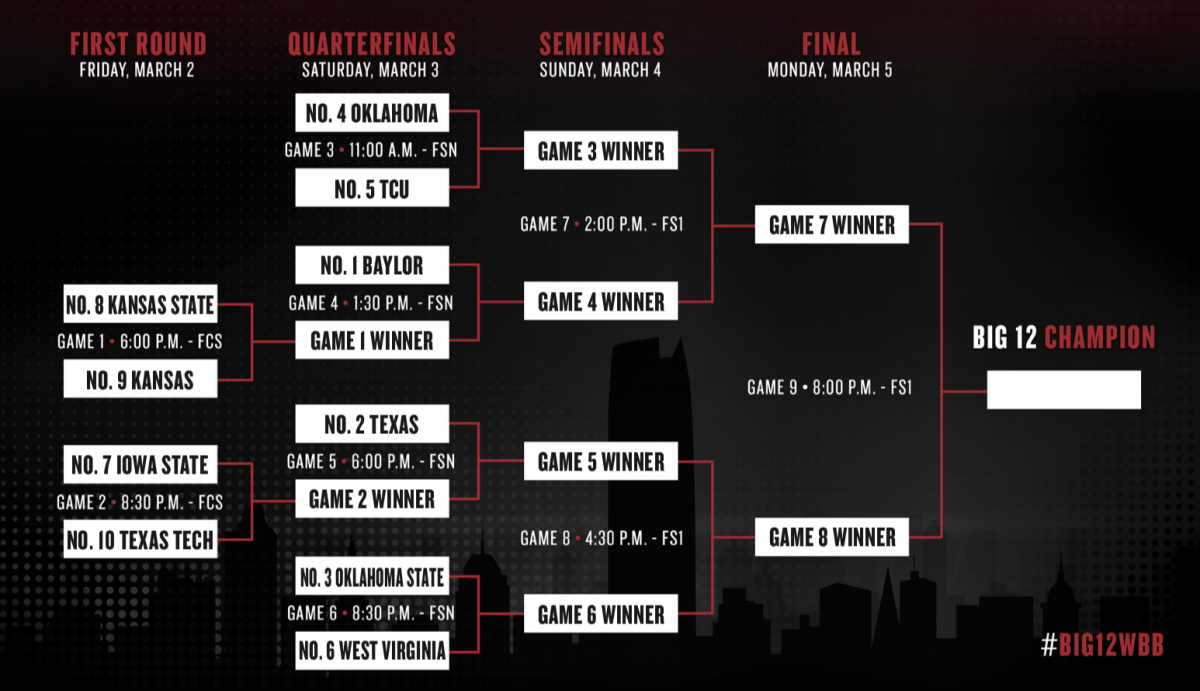 AMES — After being chosen as a unanimous selection to the All Big First 12 team, junior Bridget Carleton shrugged off what she called a “cool”’ accomplishment when talking to the media Wednesday afternoon. Bridget’s focus, as well as the rest of the team, is on their matchup against the 10th seeded Texas Tech Lady Raiders (7-22, 1-17) tonight at the Chesapeake Energy Arena in Oklahoma (8:30 P.M. on FCS).

Iowa State (13-16, 7-11) is looking for its third straight win against the Lady Raiders this season. Coming off a 65-56 win over Kansas earlier this week, head coach Bill Fennelly has his squad playing its best basketball of the season at the perfect time.

The Cyclones, however, haven’t won a postseason game since 2013 when they put together an impressive Big 12 Tournament run that ended at the hands of Baylor in the Championship game. There isn’t a Cyclone on this roster that played in that game.

“When you lose your first game, you almost feel like you weren’t even in the tournament, in a weird way,” Fennelly said. “There will be two teams going home before some teams even get there.”

Carleton mentioned how both the lack of postseason success, combined with wanting to keep the careers of Claire Ricketts and Emily Durr alive, is more than enough motivation than this team needs. Durr, who has lost her past three Big 12 tournament games, says there’s no added pressure heading into tonight’s contest.

“I think just have fun, and play hard like always, have energy, have enthusiasm, enjoy wearing the Iowa State uniform,” said Durr, who dropped in a career-high 27 points in her last regular season game against Kansas.

While she joked that her dad was unhappy with a 60 percent clip from the free-throw line, Durr’s final regular season outing was the epitome of what Fennelly preaches to this young team. Considering Kansas’ gameplan to double-team Carleton, Durr showed her ability to put up points when her number was called, something that Fennelly hopes to see from the Iowa State bench, rather than the Texas Tech one.

“The thing you always worry about in these tournaments is someone who hasn’t done it all year surprises you, or someone who’s averaging three or four points a game all of a sudden rises up and has the game of their life,” Fennelly said. “Those are the exciting things about this tournament, but also the things you worry about.”

Below is the bracket for the tournament.

Winner of each Semifinals game

If Iowa State is able to get the job done against Texas Tech, they’ll move on to face the Texas Longhorns, who beat Iowa State 72-59 last Saturday in Ames. A tough matchup, but Fennelly has faced plenty of those the past few seasons.

“To me, when you get into the postseason, unless it’s a matchup that’s ridiculously bad for you, the number to the left of your name is what color jersey you wear,” said Fennelly.

Of course, the primary goal for this young group is to gain as much experience as possible, and that starts with a win over Texas Tech, tonight in Oklahoma.

WBB: Iowa State has a big week in front of it