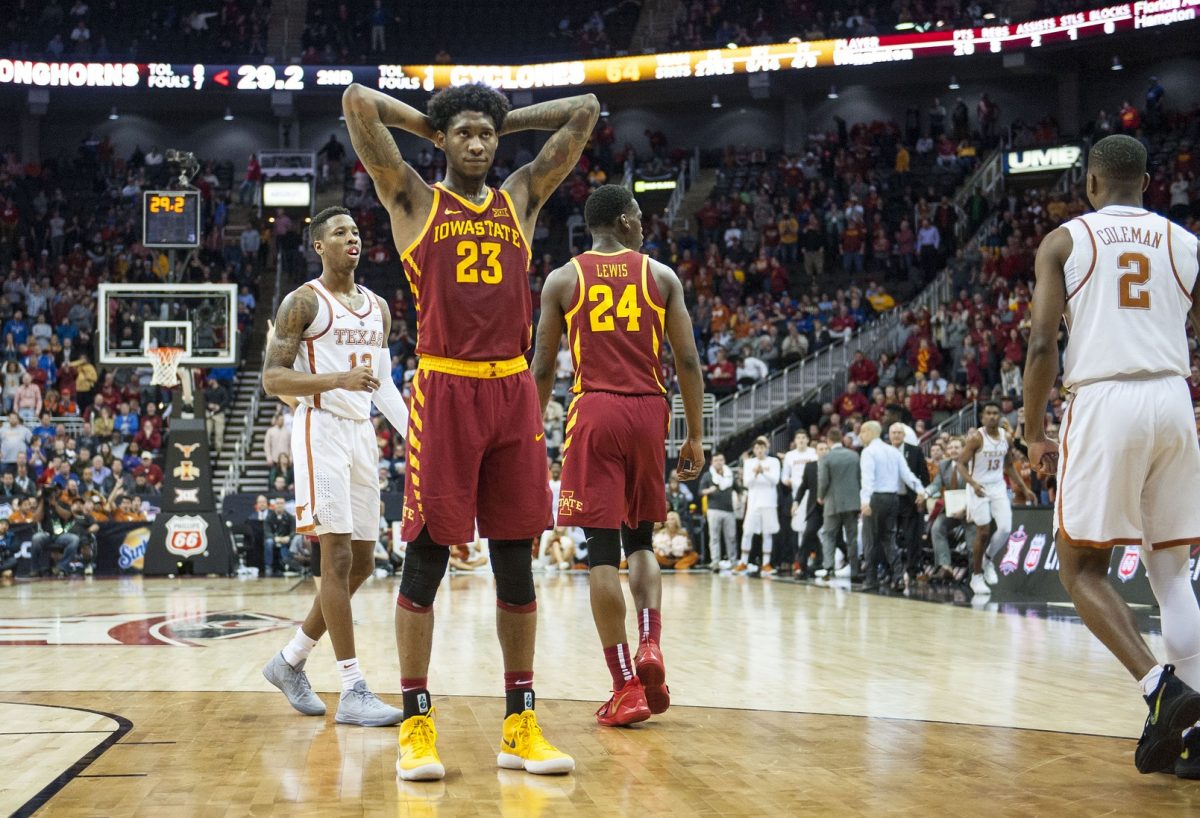 Mar 7, 2018; Kansas City, MO, United States; Iowa State Cyclones forward Zoran Talley Jr. (23) reacts after a turnover against the Texas Longhorns in the second half during the first round of the Big 12 Tournament at Sprint Center. Mandatory Credit: Amy Kontras-USA TODAY Sports

KANSAS CITY — Steve Prohm knows this Iowa State men’s basketball season was unacceptable. The Cyclones’ third-year head coach understands the year capped by a 68-64 loss to Texas on Wednesday at the Big 12 Tournament cannot become the norm in Ames.

“I just didn’t do a good enough job,” Prohm said. “Bottom line about the whole season it’s just unacceptable. It’s sickening. We’ve got to get to work. We’ve got understand what we’ve got to do to get better. At the end of the day, I just wasn’t able to get everybody playing the right way for the right reasons for 40 minutes and that’s the toughest thing to say.”

Sloppy turnovers, lazy defense, unfocused play out of the locker room — all staples of an Iowa State team that lost seven straight games to close the 2017-18 season. All of that was present Wednesday night at the Sprint Center.

It was accompanied by an impressive offensive performance from the team’s star freshman, solid contributions from the graduate transfer junior who came on near the end of the year and plenty of glimpses at what figures to be a bright future for Iowa State basketball.

Those things were not enough to keep this Iowa State team’s season alive, but that does not mean they can’t make you feel good about where things are heading.

“What the team could be and what they have the possibility of being next year if everyone buys in is unbelievable. It’s just about buying in and giving everything you’ve got,” said senior forward Hans Brase, a guy who spent one year in the program and already holds a degree from an Ivy League school. “It’s a talented, talented group. Everyone likes being around one another. It’s just at this level it’s all about buy-in. Buying into coach’s plan, buying into team success over individual success. Any team in life, basketball, business, the most successful teams are the ones that don’t care who gets the accolades. They just want the team to win.”

It is too bad Brase never got more of an opportunity to show what he was capable of doing on the basketball court. He arrived in Ames two knee surgeries too late to make a major on-court contribution, but if his post-game mood on Wednesday was any indication, he gave everything he had to Iowa State basketball in his final collegiate season.

I’m willing to bet freshmen Lindell Wigginton (20 points on 8-of-15 shooting with eight rebounds and nine turnovers) and Cameron Lard (14 points and five rebounds) would tell you Brase made an impact on them.  Brase’s comments are nearly identical to the ones fired out by Wigginton after the team’s regular-season ending loss last week.

Brase was a model for what it means to be a leader in the locker room — and that’s despite barely being able to play and not knowing anyone on the team at this time last year.

That was why it really struck me when Brase brought up the bright future for this program completely unprompted. I wanted to know what he would remember most about his time at Iowa State, but he gave me the thing I’ll probably end up remembering most about him.

Hans Brase, a Princeton graduate and now forever a Cyclone, sees the same thing all the rest of us do. He sees a bright future ahead for Iowa State basketball.

This isn’t the way we’re used to walking away from Hilton South, but if we’re all right about the future — if Hans is right — we won’t be feeling this way for long.

But it is going to take some buy-in.

“Once this group figures that out,” Brase said. “No telling what they can do.”