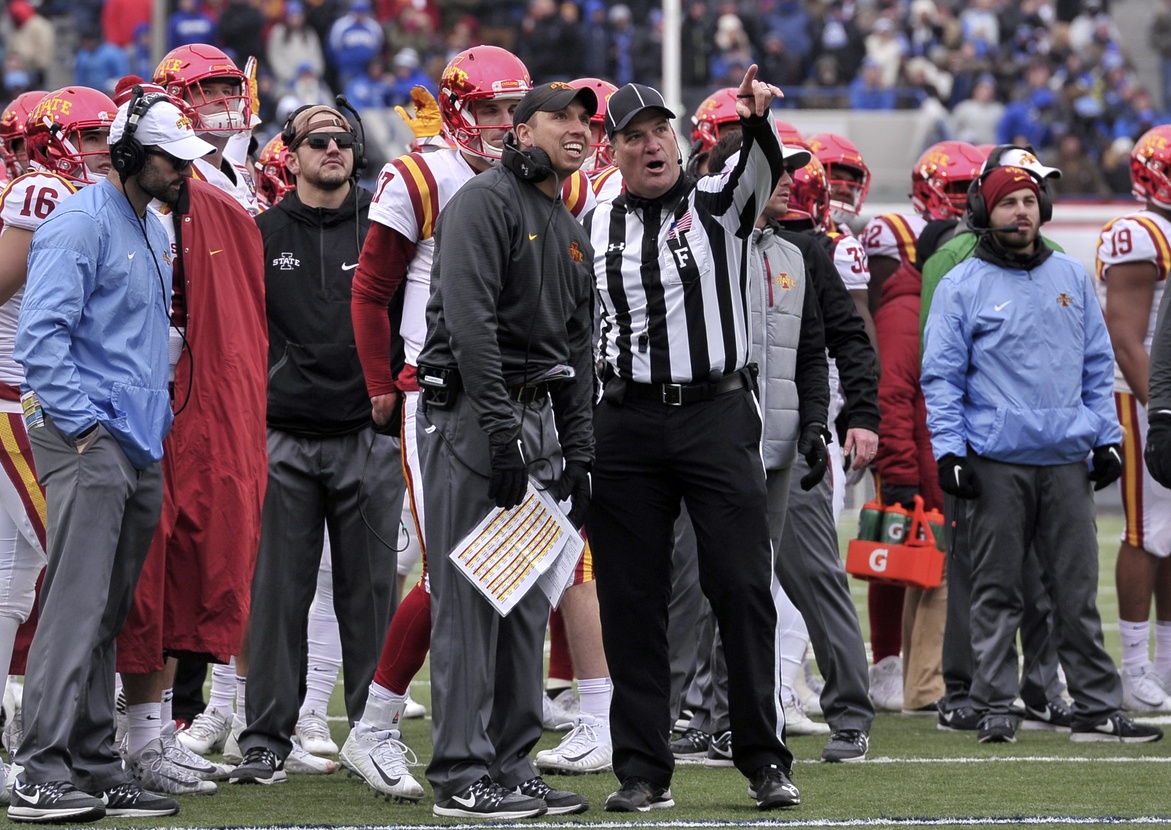 Answer: “I think the biggest thing I’m looking for is, is …” Campbell began in Wednesday’s National Signing Day press conference.

Then the Cyclones’ coach paused and chuckled briefly, keenly aware that it’s at this point where some eyes begin to roll.

“It’s so cliche, but the character piece of it, right?” Campbell continued, undeterred. “To me that’s so evident in terms of will that guy ever reach his full potential or not. How he carries himself. How he acts. How he treats people. That’s why I think the credit goes to our assistant coaches. We’ve cut the ego out of recruiting in a lot of ways in our own staff room.”

Matt Campbell talks about Joseph Scates and Tayvonn Kyle then the impact of the early signing period on the recruiting cycle in this CFTV. pic.twitter.com/dKT6QTk55U

No ego. All for one, one for all. To some, that’s a tired platitude, or a wistful pipe dream.

For Campbell and his staff, it serves as the foundation for a multi-tiered recruiting philosophy that’s been extremely effective — as evidenced by ISU’s recent breakthrough 8-5 season and the completion of a Class of 2018 that is the program’s best ever, according to 247Sports’ composite rankings.

“There’s no ego whatsoever on this team,” said touted JUCO safety Greg Eisworth, who signed early and has been shivering on campus since early January. “And I think, like Campbell talks about it, is we don’t have (a lot of) the four and five-star players, but we play like it on the weekends. That’s what matters and that’s because we all collectively buy in as a group.”

JUCO transfer safety Greg Eisworth talks about his transition to Iowa State in this CFTV. pic.twitter.com/lIQPSVztHG

Eye-rollers beware. These cliches can be powerful because, frankly, they stand for something.

It’s a formula Campbell’s hacked, tweaked and almost perfected — and it’s why ISU’s program remains on a lofty trajectory that defies talk of ceilings or limitations.

“It’s so much easier when you’ve been together — and some of these guys have been together eight, nine years,” said recruiting coordinator and tight ends coach Alex Golesh, who also joined our Chris Williams for an illuminating podcast on signing day. “I’ve been with them now going on year six. I think as you have continuity on the staff, honestly you know what guys are good at and what guys aren’t good at. So you know when there’s genuine investment in the head football coach and the university, that it’s not just guys — we have a unique environment here where it’s not just guys trying to sign as many guys as they can or, ‘Look at what I did.’ This staff, we team recruit probably more than I’ve ever seen. And it’s a cliche quote, but it’s amazing what you can get done when no one cares who gets the credit. That’s the ultimate.

“Coach Campbell recruits harder than anybody and you trust everybody in the room because you’ve been with them. You know what they’re good at, you know what they’re not. And when guys aren’t good at something they’ll ask for help, so I think continuity is what allows you, one, not just evaluate kids faster and communicate faster, it allows you to have a trust factor where you know everybody’s looking out for each other and making sure we’re getting the right guys that fit us.”

Another cliche mention, another powerful passage. Credit comes when unheralded players such as Kyle Kempt get a chance to shine and exceed expectations. Pride hinges on forecasting and preparing a bright future future for a raw, promising recruit two years before he even commits and signs on to the program.

“This is the first year where I felt like we had a real full cycle to recruit these guys,” Golesh said. “You look at guys like Trevor Downing and guys like Re-Al Mitchell, Joey Ramos — those are guys we offered two years ago. And you go down the list, there’s a ton of them that we offered two years ago and this is the first time we’ve actually had a chance to recruit them through a full cycle, build real relationships and, so absolutely critical that we’ve had two years to do it. I feel like we’re caught up now in terms of knowing, not just the kids, but really the areas, the high school coaches, because, no lie, Iowa was new to a lot of us. St. Louis was new to a lot of us. Kansas City’s new to a lot of us. Texas is new to a bunch of guys on this staff. Southern California is new to a bunch of guys. So it’s just even, who do (talk to) to find out about a kid in an area? All those little things on top of getting to know the kids and their families, so this is the first time we’re two years and with three months in, this is the first time we feel like we’ve gotten not a grasp, but at least on an even playing field with everybody else that’s been stable as a staff.”

Campbell joked that having an early signing day this year allowed him to dispense with the player-by-player breakdown of “how good” they would be, and talking up the class in general.

Matt Campbell on who can make an instant impact in Iowa State’s class and how the early enrollees have impressed so far in this CFTV. pic.twitter.com/ZiHiDQMRAo

It also allowed him and his staff to form a full-court press on the final three recruits — wide receivers Joseph Scates and Tayvonn Kyle, and quarterback Brock Purdy.

Scates is a four-star recruit from Dayton. Kyle was first-team all-state in Georgia. Purdy was Arizona’s Gatorade Player of the year — and held offers from Texas A&M and Alabama, among others.

“I think Joseph, his story’s incredible when you really dig in there — what he’s been able to do and what circumstances he’s been able to get out of and make something of,” Campbell said. “It’s like, ‘Man, I want that guy on my team.’ And I think it’s that character piece that you’re able to identify and relate to and say, man, ‘I want to stick to that guy. I want that guy to be a part of us.’ I think Brock’s the same situation. Brock Purdy — the football part’s really cool. But you know what’s really cool about Brock Purdy? It’s who he is. What he stands for. What he’s about. Everybody in the community’s raving about him. Those are things that, to me, as a head coach, I want those guys, because I know those guys, when things get really hard, they’re going to dig in and buy into you rather than go the other way. I think that’s probably where my growth has come from a young coach to being an older coach at this point, it’s really understanding that. It’s a balancing act in a lot of ways, but that part I really like.”

It boils down to trust, which trumps any amount of stars next to a players’ name. And it ties into the “character piece,” laying waste to the cliche alert that often accompanies its mere mention.

Rankings come and go, but relationships grow stronger over time.

“I think what I’ve grown to love more, Iowa State’s taught me in a lot of ways, how to recruit better and learn to love it more,” Campbell said. “Number one, as the head coach, it’s my responsibility to create relationships with these young men because at the end of the day, tough days are going to hit. And if the head coach, when those tough days come, there’s not a relationship with, I think it can be a real failure opportunity for you as a head football coach. We’ve got a lot of jobs and we wear a lot of hats, but at the end of it, it’s still about kids and it’s still about giving young men the opportunity to grow up to be great men. So I love the opportunity to find out what makes these young guys tick through this process. What value do they bring to our program and when those tough days come, can I help that young man get to reach his full potential somewhere down the line? That’s the greatest thing I love about my job and what I get to do.

“And I think what Iowa State’s done for me, I think as a young coach sometimes it becomes about, ‘Man, who was recruiting that guy?’ What star is he? What’s this?’ The reality for it is none of that means anything. And I always thought that, but probably as a young guy you get caught up in what some of these things say and tell you it’s supposed to look like and feel like. Even with our success this year, it’s allowed us to really stay true to who we are. Not try to say, ‘OK, well, this happened. Now I’ve got to go get this guy, or this guy.’ No. Let’s just go get the right guy that fits who we are and what we’re about. I think it’s even allowed me to continue to firm my philosophy of what I really believe recruiting needs to look like and really the standard it needs to be in our program.”

Matt Campbell talks about the depth Iowa State has built in its quarterback room and the addition of Brock Purdy in this CFTV. pic.twitter.com/v25nnZHTxN

Yes, this is Iowa State’s “greatest recruiting class” based on 247’s composite rankings, but Campbell and his cohorts base success on different measures: Development, retention, increased competition, collective character.

That’s why Wednesday capped a happy several months for them. Now it’s back to work, amplifying their vision, while steering clear of the “hype train.”

“I appreciate what it means to a young man to be recruited and earn a Division I scholarship,” Campbell said. “It’s a powerful moment in a young man’s life. What he does with that opportunity is what’s really powerful, right?”

CFTV: Matt Campbell on what makes this year’s recruiting class standout beyond its rating