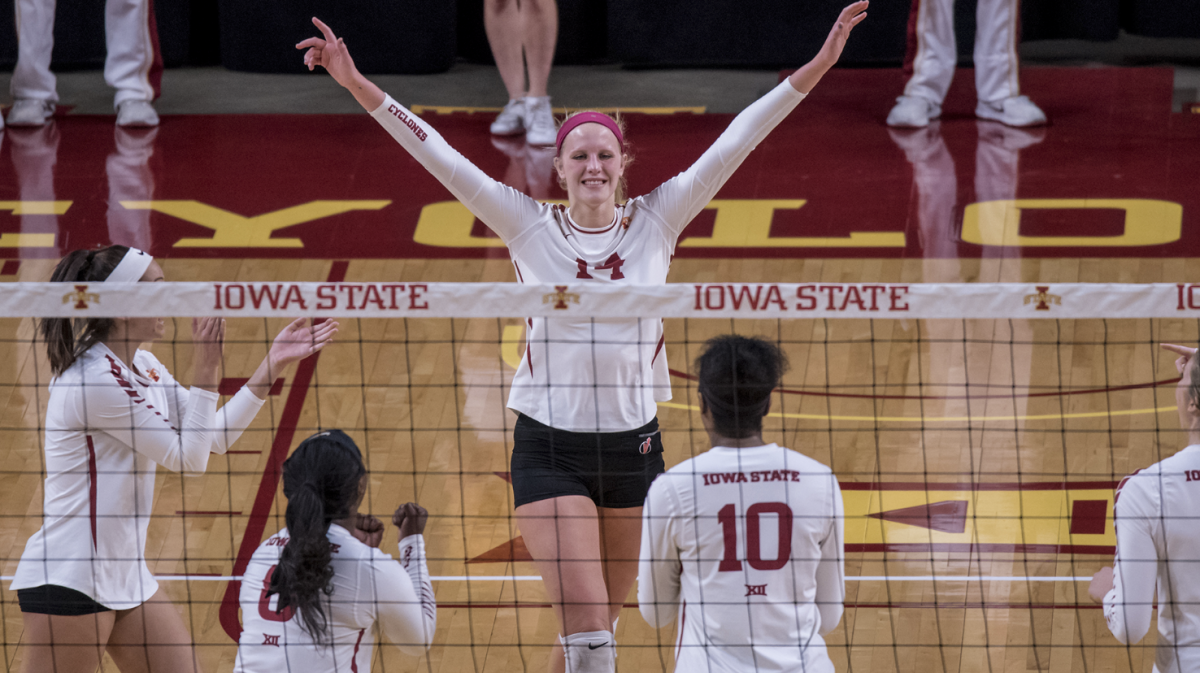 AMES, Iowa – A pair of dominant hitting performances helped Iowa State advance to the second round of the 2017 NCAA Volleyball Championship with a 3-0 (25-21, 25-17, 25-14) sweep of Princeton Friday night at Hilton Coliseum. ISU advances to Saturday’s second-round match against Wisconsin with a 22-6 overall record. Princeton ends the season with an 18-8 record.

Grace Lazard tied a career-high with 14 kills at a .522 hitting percentage, while Jess Schaben had a double-double of 14 kills and 11 digs. Monique Harris got her 12th double-double of the season with 35 assists and a match-high 16 digs.

Iowa State was pushed out of a sluggish start via Grace Lazard. ISU’s British middle blocker got herself a pair of kills a pair of blocks and an ace to fire off a 8-1 run to get the Cyclones ahead 12-7. The Cyclones hit .350 for the set, led by five kills from Grace Lazard. The Tigers were able to stave off ISU’s first three tries at set point, but the Cyclones locked it up on Lazard’s fifth kill of the set at 25-21.

The Cyclones could not pull away from the Tigers early in the second and eventually paid for it as Princeton went on a 3-0 run to get ahead 12-10. After not getting a block on the board in the first set, the Ivy League champs got three in the first half of the frame. Out of the media timeout, Iowa State showed some great hustle on defense to keep a rally alive, which led to a Jess Schaben kill. That was the spark the ISU squad needed, as the Cyclones closed the set on a 12-2 run. The Cyclones got ahead 2-0 when Schaben got her seventh kill of the set at 25-17.

ISU clicked in all areas of its game in the third set. The attack hit .452 as a team, behind the service line the Cyclones got three aces and at the net ISU finished the match with 3.0 blocks in the frame. It was a 6-1 Cyclone run early on in the frame that put the Cyclones ahead for good, and the ISU lead would get up to as many as 12 points. Iowa State secured its advancement to the second round when Natasha Skov’s shot missed the mark at 25-14.

Player of the Match

Grace Lazard. The junior middle blocker from London had a monster match to help advance Iowa State to the second round. She tied her career-high with 14 kills at a .522 hitting percentage while also recording two aces and two blocks.

Iowa State advances to tomorrow’s second round match against No. 11 Wisconsin. First serve between the Cyclones and Badgers will be at 6:30 p.m., with Cyclones.TV Powered by Mediacom televising the match and providing a free live stream, here. Tickets to the match can be purchased on cyclones.com, here or starting one hour before the match at the Hilton Coliseum Ticket Office.

VOLLEYBALL: Cyclones advance to the second round