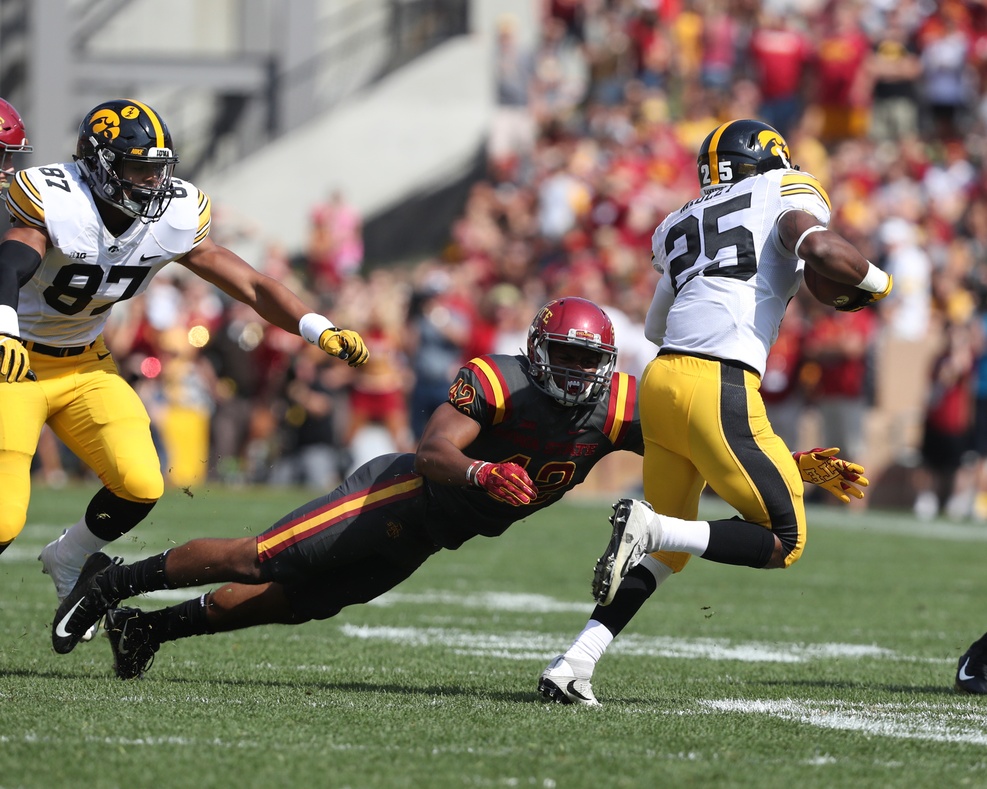 AMES — Marcel Spears teamed with Joel Lanning to drop Akrum Wadley for a three yard loss on first down. Iowa led Iowa State 21-17 with less than 4:30 to play in the third quarter.

On second down, Spears combined with Willie Harvey to stuff Wadley for no gain. On third down, Spears flew forward at full speed to drop Wadley for another three yard loss before he could even take a step after receiving a screen pass.

The three consecutive plays by Spears, who finished the game with a career-high 17 tackles, forced an Iowa punt. Six plays later, Iowa State took a 24-21 lead on a 30-yard touchdown pass from Jacob Park to Hakeem Butler on fourth and one.

The lead would not hold in Iowa State’s 44-41 overtime loss to in-state rival Iowa on Saturday at Jack Trice Stadium, but those three straight plays by Spears did give a preview of what could be to come from the sophomore from Olathe, Kan.

“I think I told you a little bit about my thoughts on Marcel going into the season,” Iowa State head coach Matt Campbell said after the game. “I know one thing as a football coach, one thing you always ask your kids to do is make you play me, right? That young man did that to us this spring. His spring was so good that he needed to be a starter on our football team and needed to be playing max reps. I’m really proud of what he’s done. I thought the first two games he’s been outstanding. I think his future’s really, really bright for us.”

Matt Campbell on Marcel Spears’ performance against Iowa in this #CFTV. pic.twitter.com/RlTVWqgmIp

Spears’ performance was the first time a Cyclone had recorded 15 or more tackles since Jevohn Miller and Luke Knott had 15 a piece in a 2014 loss to Baylor.

It was the most tackles recorded by a Cyclone in the Cy-Hawk game since (at least) 2004. It could be even longer, but I could not find the individual defensive stats from the series past that season.

What’s the point of telling you all these stats? To hammer home the point of how good Spears was on Saturday. He was simply all over the field, including creating 1.5 of the Cyclones’ nine tackles for loss in the game.

“Just in my head (I kept) telling myself, ‘Just keep working. Don’t stop until the clock hits all zeros,’” Spears said. “That’s what motivated me. I wanted to win, but you know…”

When Spears is playing at this level, it makes Iowa State’s defense pretty dang good. They gave up 497 yards on this day, 164 of them on the ground, but they held Iowa’s highly-touted rushing attack to only 61 yards on 21 carries in the second half.

The kid who made Coach Campbell start him was a big reason why.

“He was out there playing and that’s the type of player he is,” Lanning said. “He’s so energetic and plays fast all the time. He made a lot of tackles and that’s we needed from him.”